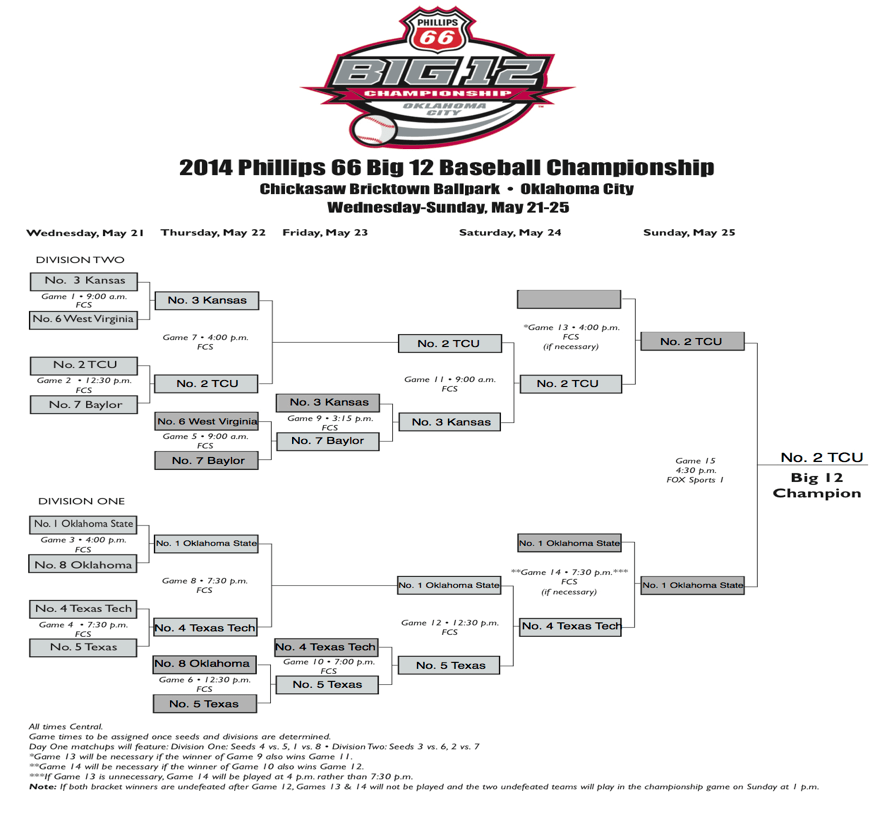 I looked at who the contenders are and what a tournament win would mean for each squad in Part I. 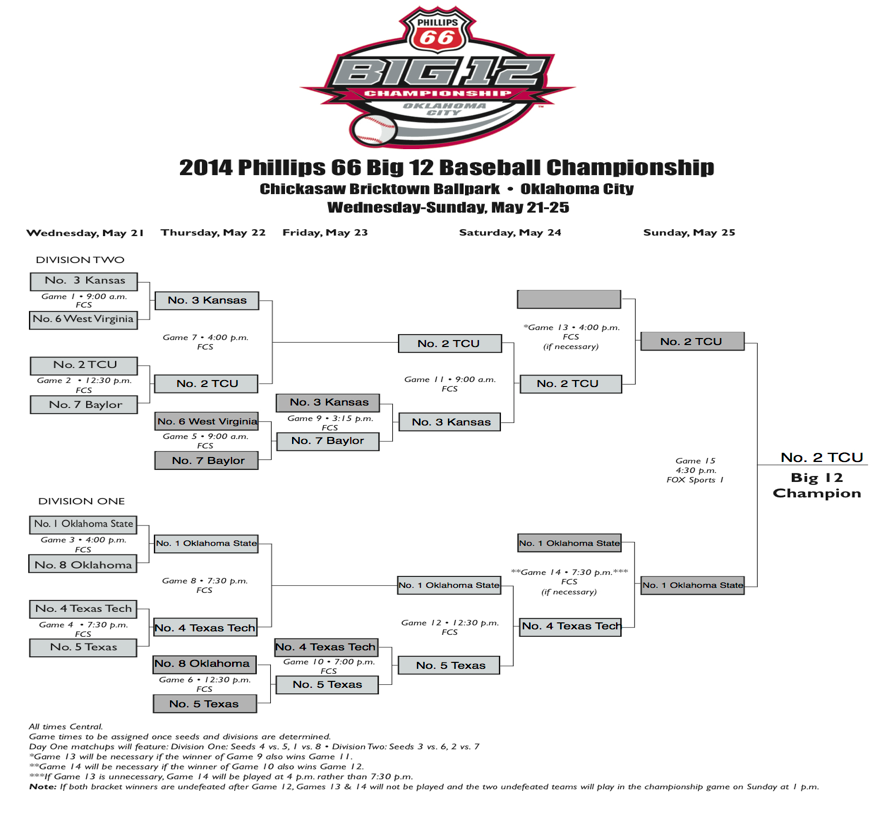 Losing to OU in the last game of the regular season – and losing the 12-game win streak in the process – should have left a sour taste in the mouths of the Cowboys. Whether it was just an off game, or the Big 12 title from the night before getting to their heads, we don’t know. But this will be certain: Holliday will have the troops focused and OSU will get its first Bedlam win in the Big 12 Tournament.[1.OSU is 0-8 all-time against OU in Big 12 Tournament.]

With the same logic, TCU will take care of Baylor after dropping one game against them last weekend. Kansas is on a roll and will take care of West Virginia, a team it swept a few weeks back. In the last first round game, look for Texas Tech to edge out a Texas team fighting for a better Regional draw.

The seeding holds true as OSU and TCU advance to the semifinals, while West Virginia and OU head home early. Texas will get the better of Tech in Round 3, while KU forces a rematch with TCU.

The Horned Frogs pitching is too much for the Jayhawks, and OSU rides a wave of confidence past UT after winning the series in Austin earlier this season. This sets up the dream matchup everyone wants, with the winner likely walking away with a national seed. The Cowboys lose in a pitcher’s duel, with the lack of experience and tournament struggles of years past holding OSU back.

Each team has a calling card, and whoever wins this thing can thank that card for getting it there. If it’s TCU, MVP honors will go to either Preston Morrison or Brandon Finnegan. Whoever pitches two games this week will take the award; my bet is on Morrison, the conference’s leader in ERA at 1.18.

If the title comes back to Stillwater, Jon Perrin or Vince Wheeland will be the man to thank. Both guys have done it all for the Cowboys this season, with Perrin starting and Vince in relief.

If Kansas takes the title, the MVP will go to Frank Duncan. The senior starting pitcher leads the league in innings pitched and is third in strikeouts. He is KU’s go-to guy this year, and the Jayhawks will need every pitch he has left if they want to win the title.

For Tech, the man of the hour will be Eric Gutierrez. He has 12 home runs and 55 RBIs on the year, both numbers leading the conference. And when he’s not putting the ball over the fence, he’s still getting on base – he’s fourth in the Big 12 with a .429 OBP, and is the catalyst for the Red Raider offense.

Be sure to check in throughout the rest of the week, as I’ll be providing updates on the tournament.