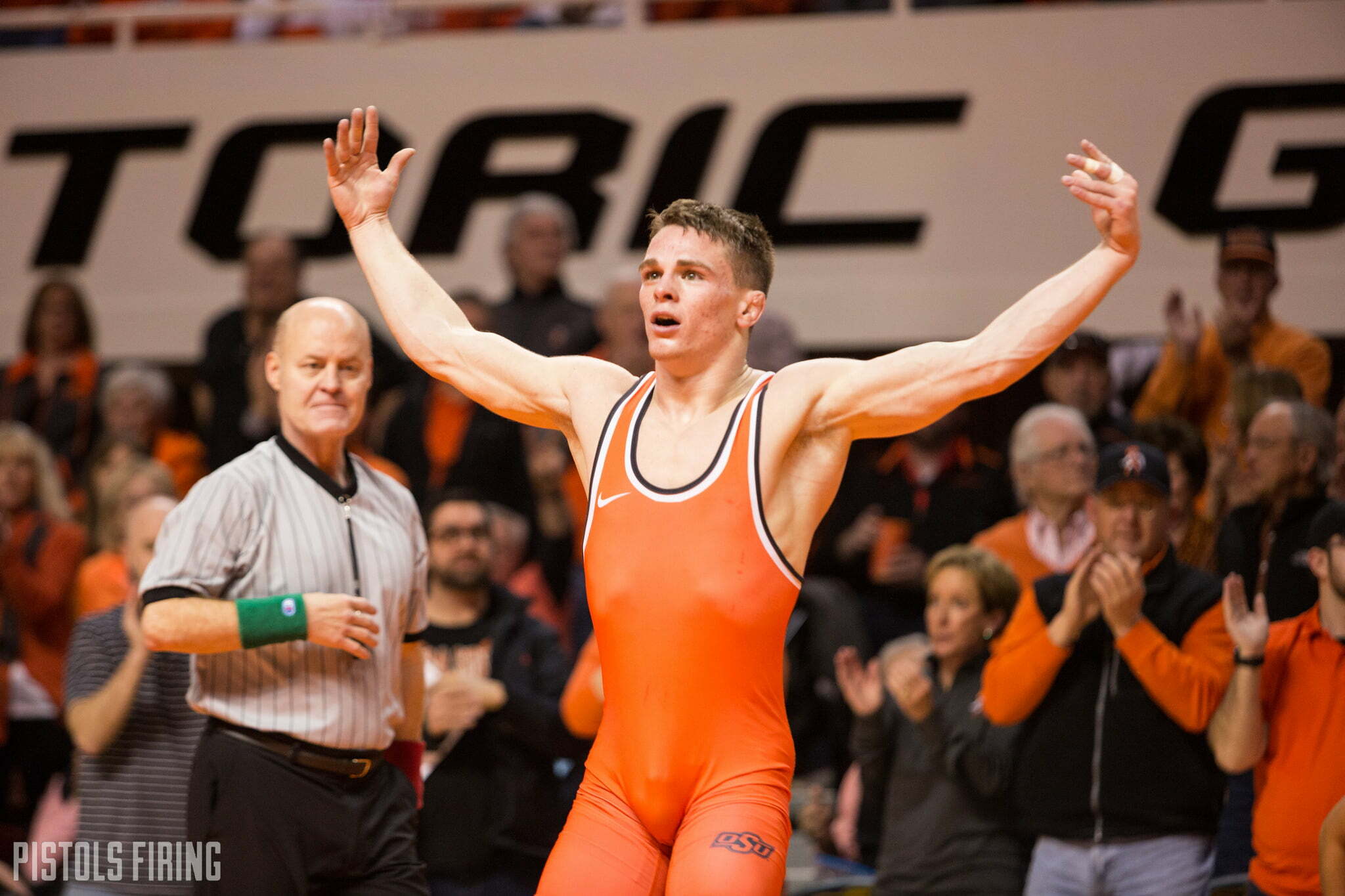 It’s absolute chaos in Tulsa, as the underdog Oklahoma Sooners have put themselves in a position to win the Big 12 Tournament title over their rival Oklahoma State.

Here’s how the team scores finished up after the morning session.

OU has an eight-point lead with three finalists. Oklahoma State matches up with the Sooners at 133 and 149, while OU has another finalist at 141. OSU has AJ Ferrari at 197.

Placement points are given at each round as they’re earned. So, all finalists have already received their second-place points. They can add an additional four to their tally by winning their finals matches.

Simple math, if OSU wins at 133 and 149 by regular decision (they are favored in both), they would tie the team race. If the Cowboys receive any bonus points (Fix has bonus-point wins in both of his previous matches with his opponent here), OSU could hold a lead.

OU has a finalist at 141. If Dom Demas wins that match, OU would gain four points for OU, and OU will have a lead in the team race regardless of what happens at 133 and 149.

If Fix wins and gets bonus at 133, Demas (OU) loses at 141 and Boo Lewallen wins at 149, the Cowboys would lead the tournament after 149 and would win, barring any team points being deducted.

Any scenario where OU gets bonus point wins (pin, tech-fall or major decision) would require OSU to match those bonus points in one of their matches to be able to tie or win.

The two most likely scenarios as I see it, are this:

I also wouldn’t count out Mitch Moore from OU at 149. Boo has two wins on him this season, but by far the most plausible upset in a direct matchup between OU and OSU is Moore beating Boo.

If that happens, OSU still has a chance as long as Demas also loses at 141.

Mathematically both Wyoming and Iowa State are still in the team race, but both would need flawless rounds and few breaks with both OU and OSU losing, which gets really complex when you consider the direct matchups that OSU and OU have with each other. If OU loses at 133 that helps allow Wyoming catch OU, but adds points to OSU’s total.

A realistic scenario for Wyoming is for OSU to win at 133 and 149 by decision and OU lose at 141. If Wyoming were to then win every single finals match, they would finish with a 1.5-point lead over Oklahoma State and OU, who would be tied for second.

A realistic scenario for ISU is winning every match and getting bonus at 157. If they lose at 141 they’re out as they wouldn’t be able to catch OU. But if they win all three, OSU loses at 197, and Wyoming doesn’t win all of theirs, ISU could win.

Buckle up, this could get crazy.