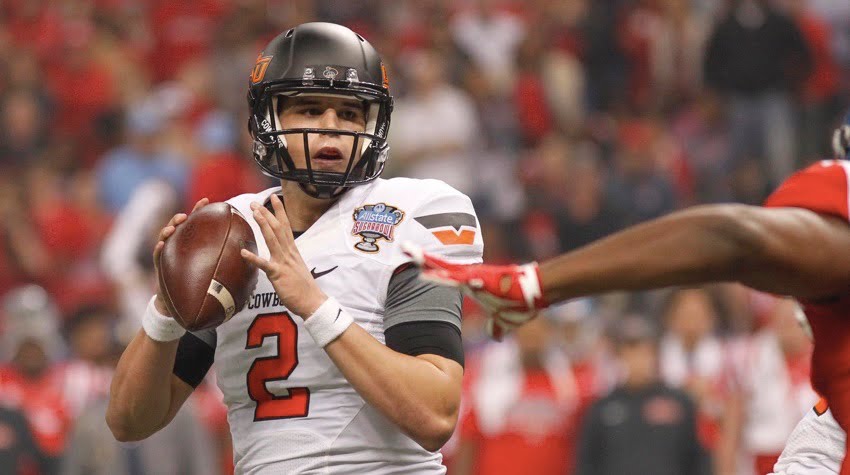 Oklahoma State fans know as well as maybe any program in the country that a good backup QB comes in handy. In 2012 injuries led to OSU starting three different quarterbacks throughout the season. In 2014 J.W. Walsh started the season against Florida State, then injured his foot in a win over Missouri State. Later in the year, a concussion knocked Daxx Garman out of his starting job and introduced the Rudolph era.

With so many teams in our conference dealing with QB carousels in recent years, I thought it would be interesting to see what Big 12 teams over the last five seasons have reached the farthest down their QB depth chart – whether by choice or necessity.

For this analysis, I pulled every passing attempt for Big 12 teams over the last five seasons. I did not include a player’s attempts if they had three or fewer attempts in a game – this was an attempt to weed out light mop-up duty and trick plays. The table below shows each team’s QB1 through QB5 in a given season.

Here’s the full chart with every QB listed by name.

• “QB1” in this context does not necessarily mean the QB who started the season – it is the attempts leader for each team during that season. For example, Wes Lunt started the season in 2012, but Chelf had the most attempts that year so he is QB1 in the table.

• The median depth rating was 1.35 in the 50 seasons covered in the table. OSU’s 2015 season was representative of a median QB rotation – QB1 using around 83% of the snaps, QB2 with almost all of the rest.

• OSU had only 1 season in the last 5 that was materially below the conference median – Weeden attempted 95% of OSU’s passes in 2011.

• Who’s had it worst? Iowa State has the highest 5-year average at 1.83 (about on par with the Walsh/Garman/Rudolph season – not fun). Some of that is by choice, of course – just as OSU’s 2015 Walsh package led to a higher score. OSU’s 1.75 average is the 2nd highest in the conference.

• Who’s had it easy? K-State has the lowest 5-year average at 1.16, largely due to having three seasons where their starting QB used 96%+ of team attempts. OU has the 2nd lowest score at 1.28.