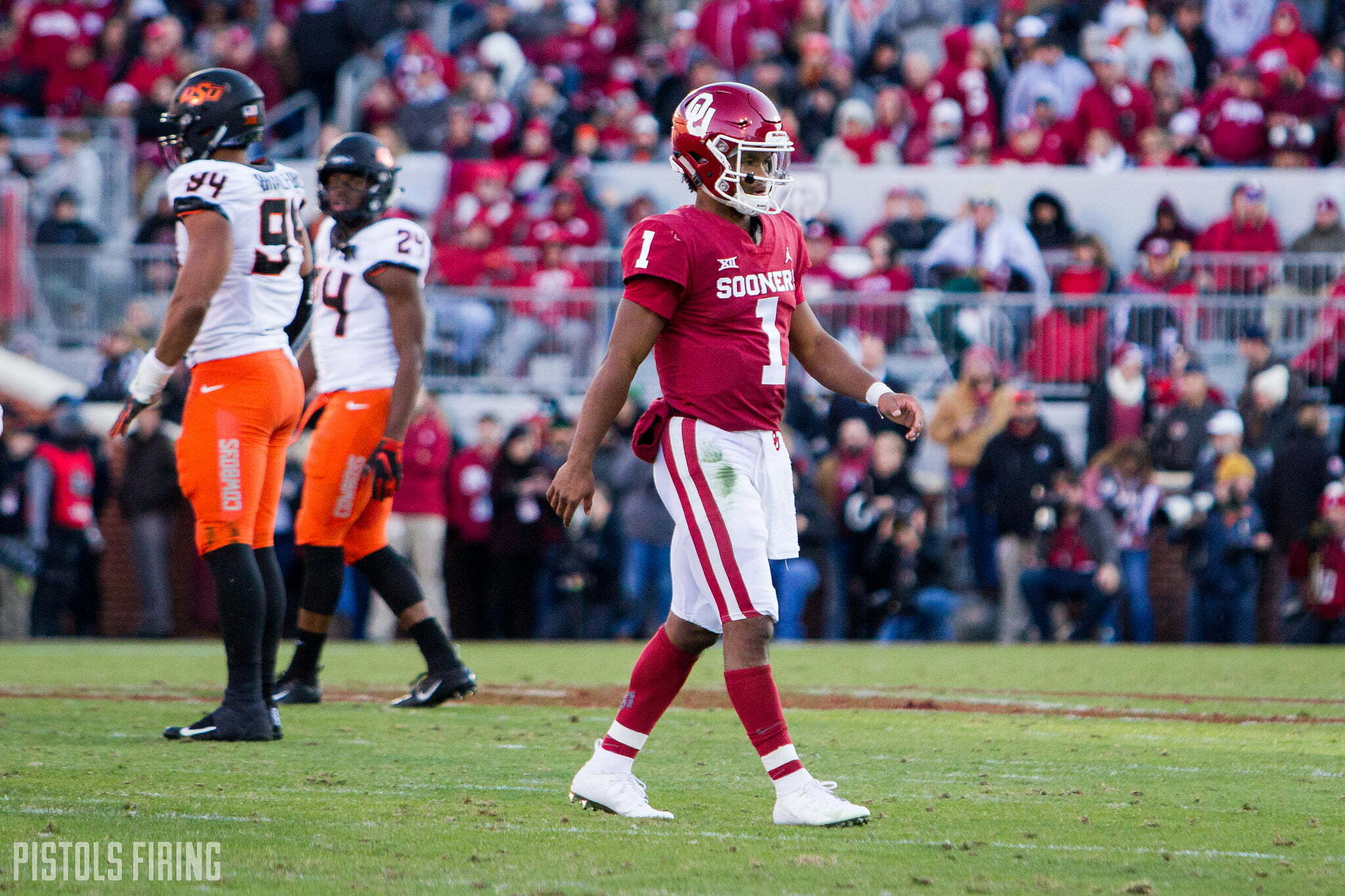 A suddenly bowl eligible Oklahoma State will end its regular season in Fort Worth on Saturday against a TCU team trying to securing its own postseason bid. That game means plenty to both teams, but it has little effect on the Big 12’s landscape, unfortunately.

But in nearby Arlington, plans are already underway for the conference’s championship game which will be held at AT&T Stadium on December 2. Equipment is on the ready, suites are reserved and the menu is set. Tickets have been on sale for nearly two months. The only thing missing from this formal banquet is a finalized guest list.

There are now three suitors fighting to fill two reservations, and it will all come down to a pair of games played on Black Friday. At 11 a.m. Kansas hosts Texas on FOX Sports 1, and then in the primetime slot West Virginia hosts Oklahoma at 7 p.m. on ESPN. These are essentially play-in games for Texas and OU.

Between Texas and its title game seat lies just one (what should be) relatively easy win in Lawrence. Tell that to Charlie Strong. Beat the Jayhawks Bevo-less and the Longhorns are in. A Sooner victory in Morgantown ensures a No. 1 seed and the home team treatment for Lincoln Riley’s crew. It would be his second in as many tries.

But if West Virginia beats Oklahoma for the first time since it joined the Big 12, things get dicey for the crimson crew. Lose to Kansas and the Longhorns are out as owners of a head-to-head loss to West Virginia. ??

An OU loss and a UT win would give us a three-way tie for first with the Sooners, Longhorns and Mountaineers each at 7-2 in conference play. The Big 12 has laid out tie-breaker rules for just such an occasion, but it gets pretty complicated.

There’s actually a scenario where Oklahoma beats WVU and Texas losses to Kansas (and Iowa State beats K-State) which gives us a three-way tie for second place between the Mountaineers, the Longhorns and the Cyclones. Either way, those tie-breaking procedures would sort things out nicely without any controversy any chance of controversy or hand-wringing. ?

Of course, the Jayhawks are the wild card here. After somehow finding enough life to hang 40 on a maligned Sooner D, the Rock Chalk squad probably has a little bit of confidence and momentum to go with what should be a nothing-to-lose attitude.

What am I talking about here? This is Oklahoma. That is Kansas. If I was putting any money down at all, I’d say we see a Red River Rematch in Arlington for all the marbles (the Big 12 brass’ dream scenario).

West Virginia’s back-loaded schedule is exposing them as blue and (fool’s) gold. While I agree that Oklahoma’s defense stinks, I think the difference in WVU’s offense and OU’s is more detrimental to the Mountaineers than the differences in the two defenses is to the Sooners. Translation: I don’t think it matters how many points West Virginia scores, they can’t out-score the best offense this side of Bama.

As far as the morning game goes, I think the upset is fun to think about but I can’t sell myself on the prospects of Kansas having that much effect on the league’s direction. It’s just been a hapless bystander for too long. Maybe that changes in the near future with the Mad Hatter, but not yet.

Give me the Sooners to exact revenge on the ‘Horns in Jerry World and win their fourth-straight league crown. And like it or not, that’s probably the best thing for the conference on the whole. I’d love another team to rise up and challenge them legitimately and consistently — I’d really love that to be Oklahoma State — but until then, the conference needs a flag bearer with enough brand value to appear relevant and Lincoln Riley’s crew will oblige.

Hopefully, we get to see Curtis Bolton give the down Horns gesture so we can see if what’s good for the Mountaineer goose is good for the Sooners gander. It’s 9:46 p.m. and the Big 12 still sucks.