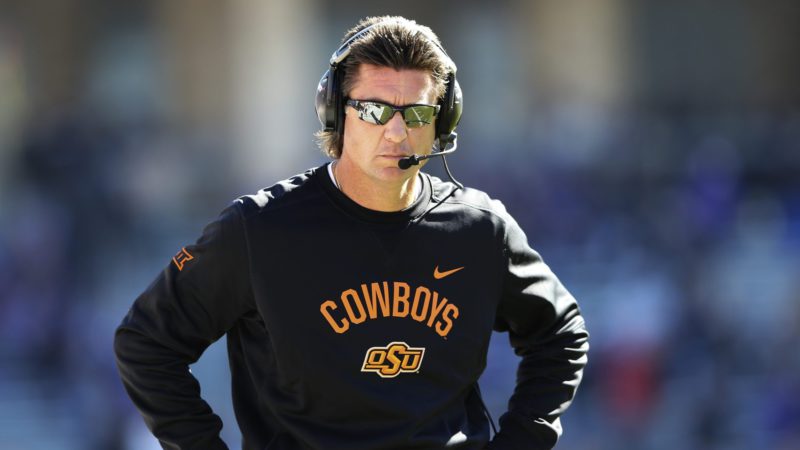 Ahead of this weekend’s Bedlam Big 12 title game, ESPN’s Jake Trotter went in-depth on Mike Gundy’s polarizing hair style. Several OSU players chimed in on their head coach’s do that’s taken on a persona of its own. This from Mason Rudolph is incredible.

“The first time I discovered it was on the flight to media day,” Rudolph said. “I was like, ‘Has he not gotten a haircut? Or is he actually trying to do it?'”

The mullet has even gotten love from the other side of Bedlam as Baker Mayfield called it “dirty” and Bob Stoops admitted he’s a recent convert.

The Cowboys are amassing country singers to their camp. ESPN spoke with former “mulleteer” Billy Ray Cyrus about Gundy’s mullet.

“Coach Gundy rockin’ the mullet? Yeah, shows class — and brass!” said Cyrus, who once wrote homage to mullets. “More importantly, he’s a great coach. He has inspired me. The team inspires me. I hope they run the table.”

Cyrus would know a good mullet when he sees it, too.

The best quote of all is from Mike Gundy’s defensive coordinator, Glenn Spencer.

“I just love looking at it every day,” said Oklahoma State defensive coordinator Glenn Spencer. “It’s one of the highlights of my day to see where it’s coming down his neck and touching his collar and now it’s below the collar. You come in the office every day and you check it out, see what’s happening with it. “The wind will catch ahold of it and it’ll look like a kite with a tail every now and then.”

It is truly a special time to be alive. You should go read the entire piece — it is amazing.