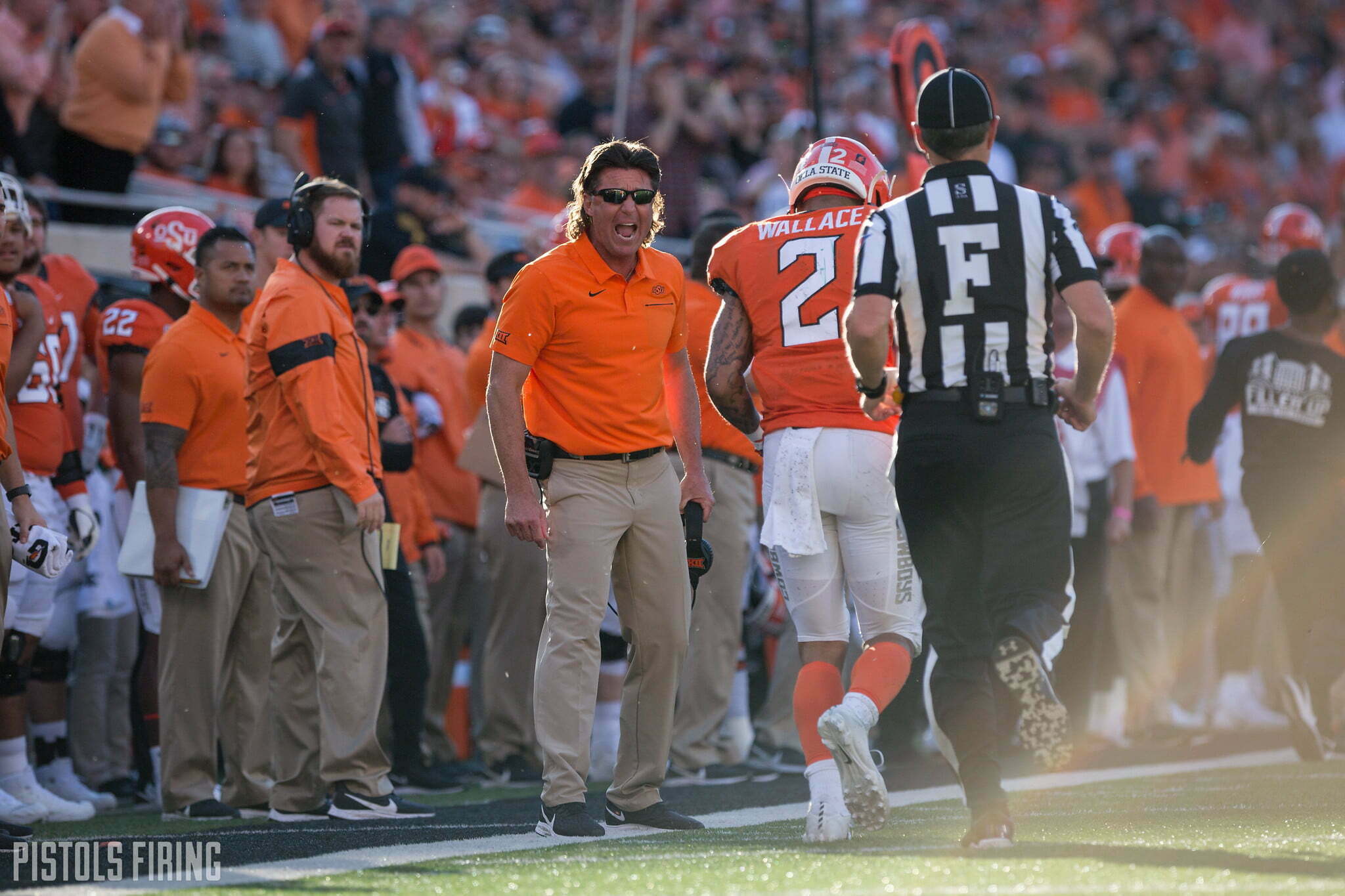 I’m giving Mike Gundy an A for his effort. As he stood at the dais on Monday afternoon in search of a new explanation for why his team fell flat at home as a favorite, he really tried to sell it this time.

He assured us that the program is “on as good a ground as it’s ever been.”

He confidently described the litany of mistakes being made as correctable.

And for good measure, he made sure to reinforce that, despite public perception, he’s as frustrated as anyone. Maybe more so. He even said the B word twice, either to prove his point or to scare everyone off from watching the rest of a forgettable and somewhat-jarring press conference.

I buy that he’s frustrated. I believe the mistakes are correctable. I’m iffy on just about everything else he said. Let’s go statement by statement. (For full context, check out Marshall’s excellent rundown from his media availability on Monday.)

1. “It’s a fair question, but the fan base needs to know this: If you want to help OSU football, come to the games. If you want to help OSU recruiting, come to the games and be supportive and trust that I will do my job, the coaches will do their job and the players will do their job. If not, I’ll fix it. That would be the very best thing everybody can do.

Of all the statements Gundy made Monday, this one irked me most. Essentially what he’s saying here is that if you’re upset with the product being put on the field, you should … come to more games? OK.

And if you’re upset about how recruiting is going, you should … come to more games? Again, OK.

But hold up — shouldn’t one come before the other? This is a chicken or the egg situation. Gundy’s essentially saying it’s the fans’ job — y’know, the fans who pay money for tickets that goes toward Gundy’s salary — to ensure a quality product is being put on the field. What are we even talking about here?

Moreover, FANS ARE DOING THEIR JOB. I analyzed attendance data since 2015, and average home attendance during that span is a whopping 55,345 per game. This isn’t Rutgers, where the product stinks and fans would pay to not watch games. That’s big-time attendance for what has, until late, been a big-time program in terms of wins and accolades. (From 2009-2016, max capacity at Boone Pickens Stadium was 60,218; max capacity in 2017 and 2018 was 56,790; max capacity this season is 55,509.)

As for recruiting …. really? The program peaked when OSU won a Big 12 title in 2011, and attendance only took off from there. Only problem is, unlike Gundy’s logic — that more attendance equals better recruiting — the program’s recruiting slowly trailed off. In the 2019 cycle, OSU is being out-recruited by Les Miles and Kansas, for instance, and currently rank in the bottom half of the league. Only thrice has OSU finished fourth or better in the Big 12 in recruiting rankings, and while attendance has been steady, recruiting has stagnated. Here’s the trend of OSU’s recruiting since 2010:

2. On if he feels cornered: “No. I have been cornered before, but I don’t feel that way now. I’m good. I’m excited. I like the potential. I like the youth. I like the direction we’re going. I see where we’re at. I see what we’re doing.”

If your coach likes the direction of a 4-3 team on pace to win six (and I’m being generous) games, there might be a problem. OSU is 1-3 in Big 12 play. Only Kansas has a worse record in league play, and Kansas is out-recruiting Oklahoma State. Kansas!

3. Here comes the big one: “My glass is always full, and I’m not concerned for one second about the team. Do I wish we’d played better in the fourth quarter? Yes. Do I wish we wouldn’t have turned the ball over as much at Tech? Yes. But if I even worry about what I thought about walking to this press conference, my profession would be extremely difficult.

“But I certainly understand how and why people think that way. I would ask them to do this. I would ask them to reflect on a teenager and the mistakes that teenagers make. Then as a parent you sit there and think, ‘How can that happen? I’ve been doing the best I can to parent him. I can’t believe he went around to the back of the school and smoked a cigarette.’ Why’d he do that? Either you’re a bad parent or that’s a bad kid. That’s not necessarily true. That’s just kinda life.

“People say, ‘Well how do you make that comparison?’ Because I got three kids at home. I don’t know if they smoke or not, but I know this, I know that I parent them to not do something and they still do it. So I correct it and move forward. So far, they’ve turned out OK. Anything can happen, but periodically the same thing happens in football.

This is a long one! There’s a lot to unpack here, so I’m not going to tackle all of it. My main takeaway, though: I’m not entirely sure what he’s getting at. The story he tells turns out to be one long, grandstanding deflection from the fact that his team stinks. And just like every week, he’s deflecting. The “we’re gonna fix it” and “that’s life” stuff is malarkey. It means nothing.

Of course, he doesn’t really have a choice other than to say what he said because my quarterback is experiencing growing pains or maybe I hired the wrong defensive coordinator won’t do the job. But all offseason he vowed to fix what was broken, to clean up little mistakes, to right in 2019 the 2018 wrongs. Only here we are halfway through the season, and OSU’s facing down a tremendously difficult schedule and trending an increasingly wrong direction. Even a double shot of ambien might not be enough medicine to get to December unscathed.