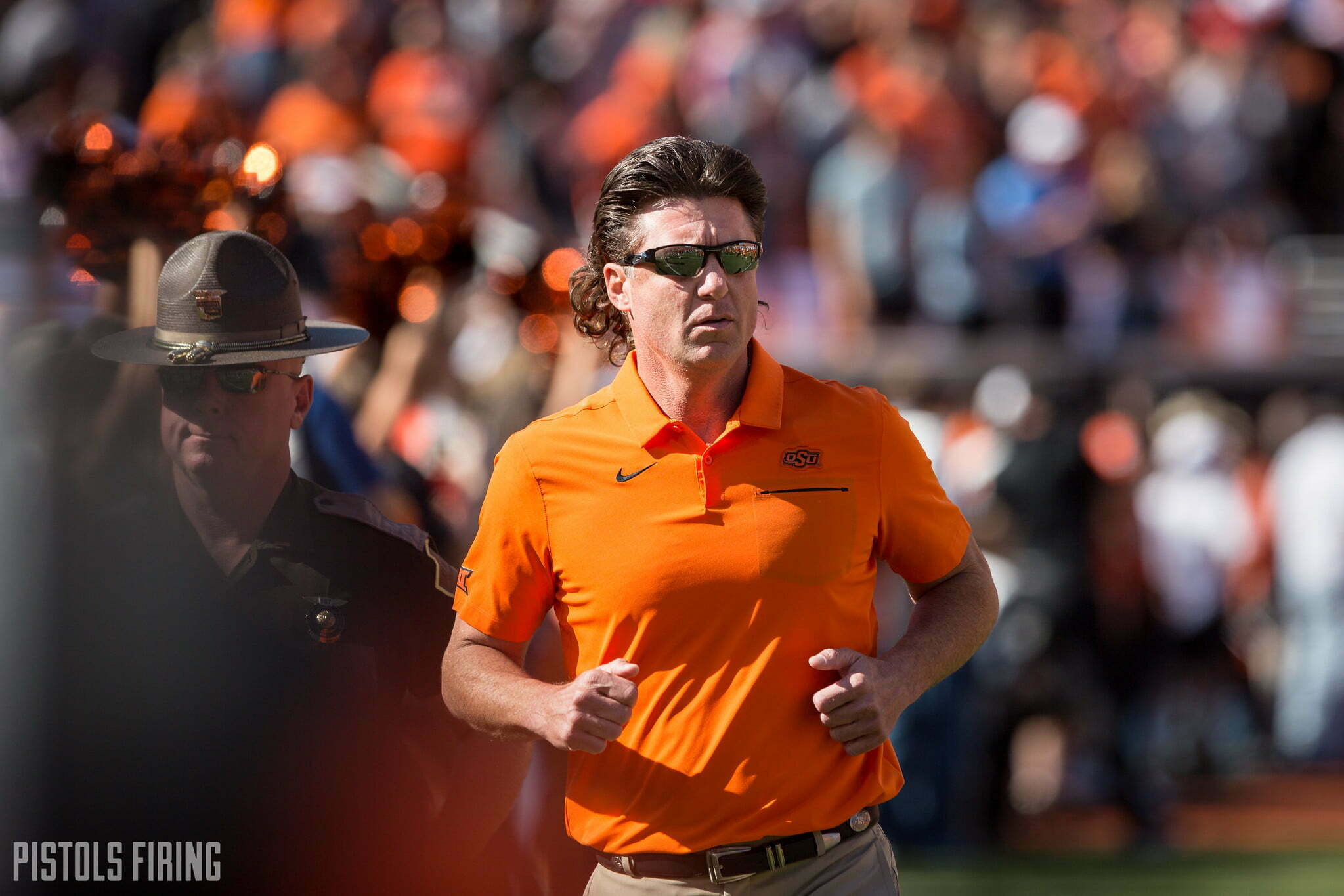 STILLWATER — Mike Gundy had a different tone at his Monday media luncheon.

The usually cool, laid-back Oklahoma State coach spoke a little louder and expanded on his thoughts a little deeper than usual, heading into his 4-3 team’s game against No. 23 Iowa State. Here is a breakdown of everything Gundy said.

• OSU had a good, enthusiastic work out Sunday night.

• Without giving any specifics, Gundy said his team is “in good shape health-wise.”

• On at what point he would entertain a change at quarterback because of the turnovers: “If the guy that’s playing has unforced errors and then mentally is not aware of it and trying to clean it up would be the only way.”

• The O-line play at the beginning of the game wasn’t good, but it was “pretty good” from about halfway through the first quarter on.

• “To play quarterback at any level, particularly high school, college and beyond, you have to have good ball security on the pocket. Period. You see some quarterbacks get away with it. Watch the guys that are veterans that have hung around and played forever and been successful. … There’s a lot going on for a quarterback, and as soon as you start to (take one hand off the ball), you’re asking for it. You might get away with it, but you’re asking for it.

“We worked hard on it for two weeks. He was better. If you have the tape, you can go back and watch it. Throughout the game, he was much, much better. He put one on the ground in the fourth. They picked it up and ran it in for a touchdown. Made it look worse. Glaring mistake. If they just recover it and get on the ball and we hold them to a field goal it’s different. Should’ve, would’ve, could’ve, whatever. That’s his responsibility. Forget the offensive line. He knows that. He understands that. He will accept responsibility for that. We’ll continue to work and get him better.”

• Quarterback ball security is trained in drill work with quarterbacks holding a ball and coaches hitting them in the arms with a dummy.

“Arguably the most decorated quarterback to play here ever, other than me, was Mason (Rudolph). I saw Mason against Oklahoma pull an RPO and throw it right to a safety in the back of end zone on first-and-goal from the six-yard line. I don’t have any idea why he did that.

“Now (Sanders’) demeanor and the way he handled the offense, I’ll just come clean with you because I told you guys he got flustered at Tech. He became emotional. He was good (against Baylor). He was like a seasoned veteran. He was fine. He was communicating. He got off the field. He talked to Sean (Gleeson), and he was doing really well. He understood it. He got it, and even when he missed reads. He’s gonna miss reads. When Mason was at his best here, he would still miss a couple reads in a half. That’s normal. There’s a lot going on out there. I think (Sanders) missed four total in the game. For a guy in his progression, at his age, there’s nothing wrong with that. That’s gonna happen.

“All of that was good. Forget the throw at the end of the first half. If he doesn’t drop the ball, and they don’t pick it up and run it in for a touchdown, we’re not really having this discussion. He had proved that he had gotten better. He will get better each week. I guarantee you. The guy coaching him knows what he’s doing. He will get him better. And Spencer is a very prideful young man. The only issue he has to work on is thinking he can play a perfect game. He’ll accept responsibility. He’ll tell you he’s wrong. He’ll tell you it’s his fault. In a game, he wants to play a perfect game, that’s not gonna happen.”

• “You play a good round of golf. You get on 18 and you got a chance to set the course record, and you hit a triple-bogey. Nobody ever talks about what happened. That triple-bogey screwed you up. That’s what he did.”

• “We played better in that game than we did the game before. We just played a team that overall right now is a pretty good football team. They don’t make a lot of mistakes. Their quarterback’s a veteran guy. He’s savvy. He’s slippery. He’s a good football player. And they’re tackling well on defense. They got two guys who can rush the passer, and they got a nose guard that can drive your center back. Those are pretty good combinations for today’s game.”

• Baylor and Iowa State’s defenses are similar, but Iowa State has blitzed more this season.

• Here comes the big one: “My glass is always full, and I’m not concerned for one second about the team. Do I wish we’d played better in the fourth quarter? Yes. Do I wish we wouldn’t have turned the ball over as much at Tech? Yes. But if I even worry about what I thought about walking to this press conference, my profession would be extremely difficult.

“But, we also live in a society today where people want to b—- and complain about everything instead of putting their pants on and go fix it. We’re gonna fix it. Nobody around here’s gonna b—- and complain, from me to a coach to a player to anybody that works in that building over there. That’s the way it works. That’s the way that we’ll get better.

“But I certainly understand how and why people think that way. I would ask them to do this. I would ask them to reflect on a teenager and the mistakes that teenagers make. Then as a parent you sit there and think, ‘How can that happen? I’ve been doing the best I can to parent him. I can’t believe he went around to the back of the school and smoked a cigarette.’ Why’d he do that? Either you’re a bad parent or that’s a bad kid. That’s not necessarily true. That’s just kinda life.

“People say, ‘Well how do you make that comparison?’ Because I got three kids at home. I don’t know if they smoke or not, but I know this, I know that I parent them to not do things and they still do it. So I correct it and move forward. So far, they’ve turned out OK. Anything can happen, but periodically the same thing happens in football.

“It’s a fair question, but the fan base needs to know this: If you want to help OSU football, come to the games. If you want to help OSU recruiting, come to the games and be supportive and trust that I will do my job, the coaches will do their job and the players will do their job. If not, I’ll fix it. That would be the very best thing everybody can do.

“Now, if you want to complain and all that, I’m good, but you still need to come Saturday and show up. That helps recruiting. That helps Oklahoma State football, and we’ll get it solved. We’ve been in this situation before. It’s actually not as bad as we were in however long ago it was. Whatever year that was.”

“The youth on this team right now, the development, the classes that we have redshirted, the players we have, the overall attitude, there’s nothing to worry about.”

• He again states the turnovers and big plays the defense allowed cost OSU the game against Baylor.

• Gundy said he went to bed at 11:30 p.m. but went to work at 3:45 a.m. because he couldn’t go back to sleep. “Roger was working here, the guy that cleans everything. When I walked in, he thought we played so poor he handed me a broom.”

• On Brock Purdy: “He’s a savvy quarterback. He’s very good. I think he’s gonna play in the NFL. He’s somewhat unusual mobile for his size, and he’s strong for his size. I think he’s 215, 220, something like that. Doesn’t look that big. He’s a good football player and  doesn’t make a lot of mistakes. We drew the short straw last year, and they brought him out against us. He’s been in ever since, and he’s played well.”

• OSU’s defense got hit in “the exact right spot” a few times. Those were coaching errors, Gundy said.

• On if he feels cornered: “No. I have been cornered before, but I don’t feel that way now. I’m good. I’m excited. I like the potential. I like the youth. I like the direction we’re going. I see where we’re at. I see what we’re doing.”

• OSU sacked Charlie Brewer four times, but it should’ve been eight. Gundy said he credits that to Brewer.

• On the fake punt: “M.K. (Taylor) and Cash (Patrick Cashmore) do a great job with that. Brought it in, and we do every week, we have fakes in every segment. There’s no secret that way everybody knows. They either give it to you or they don’t. We had it, and it was there and we took it. Everybody executed it. It was well-planned and prepared well. Patience is key in fakes, and the Aussie dumped one up there. He had kind of a run, jog throw. I’m not sure where it came from, but it was a heck of a throw. It worked good. If you look in the big picture, that should’ve been the difference in winning the game because we got an extra possession. But, it ended up not being that way because we turned it over and gave up two big plays.”