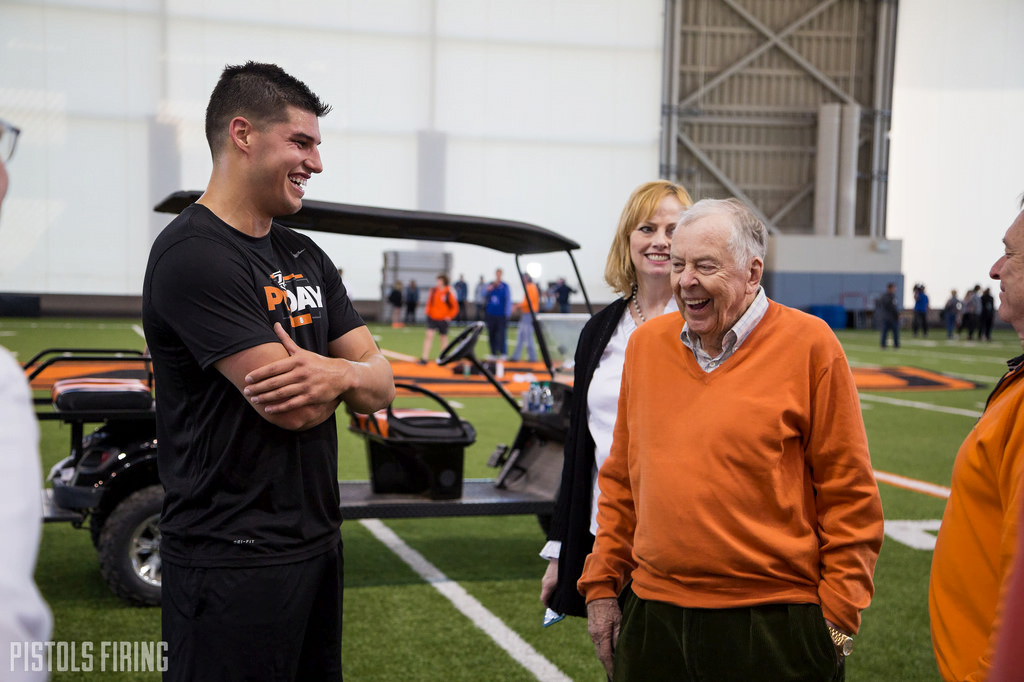 Boone Pickens is heading up to Stillwater on Thursday for the first game of the 2018 Oklahoma State football season, but he won’t hold his normal media scrum. Instead, Pickens released a message on Wednesday about his expectations and what he thinks about the Pokes these days. He also discussed his health, the future of his legacy and why OSU will name its future athletic village after somebody who talked crootin on a podcast with two morons on this site.

In all seriousness, the message is incredibly touching and both reflective and exciting. Mr. Pickens has seemingly always embodied both qualities, and it’s been enjoyable (if a little sad) to get a bit more of the former than the latter in recent years. You can read the whole thing here, but here are some highlights.

On Mike Gundy and Mason Rudolph

“Mike and I healed a lot of wounds last year. And I formed an unlikely friendship with Mason Rudolph. Aside from his parents, I truly believe I’m his number one fan. He and James Washington will be fun to watch in Pittsburgh over the years.”

“When the timing is right, I think serious consideration should be given to naming the village in honor of the one who made it happen. ‘The Mike Holder Athletic Village.’ He deserves it. Mike has dedicated his life to this school. Mike is like a son to me, and is one of the humblest people I know. He’d fight the naming honor to the end.”

On his own statue

“I’m honored that the university has commissioned a sculpture of me to stand at the entrance to the West End Zone at Boone Pickens Stadium. I’m hopeful it can be in place for next year’s football season. Hopefully, not long after that, I’ll be joined by Barry Sanders, who is so deserving of his own sculpture.”

There’s a lot going on here, and all of it is newsworthy. Heck, each of these quotes could be its own blog post. I suppose the most immediately intriguing thing is the statue. When word came out this summer that Barry was going to get his, it seemed inevitable that other prominent OSU figured would get the same. I think Pickens qualifies.

Many people won’t agree about Holder, but Pickens is right about him. He deserves for the athletic village to be named after him. Those two are on the short list for Mt. Rushmore candidates in Stillwater. Both are probably on it, but you might have to make it five faces along with John Smith, Mike Gundy and Coach Iba. Lifers, all.

Carson and I talked about this on the podcast today, but OSU would just not be anywhere within the realm of where it is without Pickens’ work. That’s something to be celebrated as his life winds down, and I hope he gets a number of special seasons to enjoy before it’s all over. Here’s to Boone, and here’s to another great fall in Stillwater, USA.