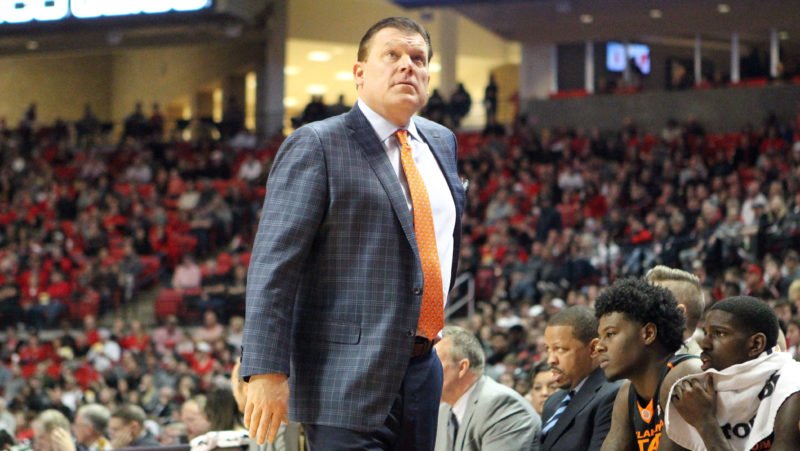 His first shot was against his former mentor Bob Huggins of West Virginia. The Cowboys would lose by 17 in their home opener. Underwood got five more tries at that feat including back-to-back Saturday road trips to the No. 2 team in the country in Baylor and Kansas. He even had a chance to do it against his alma mater on the 1,000th Cowboy game played in Gallagher-Iba Arena. But the Cowboys, again, came up short.

With a 83-64 win in Lubbock, the Cowboys have finally broken their seal on the Big 12 season. Underwood’s 100th career win in 122 games ties him with the 10th fastest college coach to reach that landmark.

After the win, Brad Underwood was asked what it meant to reach that milestone. He was quick to deflect the attention to his team.

“I think we have proven that we can be a very good basketball team,” said Underwood. “We’ve beaten UConn, we’ve beaten Georgetown and we went to Wichita State and won. Maybe to get this Big 12 stigma gone.”

Underwood went on about where he sees his young team at this point.

“I’m very positive,” continued Underwood, “and I’m happy for our guys because they didn’t let the six losses, leading in Allen Fieldhouse and getting beat at home in the last four minutes get to them. That’s a huge jump for us.”

Riding a historically long losing streak is a new thing for Underwood. Coming into Saturday’s game, Brad Underwood held a career .818 winning  percentage which was tied for seventh-best for a head coach in his fourth season.

At Stephen F. Austin, Underwood tied Brad Stevens with 89 wins, the most in a head coach’s first three seasons including a 53-1 in Southland Conference play. His Big 12 start resulted in six-straight losses.

Competition has obviously ramped up since joining the Big 12 resulting in that 0-6 start. His team is young and those six losses included close road losses to No. 3 Kansas and No. 6 Baylor the conference opener against No. 16 West Virginia.

Underwood shed a big, uncharacteristic grin as he enjoyed the win with his team in the visitor’s locker room. He will look to build on this victory as just another step in the process.

“I was very pleased with our energy,” said Underwood. “It is great to get that first one under our belt. We talked about how we can’t replay the first six games so that third’s over. Let’s start anew, and today was game one.”