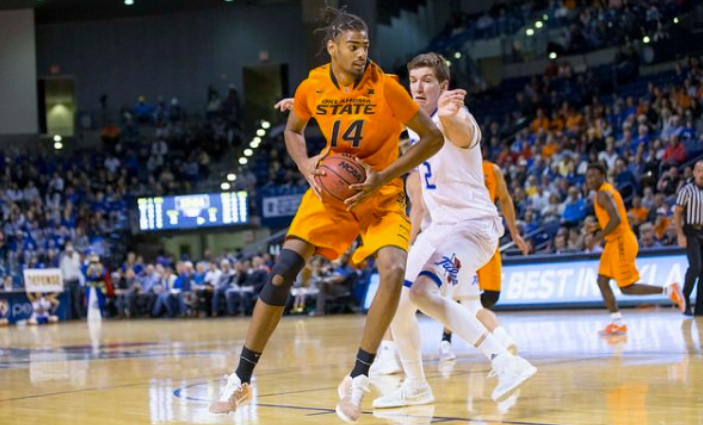 On Saturday, a shorthanded Oklahoma State team clinched the program’s first road win in seven tries thanks in large part to its most inexperienced players.

Without Jawun Evans (who sat with a shoulder injury), and with Phil Forte playing through a tailbone injury, Brad Underwood leaned hard on his freshmen. Specifically his point guard Brandon Averette.

“Well he (Averrette) played very passive the first five or six minutes,” said Underwood. “You could tell he was nervous. He needed a second wind but I don’t play Jawun 37 minutes. I played him 37 minutes.”

The first-year head coach was happy with the effort of all of his first-year players.

“I love this freshman group. They work their tail off and that is why I play them. They have great swagger, great confidence, and a lot of pride. All of the young men have won and they are winners and they know how to make great plays. You can talk about Lindy’s shot and right on down the line. ”

That freshman group accounted for 41 of the Cowboys’ 71 points and shot 42 percent from the field. Averette led the group with 17 points, three rebounds, three assists and three steals (and five turnovers).

Averette got some help off the bench from Thomas Dziagwa who chipped in 11 huge points. He had three big three-pointers in the second half and finished the night and the game by knocking down two clutch free throws after fellow freshman Lindy Waters hit the go-ahead step-back jumper with 15 seconds remaining.

Winning on the road as an inexperienced team is not something Underwood takes for granted.

“I found myself praying a lot. I told the team that I had seen a lot of veteran teams get punched in the mouth on the road and fold, then not win this game. I have been apart of it.”

With just three games remaining before Big 12 play (including a tough road trip to Wichita on December 17th) this experience (and the overall depth of the roster) should pay dividends when the Cowboys head into conference play starting on December 30th.