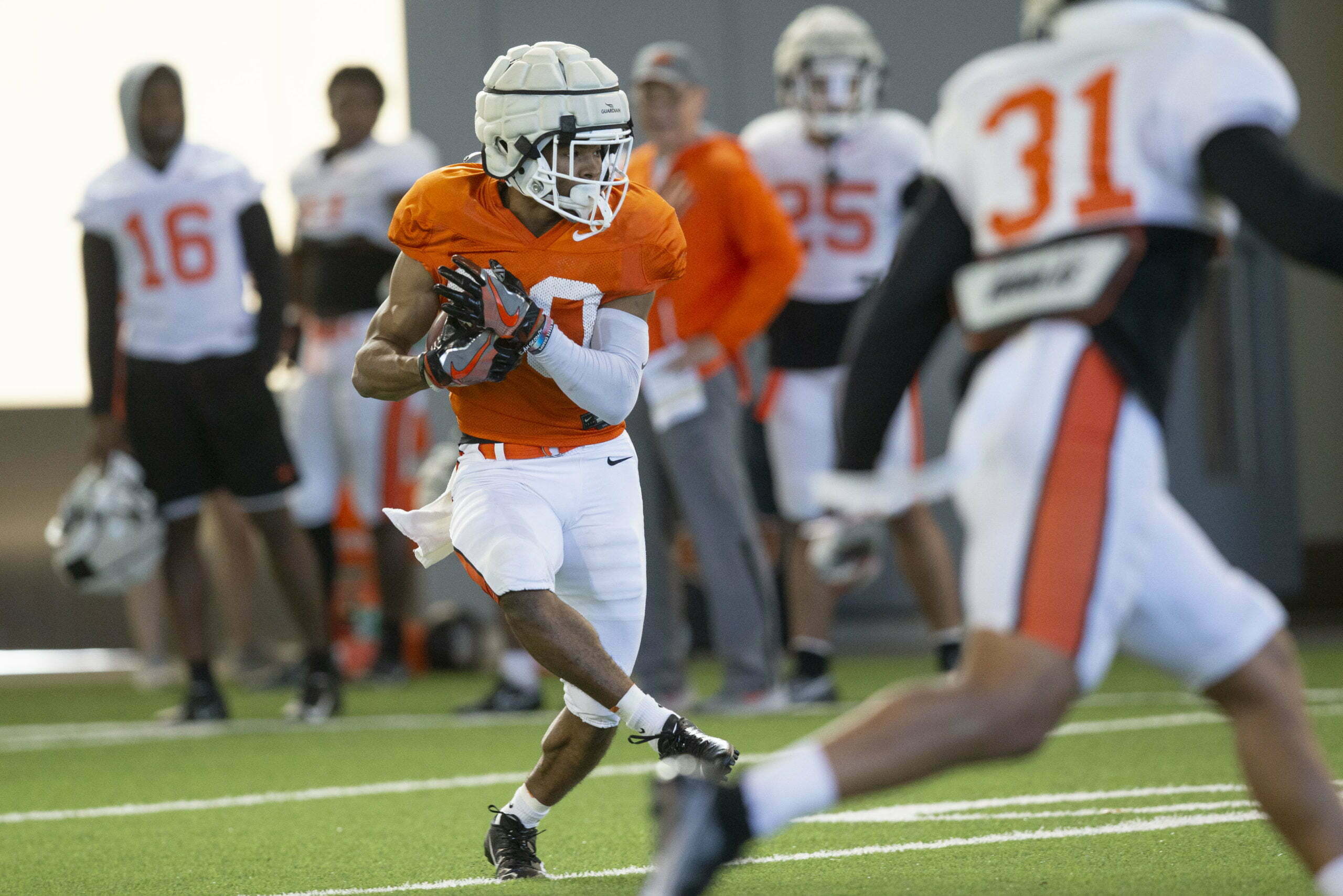 As has become status quo, the Cowboys have a lot of talent at receiver in 2021, but the Pokes lost a lot of experience.

With Tylan Wallace and Dillon Stoner prepping for Oklahoma State’s Pro Day on Thursday, Kasey Dunn’s wide receiver room isn’t as experienced as it has been in recent years. However, last week Dunn pointed to two guys who are stepping into positions of leadership: Braydon Johnson and Brennan Presley.

Johnson is the most experienced returner on the Cowboys’ roster, having caught 45 passes for 746 yards and five touchdowns across the past three seasons.

Presley, however, is just a entering his sophomore season after catching just seven passes in his freshman season (three of those did go for touchdowns, though).

“He’s a guy that everybody loves,” Dunn said. “The guy just outworks everyone and busts his a– every day. He turned in a hell of a game against Miami, which we all know, and we saw a glimpse of what he can be down the road. He’s just such a positive kid that everybody loves him. He easily steps into that (leadership) role. Now he just needs a little more production, a little more skins on the wall and everyone will buy into what he’s talking about.”

Gundy said Tuesday that Presley had to learn as he went last year with the truncated spring, summer and fall camps because of the pandemic. Presley got it going by the end of the year and capped his freshman season off with a Cheez-It Bowl where he caught six passes for 118 yards and three touchdowns.

Before that game, Presley had one catch for seven yards all season.

“He can do a lot of things, we know,” Gundy said. “You can pull out his high school tape, he can catch it, he can run it, he can throw it, do a lot of things. He’s got his speed down now. I think he was a 4.51 guy. We need to be able to bring him into the offense in different ways because he’s so versatile, and he’s a quick learner. But again, this is not an easy game to learn without quality reps and with him not being in that spring, took him until the middle of November to get going instead of maybe what could have been the middle of September.”

Gundy said Presley will be involved in the return game this season, and last week Dunn compared him to former OSU standout Josh Stewart. Stewart had 2,204 receiving yards in three seasons and scored twice on returns in 2013.

It’s a lot of high praise for a kid who barely cracked the top 1,000 in his class rankings. Now heading into his sophomore year, he won’t only play a role on the field for the Pokes, but he is also being looked at as a guy who can lead.

“It’s kind of weird because when you have people older than you and stuff like that or just as young as I am, sometimes you think you haven’t earned the right to be that leader or be that person,” Presley said. “It’s not really for me trying to lead other guys but just coming in every single day trying to attack the day and be that person. If it happens, it happens. If it doesn’t, it doesn’t. Don’t force anything.”