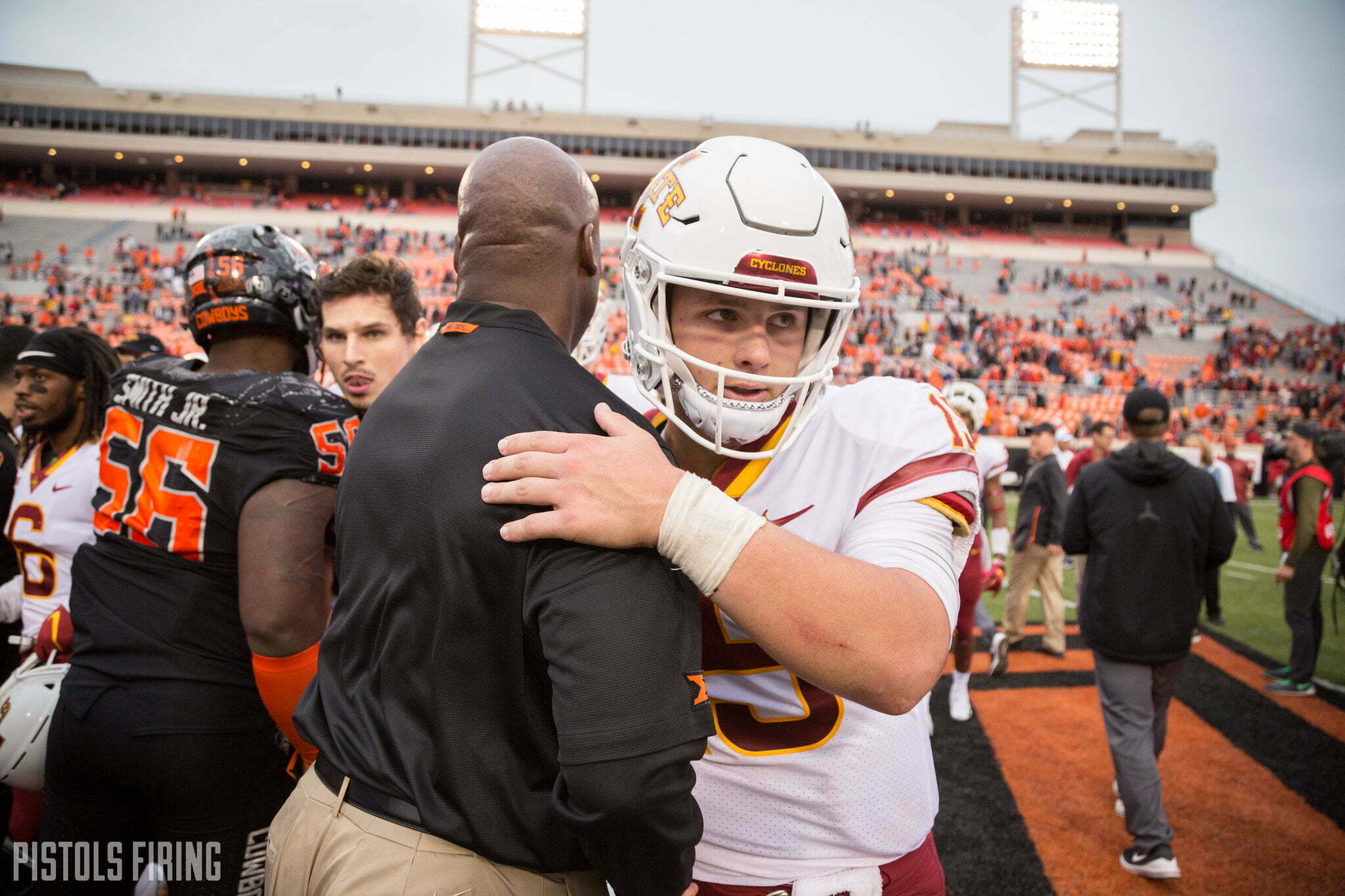 Halloween isn’t for another week, but OSU’s defense is in for a spooky trip to Ames on Saturday.

The Cowboys got torched by Charlie Brewer and Baylor’s offense, giving up 45 points in consecutive games and now head to Iowa State to take on an even more scary and explosive Cyclone offense captained by the Big 12’s leading passer, Brock Purdy.

Our weekly exercise of juxtaposing the numbers of Spencer Sanders and his next QB rival is becoming increasingly hard to look at, but let’s see how the two stack up.

The Cyclones are winners of three straight and in those wins have averaged over 40 points per game. Purdy has averaged 285 yards in those games and is fresh off of a 378-yard, three-TD performance in Lubbock.

Purdy is explosive, surprisingly mobile and he’s a gamer, but his most impressive quality might be his accuracy in the pocket.

As a true freshman last year, he finished behind only Kyler Murray and Will Grier in the conference in completion percentage (66.4 percent) *. His lowest mark in any game so far in 2019 was the 60-percent outing in Iowa State’s loss to Baylor. That and the West Virginia win (63.3 percent) are the only times he has completed less than 70 percent of his passes in seven games this year. For reference, Spencer Sanders has only hit the 70 percent mark once, his 79.2-percent debut at Oregon State.

“Personally, I think Brock Purdy is the best in the conference,” said OSU linebacker Amen Ogbongbemiga. “We have to find ways to stop him and get after him; that’s our best chance of winning.”

Purdy’s play, and the Cyclones’ win streak, has the sophomore even earning some national attention. ESPN’s latest Heisman Watch, included him at No. 7.

“He’s a savvy quarterback,” Mike Gundy said of Purdy on Monday. “He’s very good. I think he’s going to play in the NFL. He’s unusually mobile for his size. He’s strong for his size. He’s a good football player. He doesn’t make a lot of mistakes. They brought him out against us last year and he’s been in ever since and he’s played well.”

Purdy’s debut, as Gundy pointed out, came in the Cyclones’ 48-42 win over the Cowboys in Stillwater last season. That’s back-to-back games against QBs who debuted against Oklahoma State.

(Charlie Brewer debuted in BPS in 2017, Purdy did it in 2018. In the category of quirky, random facts that probably only I care about, both had technically debuted in earlier games but hadn’t attempted a pass before they faced the Cowboys. In their actual first college games, each registered one rush for -1 yard.)

Okay, enough of that.

I’m sure Jim Knowles is less concerned with any idiosyncratic statistical similarities between Brewer and Purdy, and more in avoiding similar on-field results. He’d probably just like to buck a disturbing trend of OSU getting lit up by any proficient passer it faces.

The Cowboys defense is allowing a passer rating of 146.0 through seven games, the worst mark in the Big 12 and on pace for the worst as OSU in at least 10 years. Only Texas has allowed more passing TDs (18) than OSU’s 15 and the Pokes are tied for last in the league only forcing three interceptions. If there is a silver lining to that ominous storm cloud, it’s that Iowa State is the team that they are tied with. Hopefully Sanders doesn’t help them out with that this weekend.

For the Cowboys (double-digit dogs on the road) to have any chance at limiting Purdy and the Cyclones’ offense, they’ll need to be sound defensively while creating pressure in the backfield. I know, that’s been easier said than done so far this year.

But they will also need some help from their own offense in the form of sustained drives and, more importantly, a halt to this season-long turnover fest. OSU has committed multiple turnovers in ever game since Week 2.

It’s hard enough to stop Purdy and his playmakers like Tarique Milton and Breece Hall without gifting them extra possessions.