Whoa, CBS has Oklahoma State as a No. 5 seed this week. That’s way too high. (CBS)

Bill Self doing his usual Bill Self “these guys are so good how do we beat them” thing: “I think Le’Bryan and Phil both, they could be the frontrunners for conference players of the year.” (NewsOK) 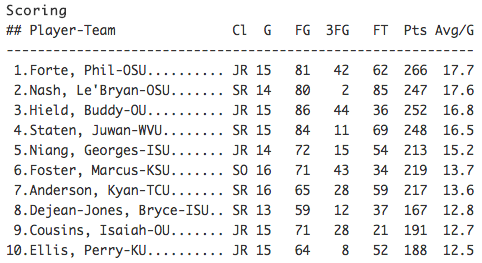 Ford: “Allen Fieldhouse is one of the special places in all of college basketball, and the support that Kansas basketball gets is unbelievable.

Interesting…Ford on running plays for guys not named “Forte” and “Nash”: “With that said, we’ve worked ever since Christmas, really, of trying to play off those two as well. They’re going to draw a lot of attention.” (Tulsa World)

Tyreek Hill will be arraigned on Tuesday in Payne County. (NewsOK)

Not sure what this means…

One last time in Stilly

I’m concerned about this Lincoln Riley hire. Mostly because he’s associated with Dana. I don’t want the words “Dana”, “offense” and “Norman” being used in the same sentence. (NewsOK)

So the coin flip photo was fake. (Yahoo)

Here are the connections OSU’s new coaches have to various folks already on the staff. (Tulsa World)

Here’s a look at how the Dallas Cowboys’ season ended. (PFB)

Good recap of the game from last night by my man Tom Fornelli here. (CBS)

This is great. Scott Van Pelt killed me.

Edgar Allen Poe started at the end. (99U)

Read this post: Counterintuitive though it may seem, sometimes the best way to minimize failure is to embrace it with open arms. (99U)

How to read Gawker in 2015. Interesting implications here for bloggers. (Gawker)

This on The Vanilla Trap is smart. (Acuff)

This probably isn’t what you think it is but it’s really good…Love didn’t happen to us. We’re in love because we each made the choice to be. (NYT)