Never forget. As always, this from Gottlieb is great as well.

Interesting stuff here from John Helsley on OSU’s desire to take 3s. Ford seems pretty okay with it and I’m not sure he’s wrong. 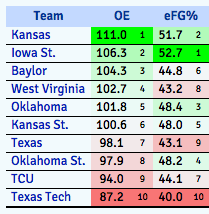 I agree with this: If the magic number for the NCAA Tournament is 9 then OSU should still get in. Heck, it might be 8. (Tulsa World)

Perhaps Kansas should take a page from Texas and Oklahoma, which have graciously allowed the Big 12 to crown four different champions in the last four seasons. (Fox SW)

So ESPN is trying to get college football to move its games off of New Year’s Eve. Over/under on this getting done by Mar. 1? (Sports Business Daily)

Why in the world would you want to subject yourself to being the CFP committee chairman? (Yahoo)

They say be careful of what you wish for, but Mason shows us that we should never stop wishing. (CRFF)

This on how many games a team should have won in a given season is really, really interesting. OSU underachieved in 2013! (Football Study Hall)

When he opened this place, he opened a dusty box full of his dreams, his accomplishments, his failures. He used it all as inspiration, as motivation for one last chance. Read this now. (O’Colly)

This is the most Berry Tramel post ever. He ran into Brian Montonati while seeing Foxcatcher last week. I miss that 2000 team — not just because of Desmond, either. (NewsOK)

Alex Dierenger got his second Big 12 Player of the Week award this week. (Big 12 Sports)

The Thunder could have had Klay Thompson…maybe. (Daily Thunder)

This is great — a ball boy ran on the court and fixed Rafa’s water bottle. (FTW)

How about how disinterested this announcer is about a John Wall between-the-legs pass here? (Big Lead)

OSU got a verbal from a former Texas recruit. ATH, 4-star, etc. (PFB)

OSU is fighting an uphill battle to land Warren, but don’t discount its chances to land Carson, who is a Georgia commitment. Carson is at Butler Community College in Kansas, and the Cowboys have done well there in the past. Plus, Carson is admittedly excited about the opportunity to get more touches immediately in Stillwater. (ESPN)

What to expect over the next week from various recruits OSU is trying to get at the very end. (Scout)

I saw Selma last night. It was immense — definitely recommend seeing it if you haven’t yet.

Rather than worrying about the size of an idea, which most people do, it’s more productive to think about the possible leverage an idea has. (99U)

What the sun would look like if it was replaced by other stars. (Kottke)

The secrets of street names and home values. (NYT)