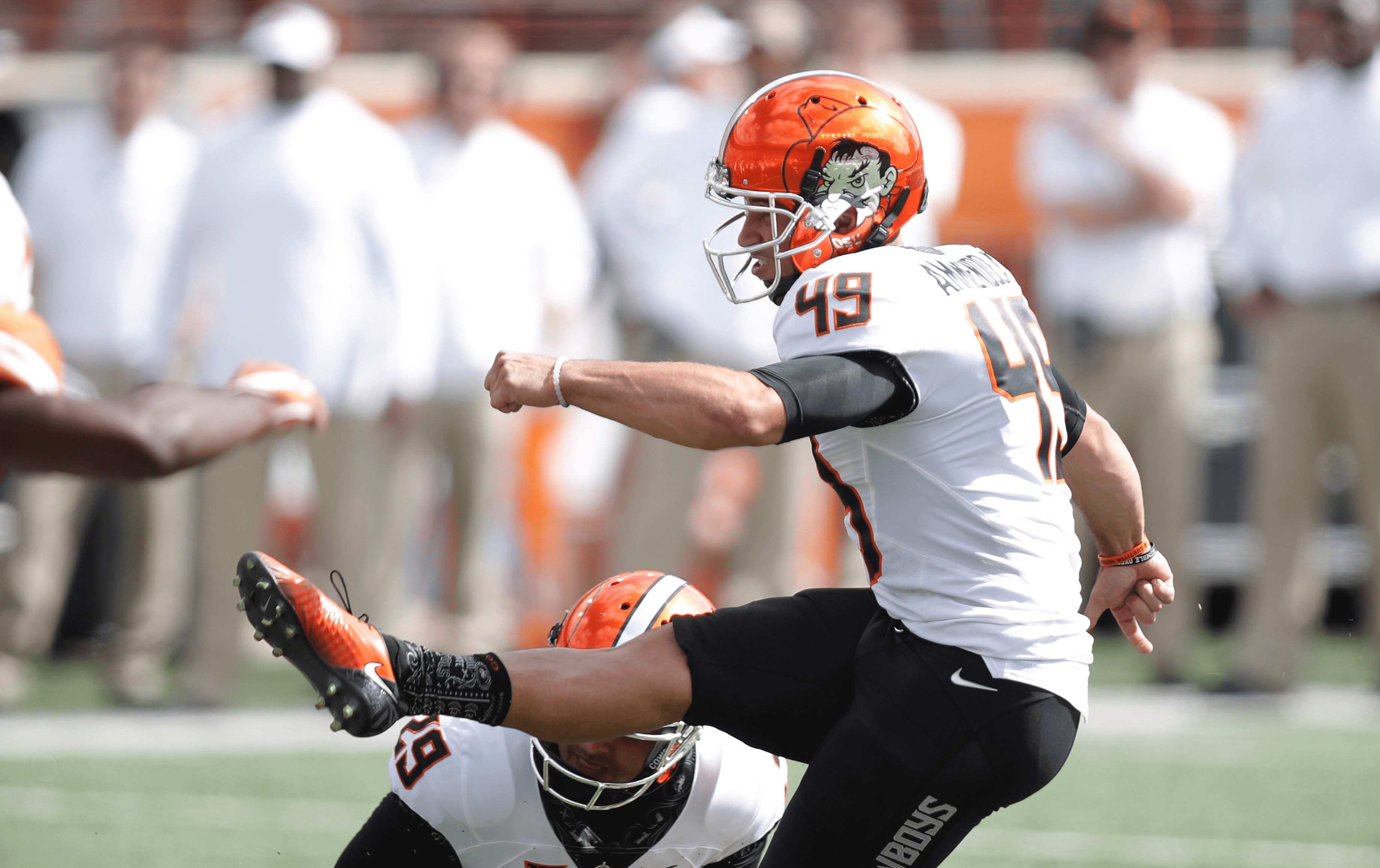 By the time Ramon Richards fell to the turf in Darrell K. Royal-Texas Memorial Stadium, I think almost all of us were exhausted.

The game was about as pretty as a my patchy neck beard and had fewer points than Oklahoma State put up in the first quarter alone against Southeastern Louisiana last season. So let’s examine what the heck happened here: 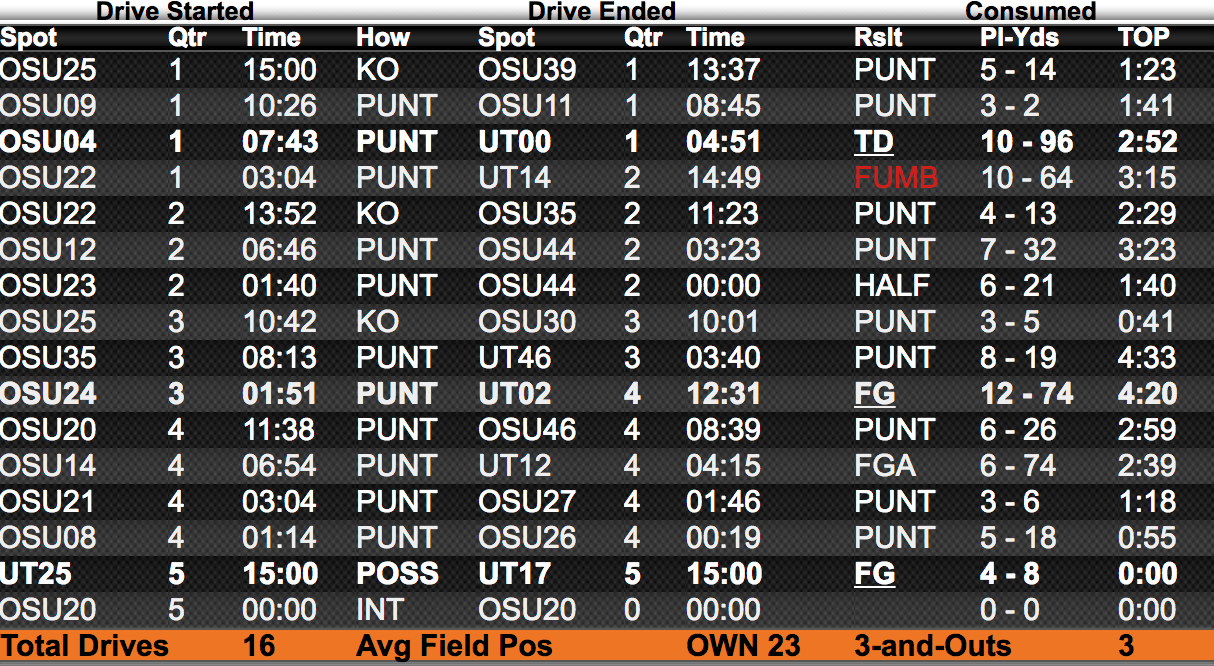 Almost none of this is good. The 96-yard touchdown drive is absolutely beautiful, but other than that, there isn’t a lot of positive to pull out of that chart. Scoring three points on seven second-half drives is about as woeful as even Tennessee could make it look against Alabama.

The Texas defense was good, quite good, but as the commentators so kindly reminded everyone throughout the game, OSU has the “No. 1 offense in the nation.”

Oklahoma State came into this game not having punted on consecutive possessions all year. It did so four times on Saturday. Zach Sinor had as many punts in this game (9) as he had all year. It was a good thing the Cowboy defense was outstanding.

Coach Mike Gundy is superb at killing off teams that struggle offensively. He said his defense’s performance was the best he can remember since he took over in 2005. It just happened that it was probably his offense’s worst since Mason Rudolph started starting.

So that made it close, but, like Gundy said, the defense was just outstanding. In fact, it has been against the Longhorns since 2008.

#okstate Crazy stat: In OSU-Texas games played in Austin, the Longhorns haven't converted on a TD pass since 2008. Since Colt McCoy's junior season. No TD passes now in five full games, plus two quarters in 2008. 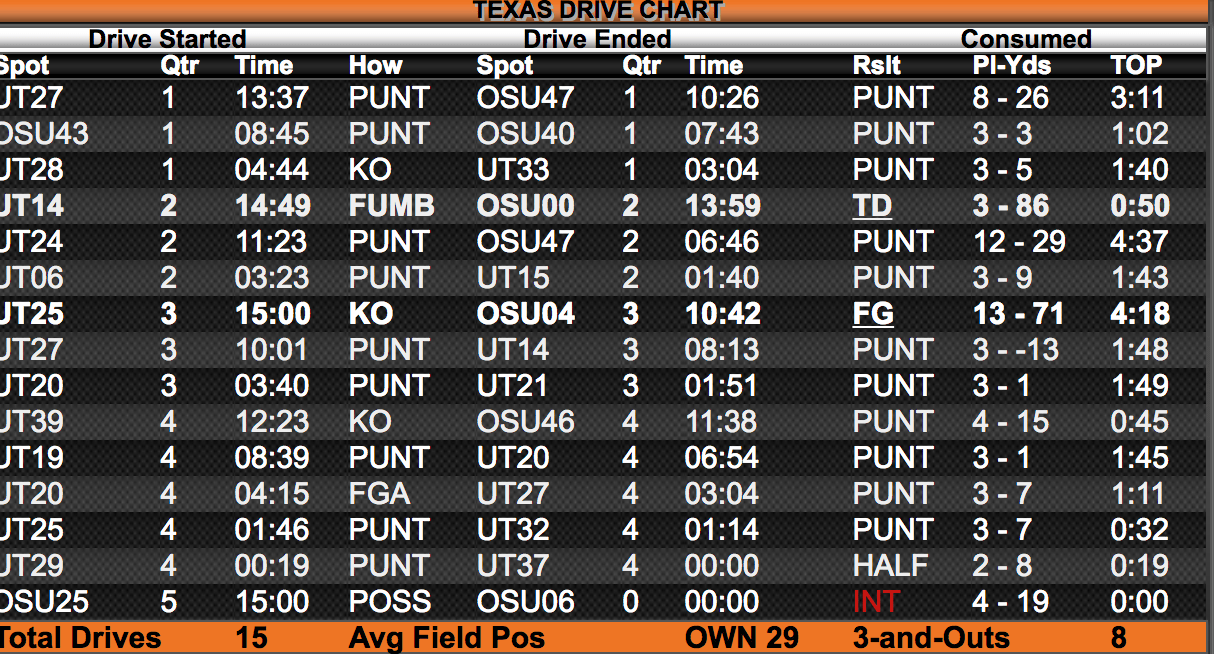 Gosh this game was so gross. Texas hasn’t gone punt-punt-punt to start a game since, well, last week against Oklahoma. No one anticipated them to put up any sort of impressive final score, but this was worse than at least I thought it would be.

Also, scoring three points on eight second-half drives against the top offense in college football, at home, after losing to OU the Saturday before is … bad.

As horrible as the UT offense was, there was one point late in the game when it was statistically better than what Rudolph was throwing out there.

You get the feeling that Sam Ehlinger, UT’s freshman quarterback, will be a stud someday. Gundy watched his final play interception and talked to him after the game.

“I did tell the quarterback after the game that I was essentially a little bit upset that the game ended that way,” Gundy said. “He’s a really good player, and I’ve been in that situation before, and I know that’s hard for him, to lose that way.

I guess so, but a few curse words and metaphorically paid-for drinks won’t cover up how atrocious the OSU offense was Saturday. Texas brought it to the Cowboys. UT was more aggressive and played better. The Pokes were lucky to escape with the win.