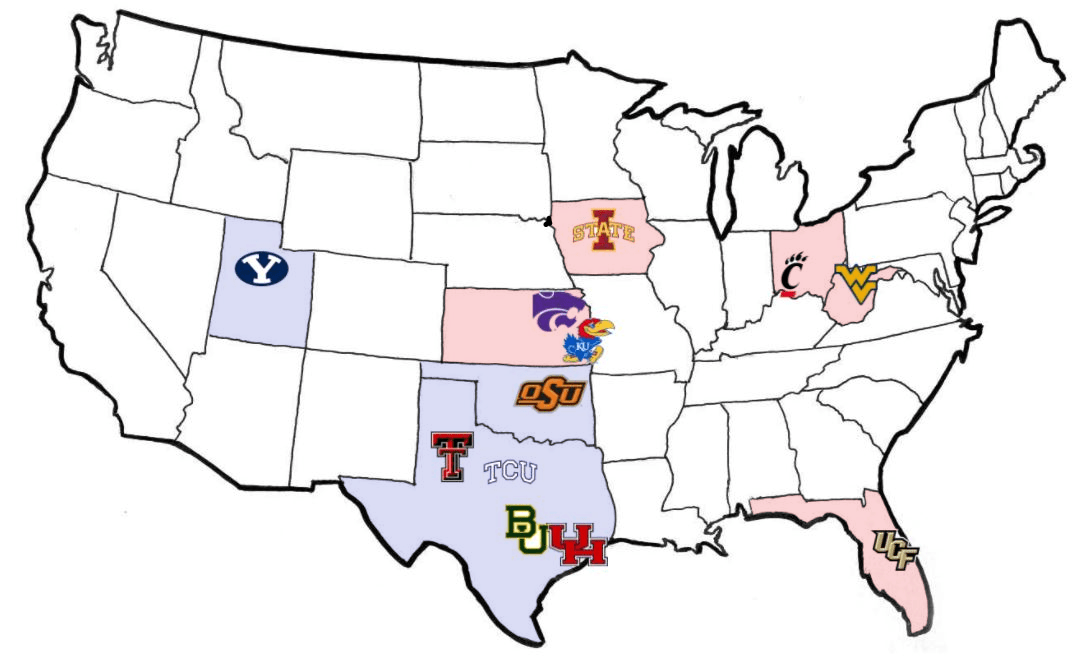 A uniquely fun part of the Big 12 was that every year, every team played each other in football.

With the league inviting BYU, Houston, Cincinnati and UCF on Friday, it would understandably be difficult to keep that tradition going with a 12-team league. BYU athletic director Tom Holmoe said Friday the league would have two divisions.

It’s not a foreign concept to the league, as when there were actually 12 teams in the conference, the league had North and South divisions. However, the conference was a lot more geographically synchronized back then. Coolly strolling down middle America saw Iowa State, Nebraska, Kansas, Kansas State, Missouri and Colorado in the league’s North division with Oklahoma State, Oklahoma, Baylor, Texas A&M, Texas and Texas Tech in the South.

The new league goes much farther east and west than it did before, so how would the new divisions shake out?

The first thing I thought of was East and West divisions. It helps the league stand out from its previous self, and I think it makes the most sense geographically.

This keeps teams in the same state together with the four Texas schools in the West and the two Kansas schools in the East. It also significantly cuts down West Virginia’s travel, something that has been a tough ordeal for the Mountaineers since joining the conference.

There were also some people wanting to restore the old divisions on social media, something that would look like this.

To me, this makes less sense geographically, as I don’t think West Virginia, nor UCF, should share a division with BYU across the country. Like the East/West divisions, though, it does keep KU and K-State together and all of the Texas schools together.

Mike Gundy noted this week that he wants to stay in a conference with Texas schools, as it helps his program (and OSU’s other athletic teams) in recruiting. It’s a wonder if other schools will push to play in Texas as much as possible, which could be a push against the four Texas teams sharing a division.

So perhaps splitting Texas would be an option with another look at West/East divisions. This look would, though, put three of the four newcoming institutions in one division, which also might come into question. It also gets a little awkward with Iowa State being as close as it is to the Kansas schools but being in different divisions.