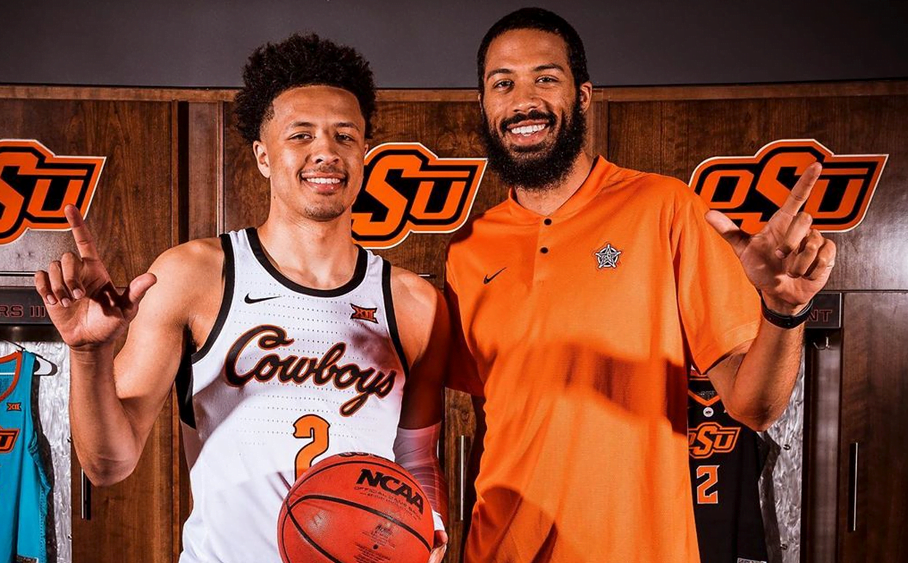 Cade Cunningham, the No. 2 prospect in the 2020 class, announced his intention to play at Oklahoma State on Twitter on Tuesday night, and the celebratory scream could be heard miles outside of Payne County and all over the internet.

When Mike Boynton got the notification on his phone he excused himself and trotted down a staircase or two to the floor of Gallagher-Iba Arena to let out a triumphant “YEAH!!!”.

That hilarious scene was quite obviously staged but don’t think for a minute that the exultation he mimicked didn’t mirror — or wasn’t exceeded by — what he felt when he actually got the news.

According to 247 Sports, Green was the No. 1 recruit in the 2005 class with a rating of 0.9998. Unfortunately, he never played at OSU after declaring for the NBA Draft straight out of high school and was drafted No. 18 overall by the Celtics.

We’ll see. Cade committed to OSU over a handful of bluebloods including the likes of Kentucky and North Carolina, which were in his Top 5. He would be the highest rated recruit to ever don the cursive Cowboys.

Nash was No. 8 player in the class and a McDonald’s All-American who won Big 12 Freshman of the Year and went on to be one of just five Cowboys to earn all-conference honors four times.

In Smart, OSU had back-to-back winners of Big 12 Freshman of the Year. Smart won several other conference honors like Player of the Year in 2013 and all-conference first team and all-defense both years and was the first Cowboy to ever earn All-American honors as a freshman.

He backflipped is way through the OSU record books before being taken No. 6 overall in the 2014 NBA Draft by the Celtics.

Off-the-court issues kept this five-star talent and the No. 5 power forward in the class from ever making his mark in Stillwater. Imagine how good that team could have been had Gerald Green played and Brumbaugh had stuck.

The lone five-star recruit from the 2005 class to stick, the OSU record books are filled with Eaton’s name after a productive four-year career in Stillwater.

The Edmond native was the Gatorade Player of the Year for Oklahoma in 2006 and went on to have enjoy four-year career at OSU and was one of the best sharpshooters to ever come through Stillwater.

Anderson would go down as one of the best to ever play at OSU and is a still fifth in career scoring in Cowboy history. He was a Wooden Award finalist, consensus Big 12 Player of the Year and first-round draft pick.

Cade’s OSU story is yet to be written, but it’s hard not to get excited about next season and the impact he can have on the program moving forward.

With the pledges of Cunningham and four-star guard Rondel Walker, Boynton’s 2020 class is projected as the highest pull in 13 years. A complete 2007 class, replete with James Anderson, Martavius Adams and five other signees ranked 17th in the nation. Cunningham and Walker project as the No. 20 class for 2020 — and it will just continue to grow.

Boynton has laid the foundation for an elite-level recruiting class in 2020 with just Cunningham and Walker committed. If another domino were to fall — like a commit from Oklahoma’s No. 1 player Bryce Thompson — we can start talking about an historic class for the school.

Oklahoma State has received just eight commitments from five-star recruits as ranked by 247 Sports, and only five ever played for OSU. Three were in that 2005 cycle, but only Eaton stuck. If Thompson follows Cade to Stillwater, we’d be talking about two of the only nine ⭐⭐⭐⭐⭐s ever to pledge to OSU playing on the same team.