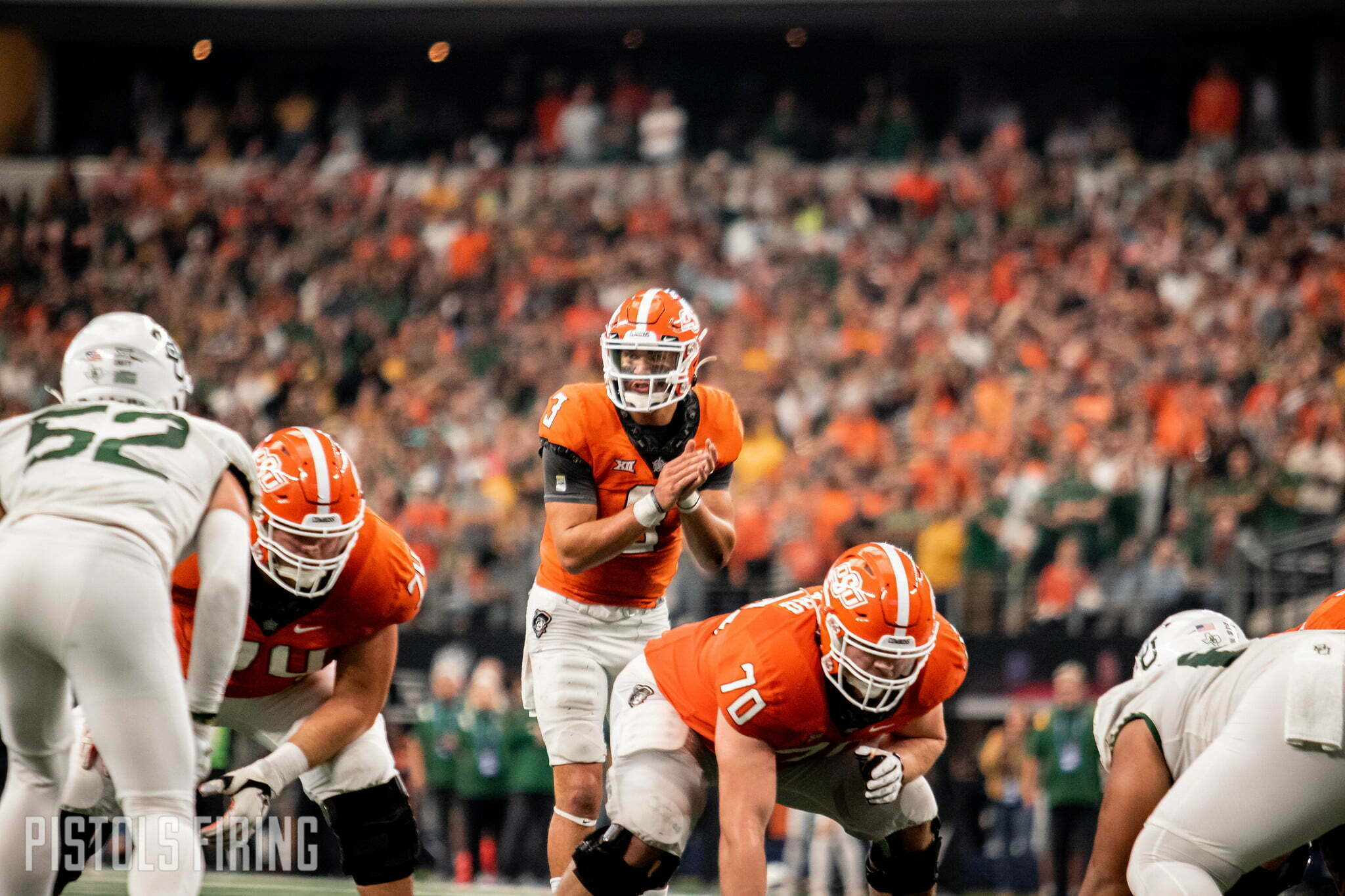 In two meetings with the Bears last season, Sander threw just one touchdown to seven interceptions. That’s ugly. In his other 11 games in 2021, that ratio ran at 19:5. His passer rating against Baylor in two games was 101.7 compared to the 140.1 he produced against everyone else.

So it would be easy to say that the Bears really have Sanders’ number. But despite all that ugly, he nearly had theirs.

Almost exactly a year prior to this upcoming tilt in Waco, OSU defeated Baylor 24-14 despite a three-interception game by Sanders.

The Cowboys ground out a win in the lower-scoring affair thanks to their patented defense and an ability to control the clock. A dominant OSU run game led by Jaylen Warren doubled the Bears’ rushing output. Sanders has 76 yards on the ground himself. He attempted just 23 pass attempts for 182 yards and a score.

With a shorthanded offensive line and sans Warren, the Cowboys were forced to attack through the air in the Big 12 Championship. OSU mustered just 66 yards on the ground in Jerry World compared to the 219 in the first meeting. Sanders found himself under duress and forced some throws that hadn’t for most of the season. The result was 46 pass attempts and four interceptions.

“I think it was four, I went back and looked at that, four of the seven [Spencer Sanders interceptions against Baylor], I think four of them he was being hit when he let go of the ball,” said Mike Gundy previewing the Cowboys’ trip to Waco.

“And then one he threw off his back foot on a crossing route, overthrew a guy and hit the safety in the stomach. So, we certainly want to be more protective with the ball against them. And I’m not really concerned about it based on the number of turnovers that he had. He was being hit when he threw the ball.”

But the Cowboys did nearly come back.

Despite the woeful stat line, Sanders captained OSU 89 yards down the field on a would-be game-winning drive. They came up short with 24 seconds left. If any one of a handful of those final plays goes differently, the storyline would have been how the “magician” pulled one over on the second-placed Bears.

Sanders earned the magician moniker from his head coach this offseason anyway, and through three games, has done nothing but live up to it. He’s thrown just one pick to 10 touchdowns and — while it’s only been against noncon opponents — is averaging the highest completion percentage of his career at over 65 percent.

Sophomore wide receiver John Paul Richardson has noticed an improvement from Sanders even from last season.

“Ever since the offseason he’s always focused,” said Richardson. “He’s locked in. You can just tell that it matters to him. Like everybody else, we want to win. I think that he’s done a really good job just taking the reins and his mentality fed off to everybody else. I”m definitely excited about where he’s grown and I’m sure he’ll continue to grow down the road.”

And so has Gundy.

“He’s playing pretty good,” said Gundy. “When we protect him a little bit and rush the ball some, he’s a pretty good football player. He’s got good skill. He understands what we’re trying to accomplish. We’ve talked about this a number of times, but he’s had a lot of experience now. Things come to him much easier than they did a couple of years ago.”

If the Cowboys’ offensive line, which is deeper and more healthy than it was for either meeting last season, can keep Sanders upright and give him a couple of extra seconds in the pocket, it might not take a magic trick to come home from Waco with a win.