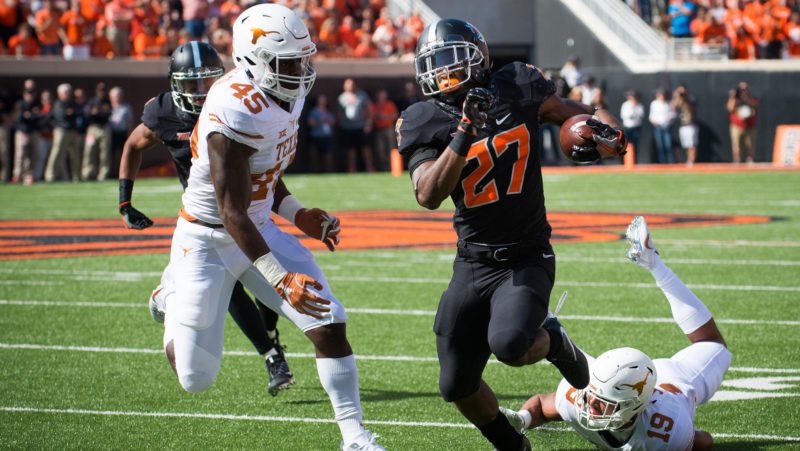 Justice Hill has accomplished a lot in his first year with the Cowboys. He’s set a new record for freshman rushing yards at 1,042 (and counting). He’s been the first 1,000-yard rusher at the school in four years (Randle in 2012) and just the eighth Big 12 freshman to reach the same mark.

He’s also won the Big 12 Offensive Player of the Year and AP Big 12 Newcomer of the Year, as well as being named to the All-Big 12 second team.

Congrats to our very own Justice Hill, the 2016 Big 12 Offensive Freshman of the Year! #okstate https://t.co/S15CrbLLOg

But could he lead all freshman rushers for 2016? It’s not out of the question.

Let’s look at the three freshmen ahead of him.

So Hill is only 30 yards shy of the leader, Mike Weber (who may play two more games) and 15 short of No. 3 who also has a bowl game coming. He should at least be in the top 3 since Damarea Crockett’s season is over.

So if Ohio State loses to Clemson or Weber doesn’t reach his projected production in the next two games, a big performance on the ground could push Hill into the lead.

Finishing top 3 is no small thing with the Cowboys’ struggles in the running game these last three years. Hill has been impressive and he gives us all a lot to look forward to in the future.