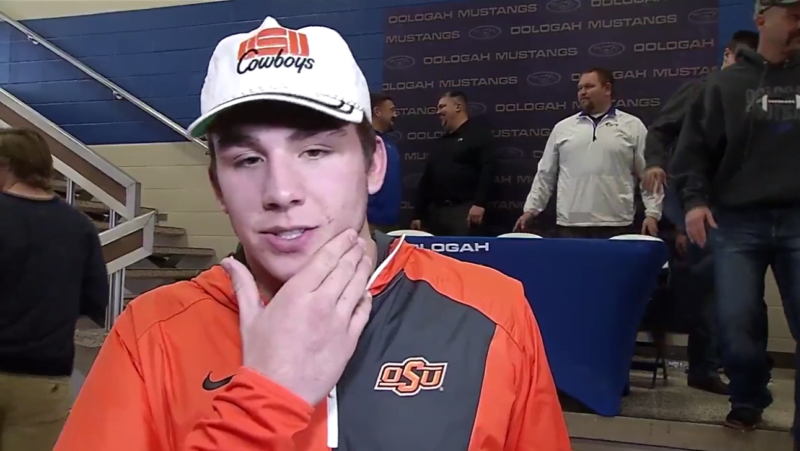 Yesterday, Brock Martin made it official — he will be an OSU Cowboy. The three-star defensive end from Oologah, Oklahoma signed his letter of intent making it official that he would spend his college days in Stillwater.

Apparently, pen to paper was just a formality for the longtime OSU fan.

“It feels good, you know. It’s a dream come true. I’ve always wanted to play there.

“I was an OSU fan because of my cousin and uncles. I don’t know. I guess it was kind of a rebel thing. You know, going against what they wanted me to do.”

Martin was asked about how he sees himself contributing as a true freshman.

“I talked to Coach Clements last night,” said Martin. “He was talking about possibly getting some playing time as a true freshman. I might play outside linebacker, d-end, hybrid position type. But that’s all we really talked about.”

His on-field production will work itself out but we really need to know where that amazing signing-day headgear came from. It was so good that it made into OSU’s official announcement.

Yeah, so I don't know anything about this kid, but he's my new favorite player pic.twitter.com/LOMZGNr9SR

The hat is fantastic but if you’re curious where it came from you need look no further than the soon-to-be freshman’s Twitter page.

The girlfriend is clutch ?? thank you babe? pic.twitter.com/RKXncH1PAJ