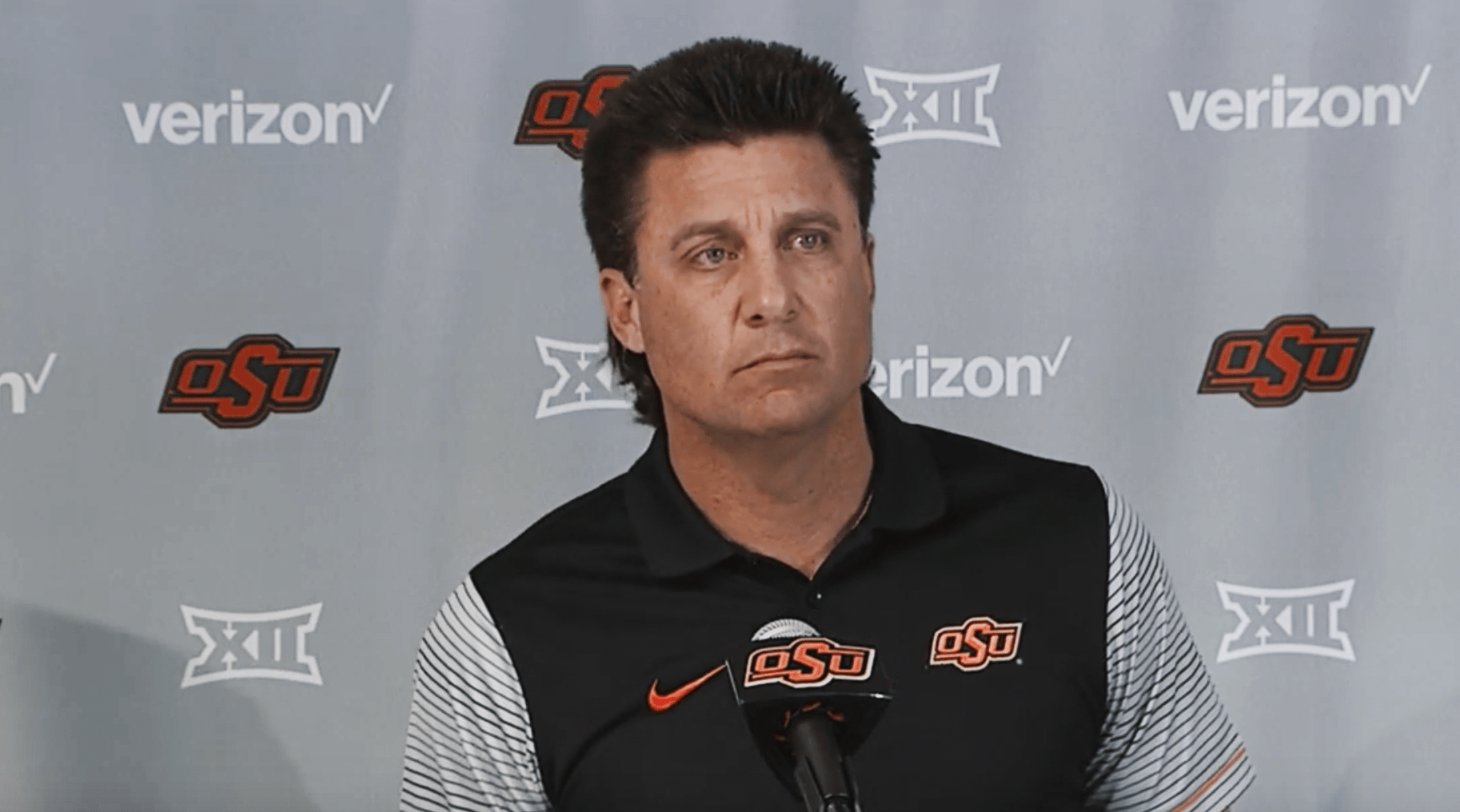 STILLWATER, Okla. — Over the past six years, Oklahoma State has had an average recruiting class rating of 30.3, according to Scout.com. In that time, the Cowboys have won 57 games in 78 tries.

That’s 11th in the nation. Better than USC, Notre Dame and Michigan.

“Either we are damn good evaluators, and the recruiting services don’t know what they’re talking about,” coach Mike Gundy said on Wednesday at his National Signing Day press conference. “Or we are damn good coaches.

“Sometimes when you’re in college and dating a girl and you’re all fired up about it and you sit there at the restaurant and she smacks or something or does something to irritate you and 15 minutes later you’re trying to find a way to get out of it and go home. In recruiting, every player we bring in deserves a coach who believes in them.”

This year’s recruiting class is No. 37, according to Scout.com. But that’s fine with Gundy. He started his National Signing Day news conference talking about his chase for the “cerebral” player, players with intelligence.

“In these last couple of years, we think that players that are able to think and react quickly — that are football savvy — they’ll be able to contribute better to our program.”

It doesn’t necessarily follow them into the classroom, he said. There are always a couple who aren’t in love with school but excel at football. Finding genuine, clean people is the key.

“Background checks and things like that are kind of the new fad, so we went into that, but that’s not fool-proof,” Gundy said.

The Cowboys signed four former wrestlers, one “heck of a shortstop,” and one who, in four years, “could be running in the Olympics.” Gundy said high school players should try to play as many sports as possible.

Multi-sporters and players who play both ways have infatuated Gundy athletically over the past couple of years, he said. Too often, players try to become specialized in one sport to become experts at it, he added.

“Justin Blackmon was a heck of a basketball player and Dez Bryant could do anything,” Gundy said. “Guys that are talented at other sports are usually more talented on the field than guys who don’t.”

Malcom Rodriguez and Tre Sterling might be this year’s model recruits.

Rodriguez was a state champion wrestler, three-time football state champ and a football player who “never came off the field,” safeties coach Dan Hammerschmidt said on the OSU athletics website.

“He’s a winner,” Gundy said. “When they showed me his tape and told me what came along with it, I couldn’t get the words out of my mouth fast enough, ‘You all had better go get him.’ It’s hard to find guys like that.”

The other half of the Gundy genome is his players have to, “get it.”

Gundy said the game has changed considerably, particularly in the Big 12. Intelligence is vital with the complex systems the players face, he said. Sterling ran for 2,085 yards with 32 touchdowns his senior year, made 60 tackles, forced five fumbles and caught four interceptions as a safety.

Gundy didn’t spew stats on him though. Instead, he went straight for his brain.

“His dad is a high school principal. He comes from very intelligent people. He’s very cerebral, very gifted, tough, durable, plays on both sides of the ball, very serious and no-nonsense.”

OSU has had its share of outstanding athletic talent. Like Gundy said, Bryant could do anything and Blackmon was an excellent two-sport player.

It seems with this class, at least, he has gone in a different direction.

“We were trying to grade them on being a cerebral player and not just someone who is athletic that has potential.”