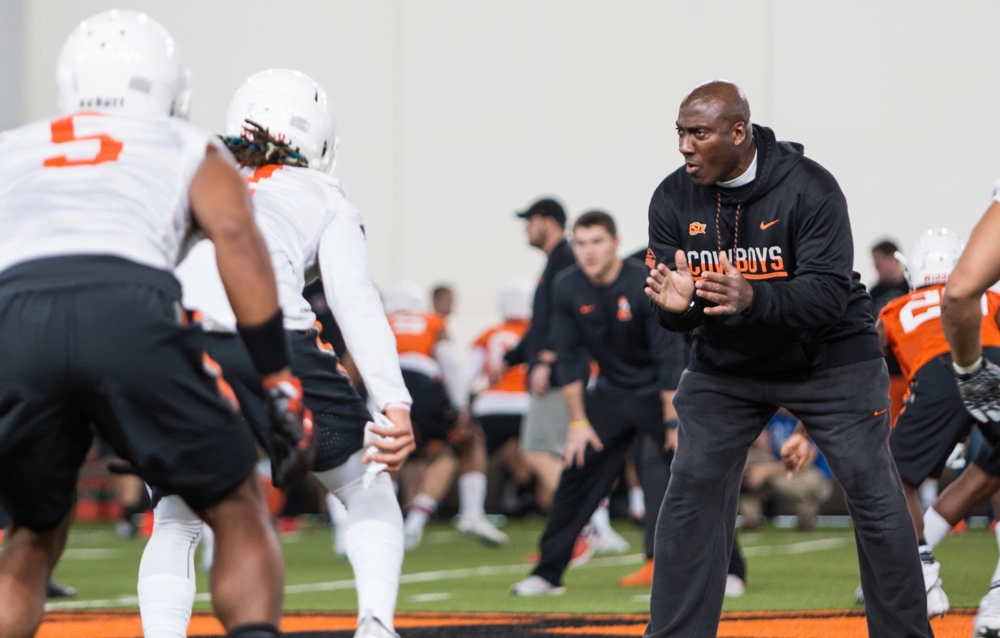 In Oklahoma State’s spring football press conference, OSU head coach Mike Gundy said that the Cowboys will have more varied looks on defense in the future, and that includes using more three-down lineman fronts in 2017.

The Cowboys used the formation a number of times last season. The 3-3-5 defense has a number of variations, but the Cowboys mostly used it last year in passing situations.

The 3-3-5 in its original state (six in the box, secondary pressed at the line of scrimmage) often employs the “disciplined aggression” philosophy, relying on zone blitzes and pressure to stop opposing offenses. Additionally, it creates an unusual front for the offense to block against, which can aid the defense in the running game. When the Cowboys used the 3-3-5 last year, though, they used it in a more simplified state. They used a 3-3-5 “across”, which means that all five players in the secondary align roughly 7-10 yards behind the line of scrimmage.

This is a conservative defensive alignment used to stop the deep ball and force everything underneath. Here’s a graphic from a Chalk Talk article on last year’s Texas Tech game:

The defense occasionally struggled in this personnel, as they gave up easy throws that often went for big yardage thanks to yards after the catch. The 3-3-5 is most effective as an aggressive scheme, and the Cowboys used it more conservatively with mixed results.

The tough thing about the 3-3-5, and with any pressure-heavy defense in modern football, is that it goes against offenses that operate with a much higher tempo than when the defense became popular in the early 2000s.

At that time, a defense could call different exotic blitzes with no worry about having to call plays on the fly. Now, if a defense calls a blitz and the quarterback throws for a first down, the defense has to call another play on the fly with the knowledge that using the same blitz call twice in a row is a major risk.

This isn’t to say that the defense can’t succeed in modern football. There are plenty of teams who successfully use exotic defenses, such as Arizona and West Virginia. The issue is that the defense takes time to learn, and no team is going to have success if they don’t have the ability to analyze and learn the defense extensively.

This is where the hiring of defensive analyst Brian VanGorder comes in. VanGorder has extensive experience with three-down hybrid defenses, tracing all the way back to his job coaching linebackers at Grand Valley State in 1989 under current Notre Dame head coach Brian Kelly.

Gundy believes that VanGorder can help the Cowboys incorporate the three-down philosophy into their defense.

“I think college quarterbacks have become coaches on the field,” Gundy said earlier this week. “If you don’t give them a different look sometimes and use some variation in your defense, they’re pretty good at picking you apart. We think there are times for three-down and times for four-down … and that’s why I wanted to bring a guy in to help us with how much you need to work on each area.”

The Cowboys aren’t going to completely overhaul their defensive system, but they are going to venture into becoming a more varied defense. The hope is that they will have enough time and knowledge to be able to use three-down sets more effectively than they did last year.

There were times where it worked well and there were other times when it did not. But with an offseason in front of them, and plenty of bright defensive minds on staff, they have plenty of time to turn it into an asset.