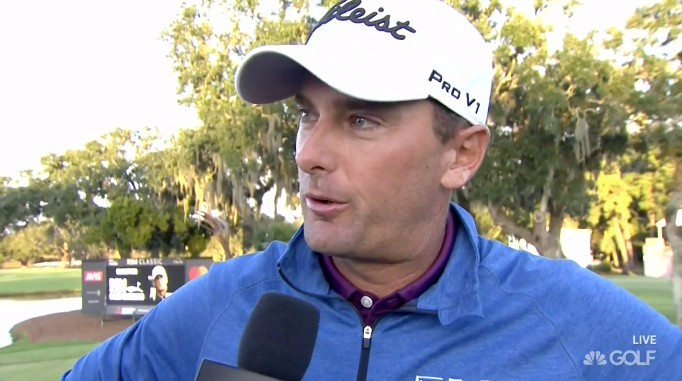 Charles Howell III won the 2018 RSM Classic on Sunday on the second playoff hole against Patrick Rodgers for the third victory of his career and first of the 2018-19 season. Howell, who birdied three of his last four holes in regulation to climb to 19 under and into the playoff with Rodgers (who shot 62 on Sunday!), missed putts on the 72nd hole and first playoff hole that would have won him the trophy.

Then he buried his third opportunity and snagged an invite to both the 2019 Tournament of Champions in Hawaii and, much more importantly, the 2019 Masters.

Charles Howell III gets the job done on the 2nd playoff hole at @TheRSMClassic for his third PGA Tour victory and first win in 11 years.pic.twitter.com/F55zuG2mfT

Howell led from wire to wire this week after opening 64-64 on Thursday and Friday. He held off Webb Simpson and Cam Champ and narrowly squeaked past Rodgers in the playoff. And he did it all by opening bogey-double bogey in his first two holes on Sunday before recovering to shoot a 3-under 67 to hit the playoff number on the nose. He hit an absurd 64/72 greens in regulation and took advantage of enough of them for win No. 3 of his underrated career.

The win for Howell was his first since 2007, and he was understandably emotional afterwards. Hell, the whole thing made me emotional, and I’m nothing more than a blog boy with a keyboard.

“I don’t even know,” said Howell. “I just haven’t been able to pull it off for so long … to hang in there and turn it around the way guys were playing around me … I needed some good fortune on my side and fortunately had it.”

Howell is being humble when he says that. He missed winning on the 72nd and 73rd hole on difficult putts by about one combined inch. He should have won the Quicken Loans National in 2017 when Kyle Stanley clipped him in a playoff. And he has been arguably the most consistent golfer on the PGA Tour for the last two decades.

The first of what felt like many came in 2002 at the Michelob Championship at that event’s last edition. Five years later he beat Phil Mickelson in a playoff at the Nissan Open at Riviera. Now, 11 years after that, a win at Sea Island to cap the 2018 golf calendar year. Four times he’s lost in playoffs.

“I think the best thing about my career has been my consistency,” Howell told Golf Digest recently. “I’ve only had one real lull and that was after I won in Los Angeles in 2007. I kind of had a mental letdown after that. The next year Heather [his wife] kind of gave me a talking-to. She said, ‘If you’re going to do this,’ then go do it — but do it all out.’

Sean Martin summed this up well in his third round preview for Sunday’s finale when he wrote the following.

There are few players who can match Howell’s enthusiasm for the game, though. He is enthralled with the unceasing quest for improvement that his profession requires. For Howell, Sunday isn’t just an opportunity to win. It’s a chance to assess how his game withstands the pressure.

“I’m most excited to see how I handle tomorrow because I have no idea what’s going to happen,” Howell said. “Nobody does.” This is the sixth time he’s held a 54-hole lead. He has never turned one into a victory. He has the chance to change that.

“It’s the same reason Bernhard Langer’s playing. The carrot is always dangled out there in this game,” he said. “In golf, it’s always out there. You know you’re just one day away.” [PGA Tour]

I don’t know how to frame this without appearing to be a cheerleader, but Howell is among the handful of best people I’ve met in sports. He’s kind when he doesn’t have anything to gain, selfless with his time and will talk to pretty much anybody he meets about any topic. He is as genuine and generous a human being as you will meet. Not in sports. Just in life.

Sunday may not have resonated in the larger golf world, but dang if it wasn’t a celebration in the PFB shed as Howell’s young kids joined him on the green as the final putt fell on his third playing of the 18th hole on Sunday.

“Probably relieved,” Howell said when asked what his family was thinking as they watched. “To be honest I didn’t want to hear about it from my son. My kids are now to the age where they’re into it … they get what’s going on. They get that I’ve failed a lot of times. Fortunately it was different today.”

They get that I’ve failed a lot of times. Maybe nobody has experienced a greater disparity between consistent success and “failure” than Howell. This time last year he had earned more money per win than anyone else in PGA Tour history, and it wasn’t close. What that means is that he’s succeeding by every metric — health, top 10s, made cuts, etc. — except for one. And it was that one that he put in the ground at Sea Island on Sunday evening as the sun set on the PGA Tour for 2018.

The next time we see him he’ll be teeing it up with Rory McIlroy and Dustin Johnson in Maui. And he’ll have an answer for the question he told Golf Digest is a persistent one from his kids.

“All they ask me at this point is, ‘Daddy, why aren’t you playing in the Masters,”

I am, he’ll say. And next year anyway, he will.