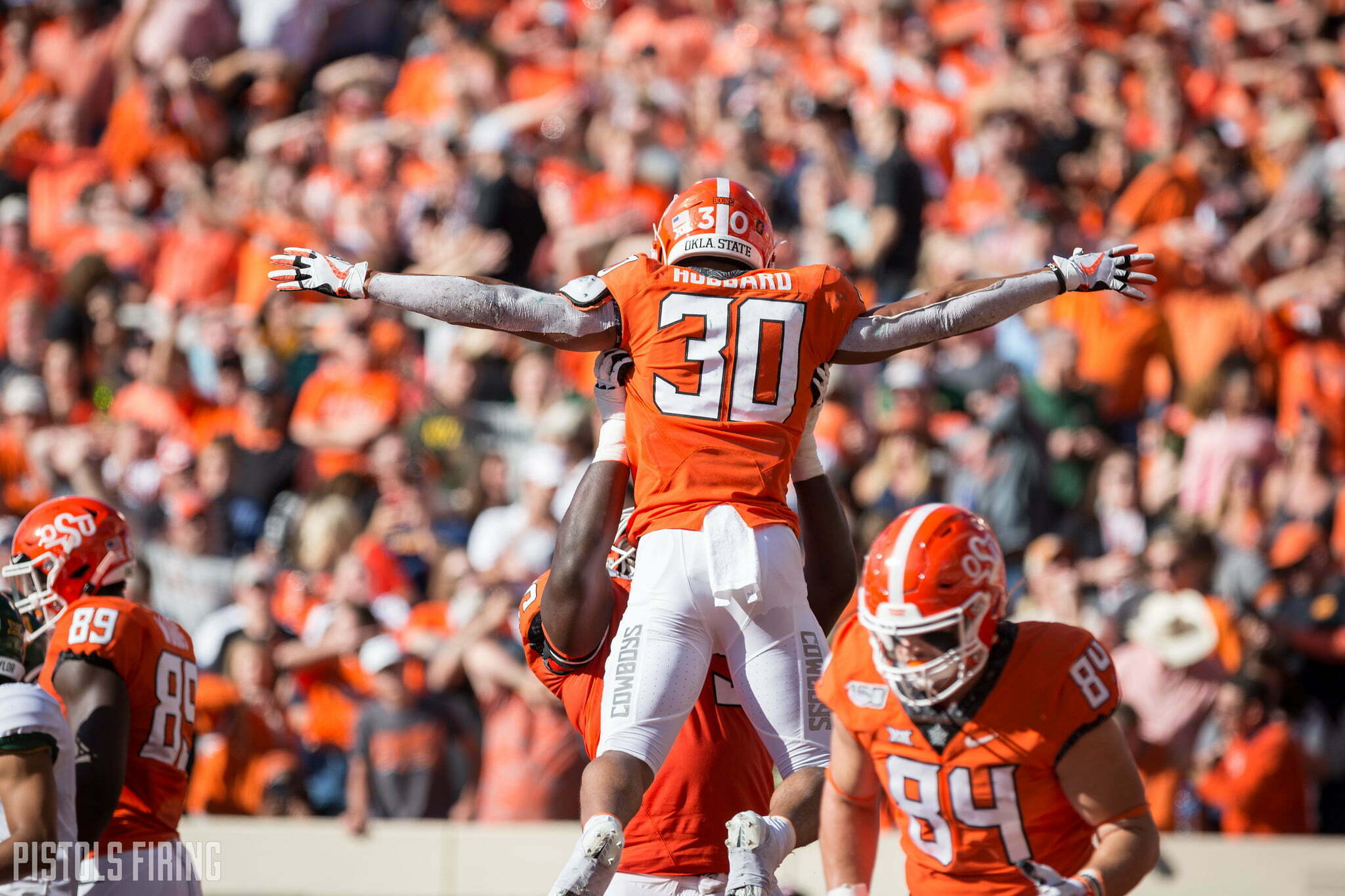 My first memory of Chuba Hubbard is a memory of Mike Gundy.

That now-famous clip from Chuba’s freshman year in which Gundy whipped his constituents into a frenzy with a single sentence.

We didn’t see him for another year. We didn’t see him take the full-time starting role for another year after that. Now we’re here, with 30 on the precipice of one of the 10 most productive rushing seasons in college football history. Almost certain to stand alone with Barry Sanders as the only two Pokes with 2K in a single year (Chuba is just 168 away).

When my buddy John texted me during the Liberty Bowl last year that Chuba was, like, a lot better than Justice, I raised an eyebrow. When Reggie Bush said Justice told him the same thing before the Oregon State opener, I raised the other.

Now, is there even a debate?

Dating back to last year’s Bedlam, Chuba has 13 games over 100 yards rushing (out of 15). One was a McNeese game in which I’m pretty sure but not positive he even played. He has four 200-yard games and was one run from a 300-yard game against Kansas State.

There aren’t enough superlatives in existence to contextualize how good Chuba has been both nationally and historically this season. That the record books read “Barry, Chuba” in so many categories is all the evidence you need of his greatness.

It’s not just the numbers either. To watch Chuba run is to watch a wall of water fall over a cliff and into the abyss. Things progress slowly and smoothly and then the water is gone in an instant, and you’re never going to see it again. It’s not an explosion as much as it is a complete evisceration. A disappearing act, even though you understand in the moment that you’ll never be able to forget what you just saw.

And while I think OSU fans have appreciated him inasmuch as you can appreciate a one-year starter, he has a chance in Bedlam to become one of the most beloved figures in OSU history.

Because for as much as we’ve talked about turnovers and deep balls and any number of in-game facets, this Bedlam is about one thing that involves two people, both Heisman contenders.

When things get dicey in games like this, you always turn to whoever has engendered the most trust. Those two might carry it a combined 65 times on Saturday given that OSU is playing QB2 and Hurts has a pick-six in each of his last two games.

I hope Chuba gets to end the fight, too. He’s tossed a suddenly-stalled OSU offense on his back for most of the season and simply said, “I’m enough.”

And he has been.

But it’s one thing to carry OSU to wins over TCU and Kansas late in the season. It’s quite another to carry 60K to an eighth home Bedlam win in the last 120 years and put a bullet in OU’s title hopes once and for all. TCU and Kansas are nice. Taking Bedlam in the game in which you hit 2K is the stuff we talk about for the next two decades.

So here it is. The last time we’ll see him (don’t kid yourself) and his chance to slay the dragon and wrap up a trip to the Heisman ceremony.

It’s easy to envision, isn’t it? OSU down 33-27 with three minutes left and Chu lined up next to Dru near the west end zone.

And there’s Chuba, tape running down his arms and up his ankles, his eyes half on the jumbotron and half on the ball. His heart thumping, knowing that for 11 games, he’s dragged OSU to so many wins but that for three minutes, he’ll face his toughest task. Because in that moment, Dillon Stoner and Landon Wolf are supporting actors. Chuba is the show.

There’s Chuba. There he is. And there’s a hole. It’s small, but he’ll find it. You think you have him, but you have him not. There’s Chuba, bent at the waist, not from the weight of it all but because that’s the position predators operate from. There’s Chuba, and then he’s not there anymore. We all know where he went. Something split and it’s 34-33. There was Chuba. He was as good as it gets.

Only for a while though. Then he was gone.