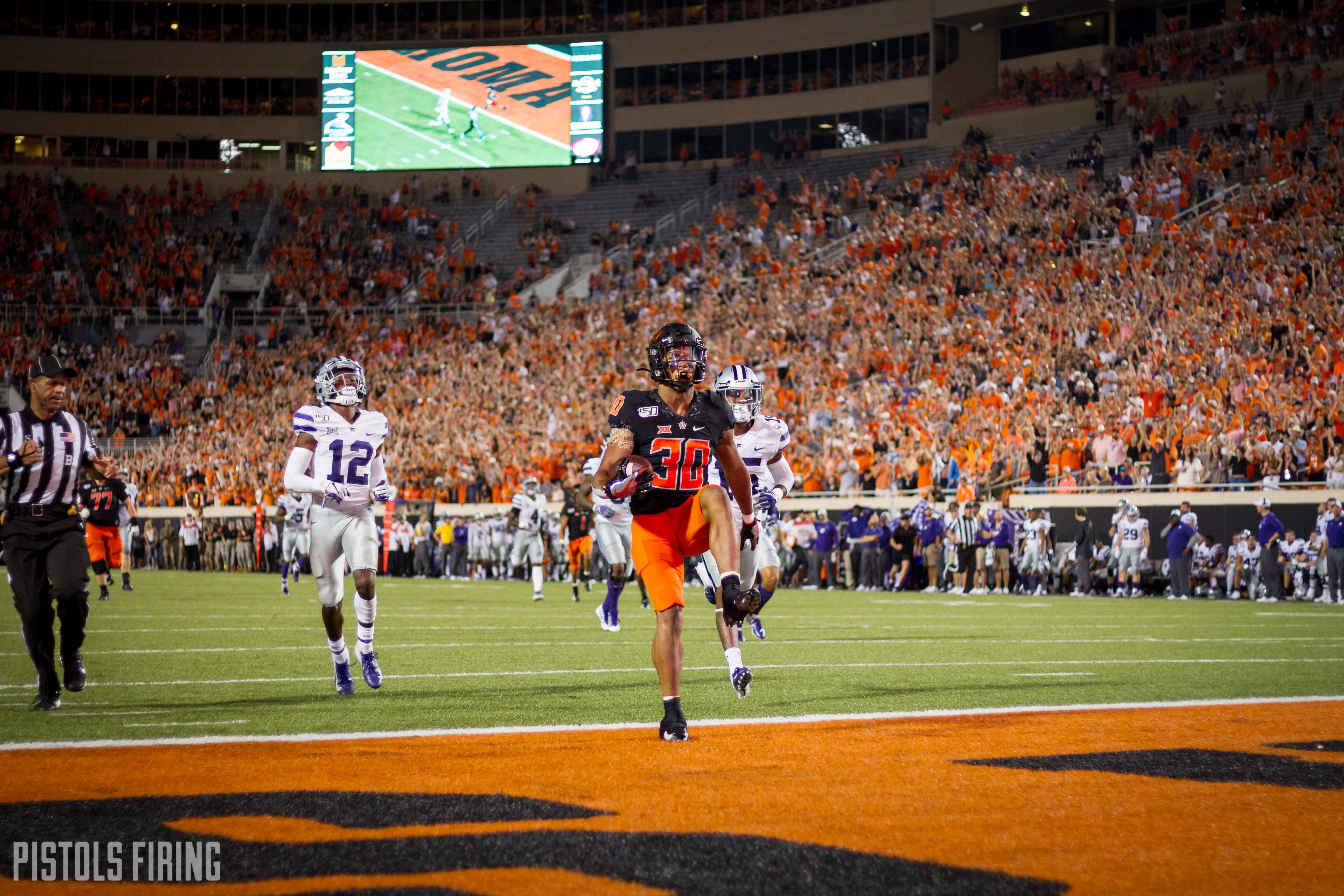 It’s not even October and Chuba Hubbard already has a healthy lead on his rushing total from a season ago.

In Oklahoma State’s 26-13 win against Kansas State on Saturday in Boone Pickens Stadium, Hubbard ran for 296 yards. That brings his season total to a NCAA-best 938 yards. As a redshirt freshman, Hubbard had 740.

“Anyone watching the game, obviously you’ll see the O-line did a great job,” Hubbard said after the game. “The coaches were doing the right things, making the right calls. Anyone could’ve been in there and did what I did. I’m thankful to be in the position I’m in, and I’m happy about the win.”

After toting the rock 37 times against Texas last weekend, Hubbard didn’t have a carry until the second-to-last play on the Cowboys’ third drive against K-State. That drive ended with 6:12 left in the first quarter, meaning Hubbard didn’t get the ball for about the first eight minutes of the game.

When he did get it, though, Hubbard gave plenty of reason to keep handing it to him. Hubbard had rushes of 84 yards, 53 yards, 44 yards and a 20-yard rush that almost seems too small to put on this list.

The biggest of those runs was the OSU offense’s first play after halftime. A thrown-together offensive line that was missing both of its starting tackles provided a hole that allowed Hubbard to go 84 yards untouched. Only 13 seconds ticked off the clock.

OSU coach Mike Gundy said earlier in the season that he’d like to keep Hubbard somewhere near 25 carries a game. Hubbard hit that mark precisely Saturday and did so at 11.8 yards a pop.

There have been 10 200-yard rushing performances from Cowboys in the Gundy era, and Hubbard has three of those this year. Here is the list of all of those sorted by date:

Notice only one other game came since 2000.

“I worked hard all my life to put myself into a good position to help my family,” Hubbard said. “Everyone around me, Spencer (Sanders), Tylan (Wallace), (Dillon) Stoner, our O-line, they’re all special guys. I’m blessed to be in this position I’m in. Anyone could be here. God led me to this destination. I’m forever thankful.”

Unless Pac-12 After Dark hits new highs in craziness, Hubbard will wake up Sunday morning the nation’s leading rusher, a title he’s had for a few weeks now.

It’s only been five games, but Hubbard’s 187.6 yards a game would put him second in school history on OSU’s single-season list. That only trails Barry Sanders’ Heisman-winning season of 237.5 yards a game.

He’s also on track to become the second Cowboy to surpass 2,000 rushing yards in a season, again only behind Sanders’ 1988 year. If Hubbard kept this pace, he would run for about 2,439 yards in a 13-game season. Again, it’s way too early, but that number would be the fourth most in a season in NCAA history.

There is a stat Hubbard did get the best of Sanders on with his performance Saturday. Hubbard’s 296 yards against No. 24 K-State were the most of any OSU runner against a ranked team. The best Sanders did was 222 against Wyoming in 1988.

“I wouldn’t say I’m even close to Barry or anything like that,” Hubbard said. “People kinda go a little over the top with that, but I just try to give my best every single day.”