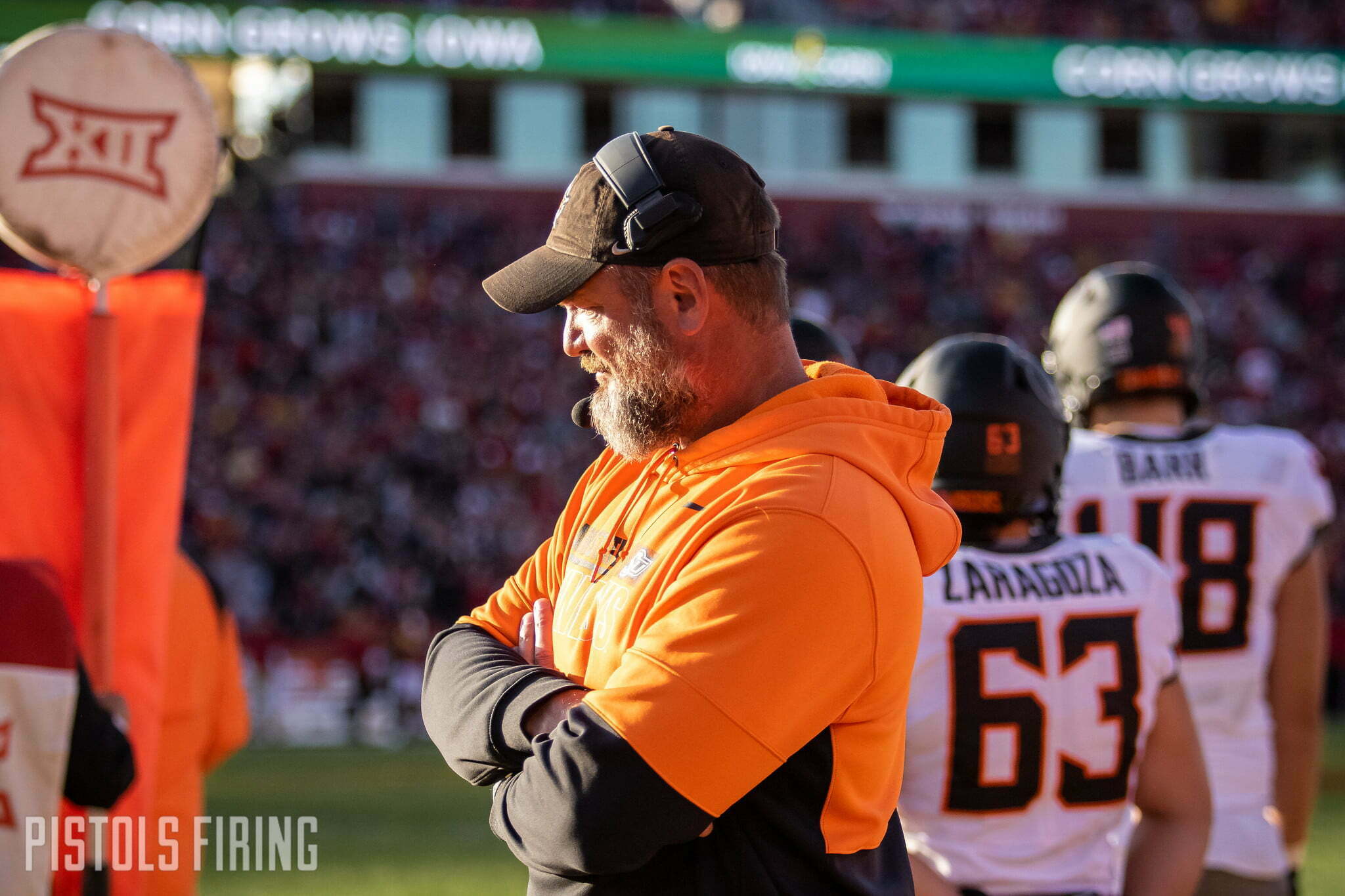 SCOTTSDALE, Arizona — Mike Gundy will use a trio of defensive playcallers in the Fiesta Bowl following Jim Knowles departure to Columbus.

“We’ll do it on 1st-and-10 and then third downs, passing situations,” Gundy said. “After watching it for the last three weeks, we’ve had a number of guys in the room that I was comfortable with. So we’re going to use a couple of guys at different times in the game based on the situations.”

The change was forced after Knowles, a finalist for the Broyles Award given to the best assistant coach in college football, left the program after the Big 12 Championship for the same title at Ohio State.

Duffie and Clements are the longest tenured defensive assistants on Gundy’s staff, joining the program ahead of the 2013 season. Hammerschmidt joined the program in 2015.

Clements, who spoke with the media this week when the Cowboys were required to have a defensive coach speak, joined the college coaching ranks in 1999 with his alma mater, Kansas State. He was a student assistant with the Wildcats for two seasons before being a graduate assistant for two more. He started coaching the K-State defensive ends in 2003. In 2006, Clements took over as the defensive line coach at San Diego State before coaching the Kansas defensive line in 2008. He returned to his alma mater in 2009 where he stayed until he left for his current gig in Stillwater.

A Texas Tech graduate, Duffie started his coaching career as a graduate assistant at UTEP in 2000. He took a fellowship with the Detroit Lions in 2001 before returning to the college game to coach UTEP’s safeties and linebackers from 2002-07. He has also spent time coaching secondary players at Colorado State (2008-11) and Wake Forest (2012). When he first got to Oklahoma State, he coached safeties before transitioning to corners in 2015. Some of his prominent recent pupils include Tre Flowers, Justin Gilbert, Michael Hunter, Ashton Lampkin, Kevin Peterson, AJ Green and Rodarius Williams.

Hammerschmidt graduated from Colorado State in 1985. He was a student assistant with the Rams in 1986 and a graduate assistant at TCU in 1987. Hammerschmidt spent the middle point of his coaching career actually coaching on the offensive side of the ball. After defensive (and special teams) stints at Duke and VMI, he returned to his alma mater to coach receivers in 1996. In 2001, he was promoted to be the Rams’ co-offensive coordinator and quarterbacks coach. He went on to have offensive stints at Rice, Wyoming, Colorado State (again), the Houston Texas and the University of Houston before joining Gundy’s staff.

It remains to be seen how three defensive playcallers will work, but Gundy seemed content with his decision.

“Well, I felt comfortable with the coaches in our defensive room,” Gundy said. “Most of the guys on my staff have been with me a number of years. So for that reason, they have a pretty good idea of what’s going on. Obviously, we rely on our coordinators, just like everybody else in the country. But in most cases, you’re going to have coaches in each room that are capable of calling offense, defense, could be special teams, based on being in there for a number of years.

“So once Jim decided to leave, then I had to go to work and watch and see and get a feel in meetings and different things, practice, to get an idea of where we were at as a staff. And I became comfortable with several guys being able to help calling the game.”