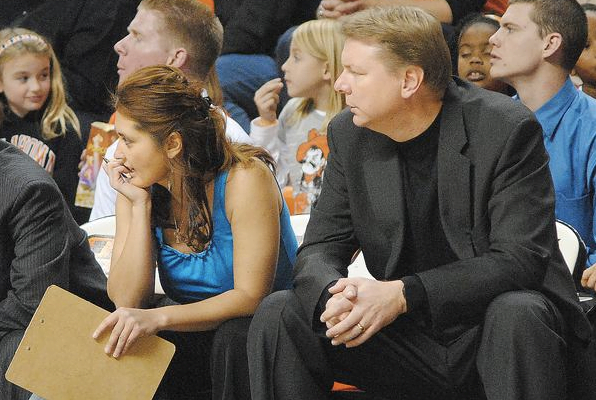 One day, not that long ago, when I was in college, one of my best friends (Nolan) texted me and said, “dude, put down the digital Ricardo Carvalho and get your butt up to GIA, we’ve got some basketball to play.” And that was pretty much how I ended up playing point guard on Coach Budke’s scout team for the next year and-a-half.

There were seven or eight of us who ran scout team and played the role of Danielle Zanotti (K-State), Brittainey Raven (Texas), or Whitney Houston (Colorado). We loved playing against those OSU girls.

The thing that always struck me about Budke and (assistant coach) Littell was the tone they set for the culture of the team they coached. College athletics is much more of a professional run-off than any of us want to admit, but they always made you feel like it was the children’s game we all want it to be.

And he was all OSU.

Coach Budke loved Bedlam, he lived for those games.

I remember the game when Riley dropped 45 against them in GIA and he was rocking the OSU orange blazer like he was the Roy Williams of Stillwater. Gallagher was swaying like it was 2000 and we were at a men’s game. My lasting image of that night is rushing the court and jumping up and down on the logo with Nolan and Dez Bryant (yes, seriously). Coach Budke stood back and watched it all with that silly grin of his.

That smile was genuine too.

One day in practice I was hounding Andrea Riley all over the floor when she suddenly crossed me over and I went sliding backwards across the floor on my butt like I was on ice. Practice stopped, everybody was doubled over laughing including him. I said, “you think YOU can guard her?!” He just shook his head, that same smile strewn across his kind face.

We were given shoes and OSU gear for coming out every day to practice with those girls. He had some incredible teams when I was there. We would stay late and shoot three pointers with his kids, I always pretended like I was Randy Rutherford and launched bombs from Pete’s face near midcourt. Budke always thanked us for helping them out.

We never told him we would have paid money to come hoop at GIA.

He was one of the kindest, gentlest people I’ve ever met. I think you have to be when you coach women’s sports. He was authoritative but delicate with his words.

One practice when the girls were getting ready for OU and there was more horsing around going on than there should have been, Budke stepped in. “I don’t know if you girls know this, but Courtney Paris might literally be the best women’s basketball player in the history of the world. She might be the best women’s athlete ever.”

There were snickers from the five of us on scout team. He came over to our mini-huddle and told Nolan (who was channeling his very rotund African-American female look) “go at them, hard.”

So the first time down Nolan pins a ball that was literally above the box on the backboard and flings it back to one of our guards who takes it the other way. Everyone in the gym was stunned.

Budke sauntered over to our group, which was now huddled up again, and said, “um…yeah, I don’t know if you guys have ever seen Courtney Paris play, but she can’t do that.” And then he just started cracking up.

I didn’t know Coach Serna as well, but to not at least acknowledge her as well Senator Olin Branstetter and his wife would be a disservice to everyone. Serna always helped coordinate our playbook and made sure to point out how fundamentally flawed we were what with our alley oops and fade away threes. I don’t think she liked the alley oop.

There will be a lot of articles and posts and words thrown in the general direction of all three of these families as well as the more macro OSU family in the days and weeks ahead. Obviously none of them can ever alleviate whatever the feeling is when you lose your dad or your husband or your girlfriend.

The words are necessary though because they’re how we move forward with things and they’re also how we remember things.

Coach Budke was nicer to me and my scout team teammates than he ever needed to be. He seemed like a good man with a huge heart who truly loved coaching girls basketball.

He was the most Oklahoma State coach of any I’ve ever encountered.

I watched the press conference this morning with tears in my eyes at the thought of going through this dark valley of sadness and pain once again.

We will bounce back of course. Not today and not tomorrow and probably not for a few months or maybe a year. But we will bounce back because that’s all we know how to do and that’s what Coach Budke would want us to do. We’re in the “0-16 Big 12 season” part of this story right now, but we’ll bounce back to make the tournament, whatever that means in the future.

As the willowing plume of devastation sets in over campus on day that was supposed to be the football team’s final baton handoff for the anchor leg in the relay to the national title game, these will be the things I remember about coach Budke:

I will remember him in that orange blazer sporting that huge smile, standing right at the epicenter of campus in Gallagher-Iba Arena, wich is where he always wanted to be.

I will remember him him awkwardly pulling his 6’5 frame off the bench in GIA during big games and petitioning the crowd with his arms flapping like that of a pterodactyl to be the 6th woman on defense for his squad.

And I will think of him doing the same thing right now, asking all of us to come together as family and rally around for those who need us.

Also, here’s a note from Nolan:

I had the pleasure of playing on the OSU Women’s Basketball scout team in college for two years with Pistols Guy and a few others. It started off as something to do after class and the only way for us to get to play in GIA on a consistent basis but the more I was around Coach Budke, Serna and the rest of the Cowgirl Basketball program, the more orange I got.

These weren’t just good basketball players and good coaches, they were good people.

With all the struggles on and off the court with the Cowboys, there was a time where I would enjoy GIA the most when there was a Cowgirl home game. This wasn’t just because Budke took them from going 0-16 in conference play to the Sweet 16 in a two year period. Not just because he had taken the program to a place it hadn’t been in decades.

The reason I loved watching was because these were my friends. These coaches made my knucklehead friends and I feel like we were just as much a part of the program as anybody else. I’ll always picture Coach Budke hyping up a crowd in a bright orange blazer with that infectious smile and Coach Serna clapping with approval smiling bright as well.