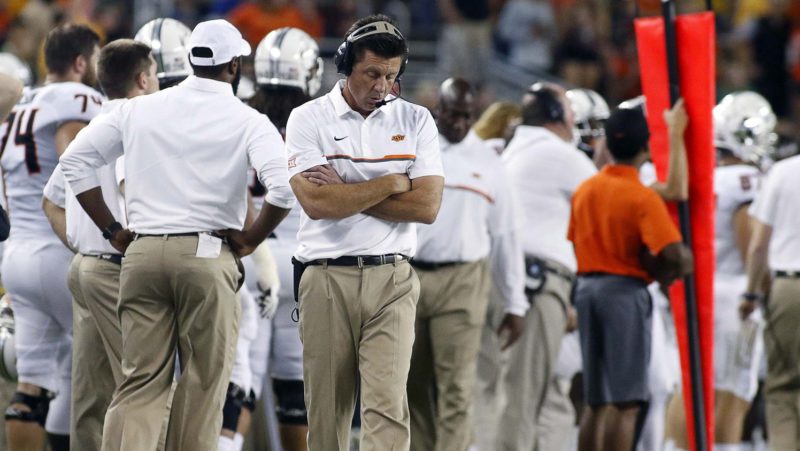 Roughly two weeks ago, Mike Gundy stood at a podium and explained what he liked about his 2017 recruiting class. It was National Signing Day, after all. Most questions were in regard to which running back could play early and how he and his staff evaluate the “cerebral” qualities of prospective Cowboys.

But one question had to nothing to do with depth charts. Gundy was asked how consistency among his coaching staff has benefited him in recruiting.

“It makes a big difference,” said Gundy. “Your recruiting class is impacted when you lose a coach right before or after a bowl game, but even more so if you lose one a week or two before signing day.”

Just two days after this press conference, offensive line coach Greg Adkins was gone. Dismissed from the program, presumably do to an inability to bolster an offensive line group that — while improved — has yet to arrive.

Gundy brought that issue up during that above-mentioned press conference.

“We had two guys a month and a half ago leave to go to other places, but for the most part we held everybody. Really we held everybody except for the ones that come in and see how things run in our program and they see that maybe it’s not for them.”

Almost a week after the Adkins news was made public, Gundy’s staff lost another member in ace recruiter and running backs coach Marcus Arroyo, who has taken a job as co-offensive coordinator and quarterbacks coach on Willie Taggert’s staff at Oregon. The fallout for this one is yet to be determined.

Coaching turnover is not new in Stillwater. Gundy has seen his fair share of assistants leave both by his choice and their’s. From 2009-2013, he employed four different offensive coordinators. But recently it had stabilized. Or we thought it had stabilized. His current coordinators have both been in their positions for four seasons now. He had everybody coming back.

Then … poof. Such is life as a head college football coach.

In place of Adkins, the Cowboys brought back Josh Henson, who was an offensive analyst for OSU last season and has served two prior stints on their staff including tight ends coach and recruiting coordinator from 2001-04.

Henson has spent time at several stops including offensive line coach and then offensive coordinator at Missouri. Twice he’s been named one of the top 25 recruiters in the nation. Presumably this will help as a stopgap for what they are losing in Arroyo on the recruiting front.

While the Cowboys seem to have knocked it out of the park with the hiring Henson, Gundy will be tasked with the challenge of not only finding Arroyo’s replacement as a running backs coach but simultaneously recruiting the position. Not to mention, recouping the loss of Arroyo’s impact on recruiting across the board.

Gundy hates the lack of continuity from year to year, but he’s proven himself terrific at bringing in the right kind of coaches to keep the machine running. With one down and one to go before spring ball, hopefully he can work some of his magic once again.