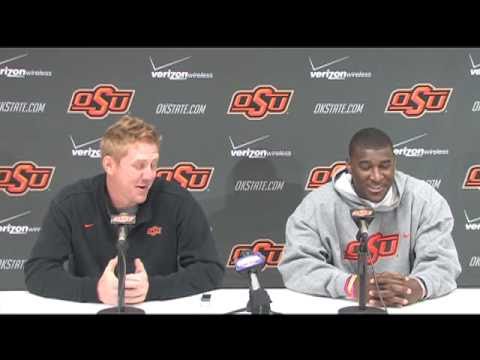 More like good morning or good afternoon but whatever, you get the point. They’re both coming back. The announcement was awesome too if you haven’t seen it. Weeden sat down and nervously talked about the discussions he had with his family, friends, and NFL people (hopefully not Deion) then all of sudden blurted out, “Justin Blackmon is coming back [dramatic pause] and so am I [hand clap, lean back]” he could have left right then and nobody would have thought twice about it.

The most interesting thing to me was that it seemed like Weeden was closer to leaving than Blackmon. Judging from the way they both talked about interacting throughout the whole process it felt like Blackmon made his mind up pretty early and Weeden struggled with it more, only finalizing his decision when he knew he’d have his ace in the hole, and in the slot.

I would have imagined it to be the other way around for two reasons. First, Blackmon had a lot more money staring him in the face. Second, Weeden’s success at OSU doesn’t appear to be predicated upon who is running routes for him, Blackmon’s success at OSU may or may not depend on who is throwing to him. There’s a greater variable with Blackmon. He doesn’t need to play Larry Fitzgerald to Clint Chelf’s Derek Anderson for 12 games. And I don’t need that either.

People don’t understand how important Weeden is to this team, or how good he’s been. Losing Blackmon would have stung, losing Weeden would have been devastating from an athletic program perspective. Because he’s coming back Gundy can go hunt down offensive coordinators with a golden ticket to being in the top 5 nationally in offense. That might be the best part this whole thing. Gundy holds all the cards now in the OC hunt.

The way Weeden handled questions and discussed the process was impressive. Even though it was his press conference he never really made it about himself. Constant praise for Blackmon’s accomplishments, chatter of how tight-knit his team is, and an air of “yes, I run this team, but I respect my coaches and love my teammates” — what else do you want from your QB1?

The lack of communication between Blackmon and Gundy bothers me a little bit. I know everyone was in a great mood and so it was funny that he was at Louie’s when he heard Blackmon was coming back but what he said about his conversation with Weeden was weird. In case you missed it, Gundy, when talking about how he handled the Blackmon conversations said:

What does that even mean? Hopefully, and I think this is most likely the case, he wanted to leave Blackmon alone and not have a lot of influence upon his decision. If so, that’s a really classy move by a coach who’s climbing the ladder in my eyes in terms of how he handles his program. That’s something Mark Richt or Jim Tressel would do so it’s good to see out of Gundy.

Hopefully it doesn’t mean his relationship with Gundy has soured and they’re talking to each other through their quarterback. I’m probably reading too much into this.

Lastly, I thought Weeden was kidding when he tweeted that he’s going to be on the golf team this spring also. Apparently he wasn’t. The guy has 6 hours left before graduation, is the reigning All-Big XII 1st team quarterback , and gets to play golf every day at Karsten for the most decorated team in NCAA history.

I would have come back too.