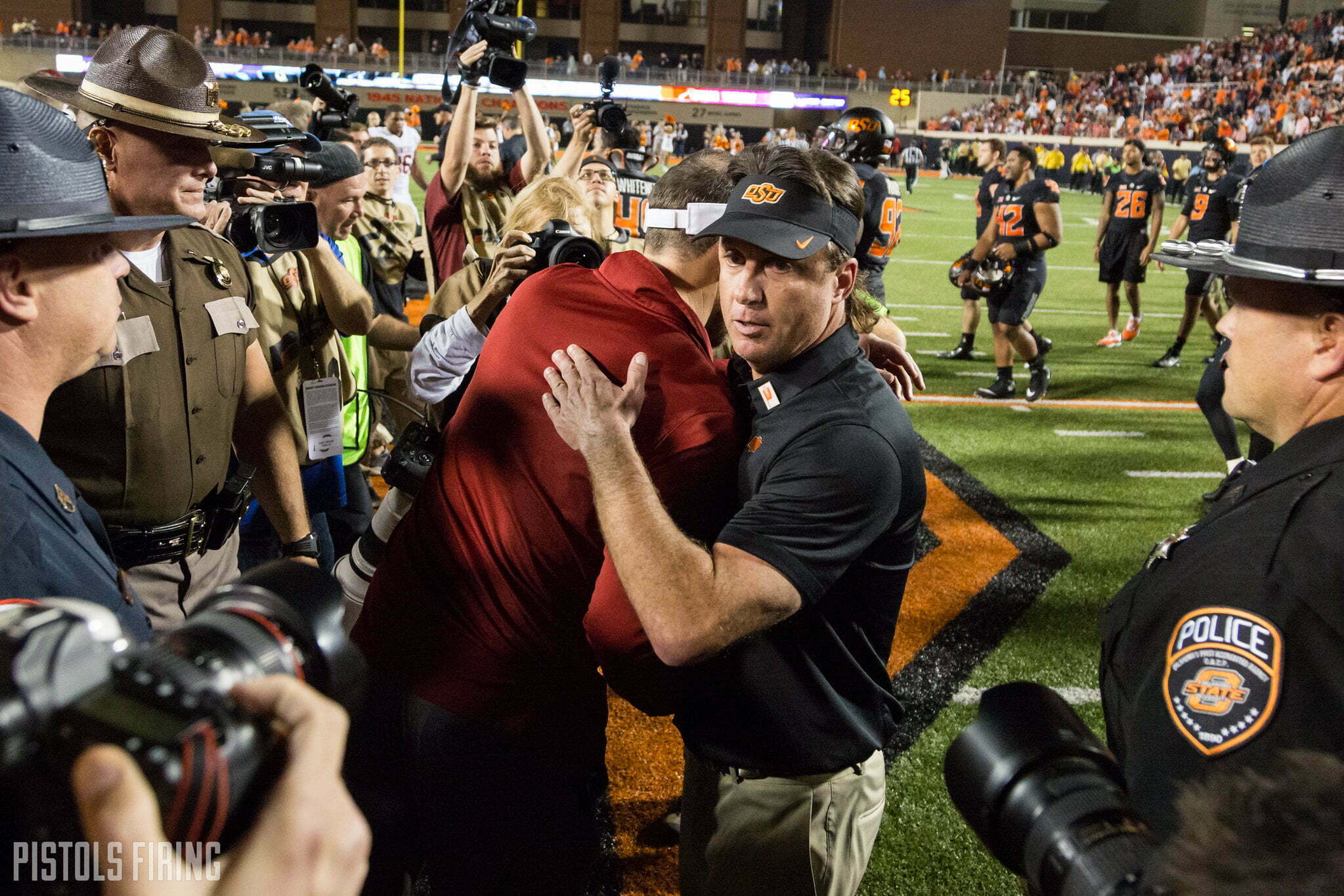 As endearing a spectacle as college football rivalries can be — and as fun as they can be for a fanbase (depending upon which side you reside) — they can be an absolute headache for head coaches (again, depending on which visor hangs in your office).

But if you could remove all emotion from college football — which I understand is an impossibility and would render the sport superfluous — rivalry games, in and of themselves, only count for one tick in either side of the win-loss column.

When the Cowboys and Sooners square off on Nov. 21, it will be Mike Gundy’s 200th game at the helm of Oklahoma State. He’s won 134 of them (67.3 percent) and has accomplished more over his 15-plus years than most coaches ever do at any school. Compare his to the achievements of former Cowboy coaches and he has no peer.

But there’s one record that holds more weight than others among OSU’s fanbase, the state and, at least historically, among university brass: 2-13.

That’s an insurmountable number for any head coach to face, without the built-in bad blood of growing up smackdab in the middle of rivalry’s epicenter, being recruited by both schools and playing in a few of those games yourself — including one of the biggest gut-punch losses your side’s fanbase has ever experienced.

Those 15 games account for roughly 7.5 percent of every game he’s coached at OSU, but they represent the yardstick by which his career will always be measured.

It’s a harsh reality for an otherwise acclaimed coach, especially when you consider that Gundy’s tenure has coincided with inarguably the best consecutive head coaching regimes at Oklahoma, one of college football’s historic powerhouses.

But Gundy’s not the only coach with that type of albatross to bear.

Take Gus Malzahn who like Gundy, has a Bear Bryant Award in his trophy case and, also like Gundy, plays David to an in-state Goliath. During his tenure at Auburn he’s a respectable 3-4 against Alabama.

Will Muschamp has also been on the short side of two rivalries during his career. He is currently 0-4 against Clemson as South Carolina’s head coach and was 1-3 against rival Georgia during his tenure at Florida.

Jim Harbaugh has also been a part of two major CFB rivalries. He’s famously 0-5 against Ohio State since taking over at Michigan. But prior to his NFL stint, he was 3-1 against USC during his time at Stanford.

Of course for every have not, there are your haves like Bob Stoops and Urban Meyer who seem destined to come out on top of their schools’ rivals. Meyer was a coach several fanbases came to hate. At Utah, he was 2-0 against rival BYU, at Florida he was 5-1 each against rivals Georgia and Florida State and his Buckeyes went 7-0 against Michigan.

At the risk of coming off like a Gundy apologist, I thought I would paint a broader picture of just how hard it is to beat OU in Bedlam. First off, it’s hard for anyone to beat OU, period. But when you are going up against a blueblood in one of its heydays, the deck is stacked against you.

Just look at the Mt. Rushmore of OU football coaches — Bud Wilkinson, Barry Switzer, Bob Stoops and now Lincoln Riley. Gundy’s OSU has existed in the shadow of two of them without the normal valley between peak regimes.

Switzer went 15-1 against Oklahoma State. Jim Stanley was the only OSU coach to beat him back in 1976 with Jimmy Johnson and Pat Jones coming up winless in 10 combined tries against Switzer.

In 17 meetings during his historic tenure, Wilkinson never lost to Oklahoma State/A&M. Even Bennie Owen, Oklahoma’s second coach ever and the Sooners’ field’s namesake went 9-2-2 against the team now known as the Cowboys.

Historic head OSU coach Jim Lookabough went 2-8-1 against Oklahoma while the majority of his career coincided with what can be considered a valley in Sooner land.

Of course the outlier — and the giant hat in the room — is Gundy’s predecessor and former boss, Les Miles. He went 2-2 against Stoops, beat two Big 12 champs and never played an OU team that would win less than 11 games on the year.

But even Les tasted the other side of a rivalry. After winning his first three meetings with Alabama after moving on from OSU to LSU, he went 2-8 over the next decade. That deficit contributed to his ousting from Baton Rouge, despite a .770 overall win percentage at LSU and a national championship.

Rivalries can be tough for fans, but they can be daunting for head coaches. And few people have more invested in one than Mike Gundy does in Bedlam.

This isn’t a call for pity for the mulleted one. It comes with the territory just like the big salary and SportsCenter hits. It’s just a reminder that it’s not easy being David, especially when your Goliath is thriving and lives right down the road.