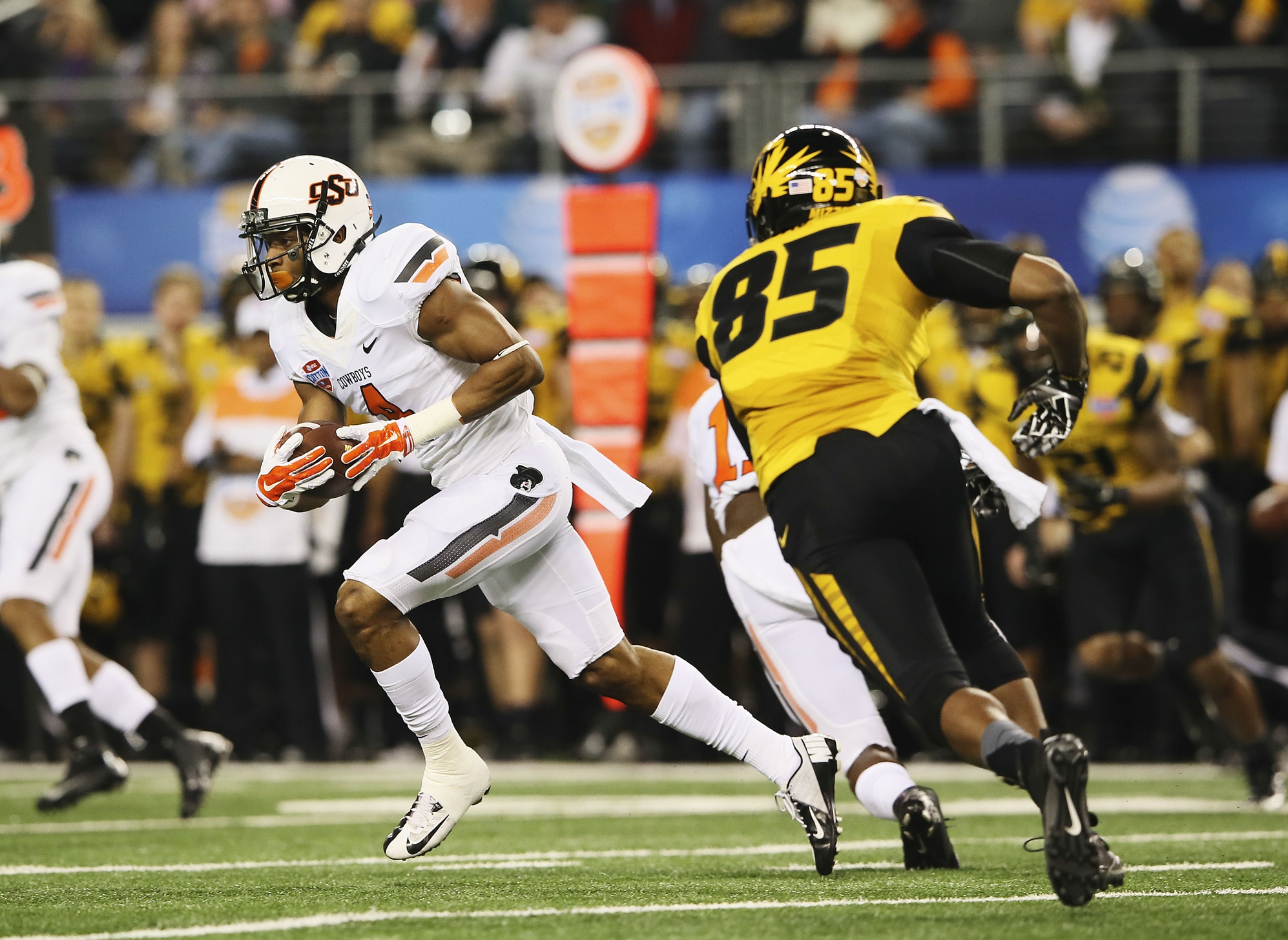 Uni Heisman: One final time for No. 4. I might have to retire this superlative for future seasons, it’s unfit for mere mortals.

Uni Groza: It’s quirky but I love that Shaun Lewis wears his jersey like he’s playing for FSU in 1993. Somebody get that man Warrick Dunn’s backflap thing and let’s call it a career.

Most questionable bowl setup decision: Look, I get that that cardboard signage around the perimeter of the field probably brought in more money than 95% of the guys on either team will make professionally but can we maybe think about moving it back a few feet next year?

I don’t need Clint Chelf severing an ACL while trying to hurdle a Carl’s Jr. sign.

Best tribute (non-Katniss division): It was super nice of the OSU band to give this shout to my two-week-old son. In Dallas, no less! h/t Kayla McGinty on the photo 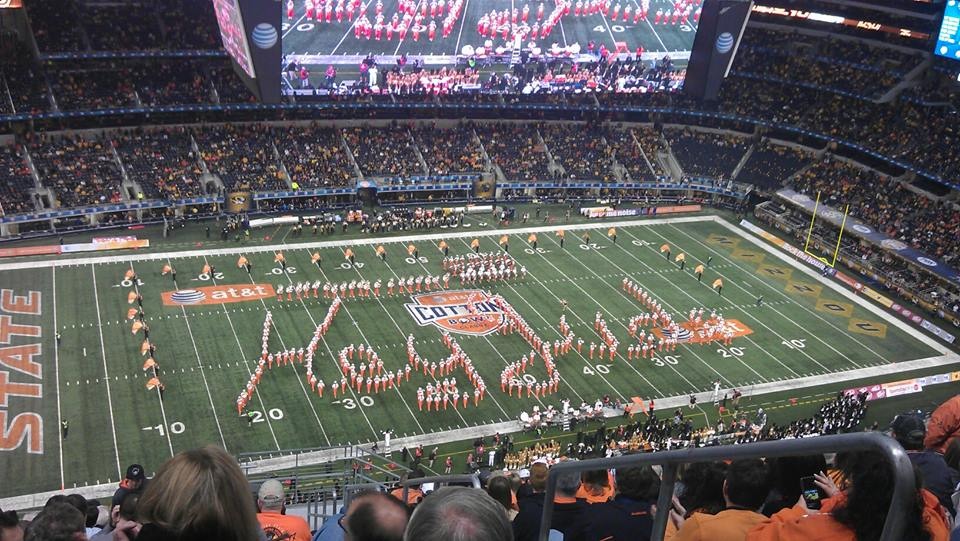 Train lead singer looks like FSN's Jim Knox. Or maybe it's the other way around.

Logo that needs a refresher: How about the “STATE” in our endzone above? I could go for that to be either updated out of the Les Miles era (it’s not on any of our football uniforms anymore) or thrown back to the 1980s.

Most gruesome injury: Brandon Garrett’s hangy leg was just about as horrendous as it gets. Here’s a look if you haven’t eaten breakfast yet.

His leg is not going the right way. My gosh – pic.twitter.com/INdznY9mUe

Photo of the game: This was amazing.

Pregame video quote OSU would like to have back: “We can score at will.”

Best play: The Tracy Moore fingertip catch was outstanding, and he had seven for 100 yards. Maybe his best performance since the 1945 Cotton Bowl..

White guy narrative: I’m pretty sure Charles Davis said that Caleb Lavey “uses his mind” to get interceptions right after Lavey dropped a pick at the end of the game. Or maybe he’s just a really good, athletic college football player?

“Wait, is this thing on” moment of the game: Only Dez, man, only Dez.

Worst marketing: It almost feels like nobody knew this game was happening. Maybe that’s a “me watching too much ESPN” problem but my gosh, can we at least acknowledge that two top 15 teams played each other in prime time?

Worst marketing II: Are 34,400 American Idol commercials in four hours supposed to convince me to watch the show or not watch the show?

“It wasn’t the defense’s best performance” stat: This one…

Over last 6 games of regular season, OSU opponents were 3-55 when converting 3rd and 7 or longer. Missouri has converted three 3rd-and-10s.

Biggest flag: But not bigger than all the ones in the Fiesta Bowl put together!

“Um, is he going to die on live television” moment of the game: This is still amazing to me. Did they boil the water or something? Why did he react like he was getting tased?

Story that’s not a story but should be: Justin Gilbert finished this season with seven picks (one shy of the single-season OSU record) and yet teams kept throwing at him. What does that tell you about Kevin Peterson?

Player I was surprised by: Look, DGB is great, a monster. But he’s not as thick as I thought he might be. He’s like what Calvin Johnson would look like if you deflated him. That’ll play in college but if he wants to be a star in the NFL, he needs to get bigger.

Call that genuinely made my night: We got one final Kyle Stanley!

I know the ending wasn’t ideal but I’m not going to lie, this year was a lot of fun. It was disconcerting at times to have such an elite defense and my faith in our offense never really took root but from Gundy’s Silly Pete hoodie to the SI madness to Kyle Stanley, the imprint was left.

I’m not sure anything will ever touch 2011 for me but for a team that trudged off the field in Morgantown 100 days(ish) ago, we had a pretty great stretch of games and moments to end 2013 and kick off 2014.

And now we get Marcus Smart trying to slay KU Part II.

It’s a pretty good time to be a Cowboy.