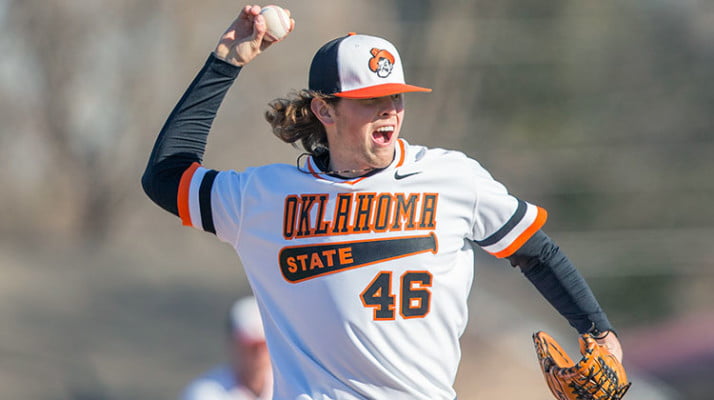 It’s not often a starting pitcher is pulled from the game with a no-hitter still intact.

But that’s what happened tonight as the Cowboys got back in the win column with an 11-1 victory over Washington State. The offense provided the fireworks, scoring three runs in the 1st, and that’s all starter Jon Perrin needed. He cruised through six innings, allowing just two walks while striking out six.

But with the team up 6-0 and heading to an obvious victory, OSU elected to go with Conor Costello on the mound to start the 7th despite Perrin having a goose egg in the hits column.

OSU hasn’t had a no-hitter since Joe Giordanella blanked the Sooners 8-0 on April 1, 1985. It looked like Perrin was on his way to etching his name in the record book tonight, and normally I’m all for letting a guy chase a record. However, pulling him from the game was the right decision, for a few reasons:

Perrin led the team last year with 102 innings pitched, 19 more than the next closest player. And that was with one of the best bullpens in the nation.

OSU has good depth at starting pitcher, but Perrin is the ace of the staff. He’s going to be relied upon to anchor this group, and he can’t do that if he’s on the bench injured from being overused. Six great innings tonight isn’t as valuable to the team as six great innings in May.

Here’s what Holliday had to say to okstate.com after the game: “I understand he had a no-hitter at the time, but we’ve got to protect these kids and keep them healthy for the long haul. There’s nothing about a personal accomplishment right there that outweighs the value of having that guy healthy throughout the year.”

Sure, the coaching staff could have left Perrin in the game to go for that no-hitter. Maybe he gets it; maybe he gives up a hit to lead off the 7th. But it’s the same concept as leaving the star quarterback in the game with the team up 21 late in the 4th. It would be more foolish if he’d been left in and suffered an unnecessary injury.

Perrin wasn’t needed in this game anymore; he’d done what was asked of him, quite exceptionally I might add. He ended the team’s losing streak, pitched six near-perfect innings, and only threw 84 pitches. That will leave him rested for his next start.

3) Injuries aren’t anything to mess with.

Coming off of minor surgery in the offseason, Perrin was limited to a pitch count in his first start. He struggled in that game, lasting 1.1 innings and allowing three runs. He looked excellent tonight, but the coaching staff still wants to monitor his return.

The surgery was to remove a bone spur, and while minor, it’s also something that requires caution moving forward. Perrin chose to return to Stillwater after being drafted, and wants to make the most of his senior year. As I mentioned, it’s a long season, and I’m sure pitching coach Rob Walton wants to have his ace pitcher for the entire year – especially if Omaha is in the cards.

Other quick notes from tonight’s win:

Catcher Bryan Case hit OSU’s second home run of the season, a two-run shot to left in the 9th… Nine different Cowboys had a hit, including eight starters… Costello picked up OSU’s second save of the season in his first three innings on the mound this year… Shortstop Donnie Walton missed his fourth straight game with a wrist injury. There’s been no announcement on his return… OSU travels to Mesa, Arizona, to take on the Utah Utes. First pitch is scheduled for 2 p.m. Central.