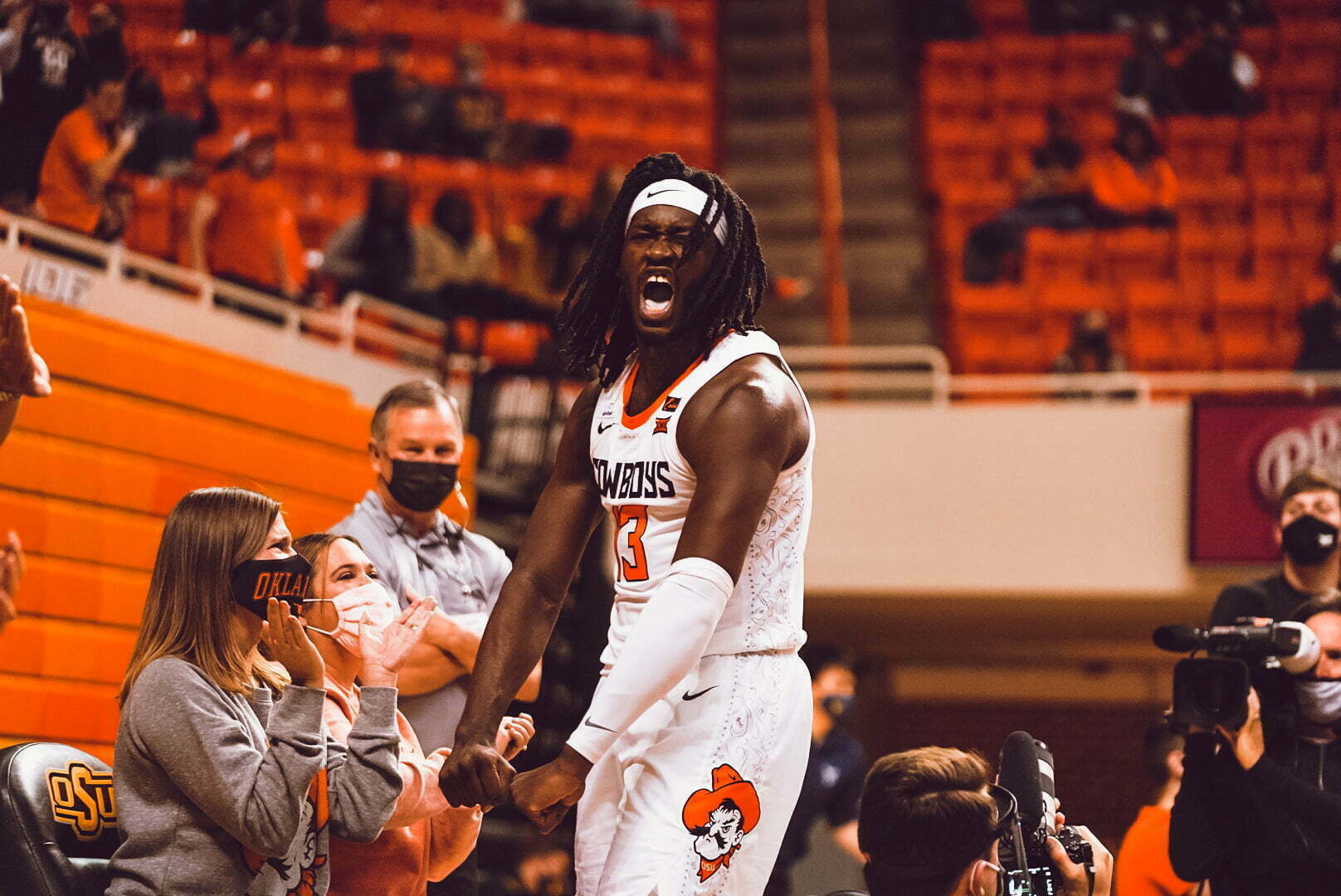 STILLWATER — It wasn’t hard to notice the Cowboy basketball team walking into the Colvin Recreation Center — the shortest Cowboys were as tall as anyone else in the gym.

Oklahoma State senior guard Isaac Likekele is credited with the idea of organizing the basketball team’s trip to the student body’s rec center. Likekele made a post on his Instagram story announcing the entire basketball team would be at the Colvin to play. The basketball team showed up and played a trio of pickup games with about 50 students surrounding the court.

Only five players on the Cowboys’ roster have experienced a non-pandemic school year at OSU. With less restrictions, Likekekele said it was important for the team to show its face among the student body.

“I’m trying to help show [the team] how to interact with the campus, interact with the people,” Likekele told PFB. “We show love, not just intentionally just to get love back. We show love because that’s what you’re supposed to do. Whether they come support or not, we gonna still continue to show love. I just feel as if whenever you go around and support everybody else, you’re gonna be supported.”

A team of Likekele, Rondel Walker, Donovan Williams, Matthew-Alexander Moncrieffe and Tyreek Smith were the first Cowboys to take the floor. They dispatched of their Colvin competition in a matter of moments, a 7-0 skunk, but not before a few highlights were made.

Likekele wore a neon green ski mask rolled to the top of his head like a beanie, but on one defensive possession, he rolled it down. With the mask fully covering his face, Likekele made a steal and streamed down to the other end of the floor and bounced an alley-oop pass off the backboard that Moncrieffe caught and slammed down. Moncrieffe lifted himself up on the rim and smacked the glass for good measure.

Another group of OSU students took the floor against the same set of Cowboys but faced similar struggles — another 7-0 skunk.

In the second game, Moncrieffe showed some of his offseason work, hitting a smooth step-back 3. He didn’t attempt a 3 all of his freshman season. Later in that game, Moncrieffe was unable to convert another alley-oop attempt has he had to duck away from hitting his head on the rim.

The third game saw Bryce Williams, Keylan Boone, Carson Sager, Woody Newton and Bernard Kouma take on a group of the student body. Boone was the highlight man early, effortlessly driving past a defender for a dunk before crossing another over and hitting a 3 on the next possession.

The first basket from the “regular” students came via a banked-in 3. That third game was tighter, but still never in any real doubt.

It was a fun hour or so complete with the rest of the Cowboy roster watching on from the sidelines. Chris Harris and Avery Anderson in particular were acting as hype men, storming the floor every time someone dunked or hit a 3.

The plan was for the team to play a little intrasquad pickup game, but that fell apart as they discussed which team would start with the ball. So, to end it, Moncrieffe and Bryce Williams traded highlight reel dunks, with Moncrieffe shutting it down with a 360, between-the-legs jam to the oohs and ahhs of the surrounding spectators.

“Honestly, it was just fun,” Likekele said. “It was real fun to be out there, and the students, they enjoyed it. That’s what it was all about, really.”