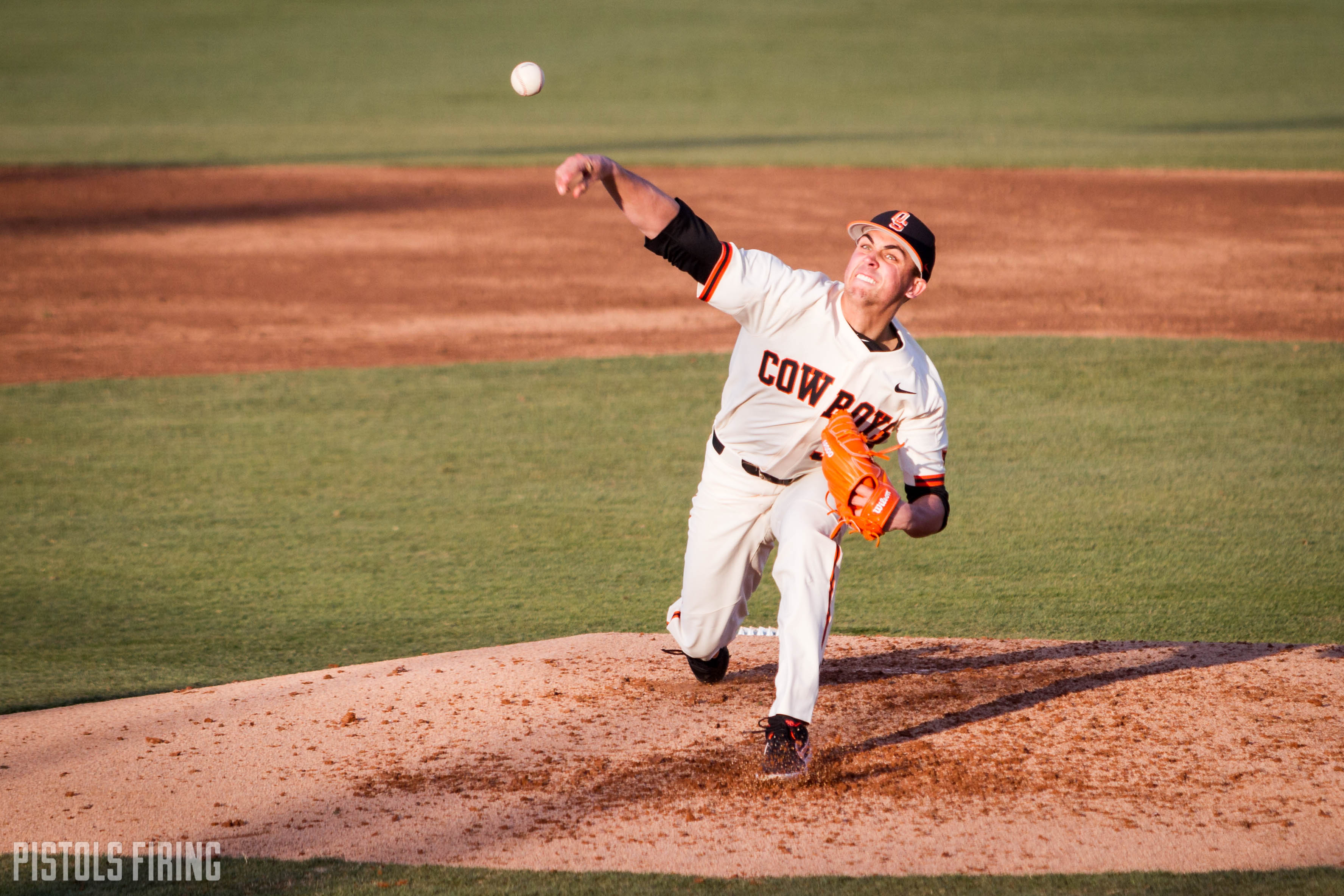 STILLWATER — The Cowboys’ last first day in Allie P. Reynolds Stadium was a dominant one.

Oklahoma State defeated Little Rock 8-3 on Wednesday in the first game of Allie P.’s victory lap. The Cowboys’ most fruitful inning came in the fourth. OSU’s five-run frame started with a Dylan Gardner single. After the Cowboys (3-1) loaded the bases, Gardner scored one of the oddest runs in Allie P.’s long history. A wild pitch walked Trevor Boone, and when Little Rock catcher Garrett Scott retrieved the ball, he picked it up with his mask, which is illegal. That resulted in the runners advancing, and Gardner crossed the plate.

Carson McCusker, Boone, Andrew Nagivato and Colin Simpson also scored in the inning. The final two crossed the plate off a Bryce Carter single to right field. Carter finished Wednesday’s game 2-for-4 with three RBIs. He is up to a team-high seven RBIs through the Cowboys’ first four games.

“The coaches here really put us in a good position to succeed,” Carter said. “Throughout the entire fall, they’ve preached on approach and mechanics, and all that stuff. I think for me, I kinda found my stride with the last couple weeks left in the fall and kept it going into the season.”

C.J. Varela drew the midweek start for OSU and will forever be the Cowboys’ final opening-day pitcher the Allie P.’s history. He allowed no runs in his four innings of work while striking out six Little Rock batters.

“The changeup was (working well),” Varela said. “I think most of my strikeouts were on the changeup, and I think a couple were on the slider. I felt really good with it. It’s usually my out pitch, and luckily it was working today.”

The Trojans (0-4) had an interesting pitching strategy Wednesday. In the eight innings Little Rock played on defense, the Trojans used nine pitchers. No OSU batter faced the same pitcher twice, as Little Rock brought a new pitcher out at the start of every inning.

McKinley Moore and Jose Torres tied to face the most OSU batters of any of Little Rock’s pitchers, each facing only six. As a staff, the nine-man unit allowed seven hits, walked 11 batters and struck out 10.

“On (Wednesdays) that tends to happen,” Carter said. “They had a bunch of new guys, so it was a lot of guys we didn’t know anything about, so it’s just stick to your approach and don’t let the pitcher dictate what you’re gonna do. It’s actually good practice for the weekend to not get so caught up in scouting reports and everything.”

The Pokes will be back in Allie P. on Friday, as OSU hosts Wright State in a three-game series. The first pitch Friday is scheduled for 4:05 p.m.

“A night like tonight, it’s cold, and it’s wet,” OSU coach Josh Holliday said. “It’s not a great environment for offense, but we did enough. We’ll take the win and get ready for the weekend.”