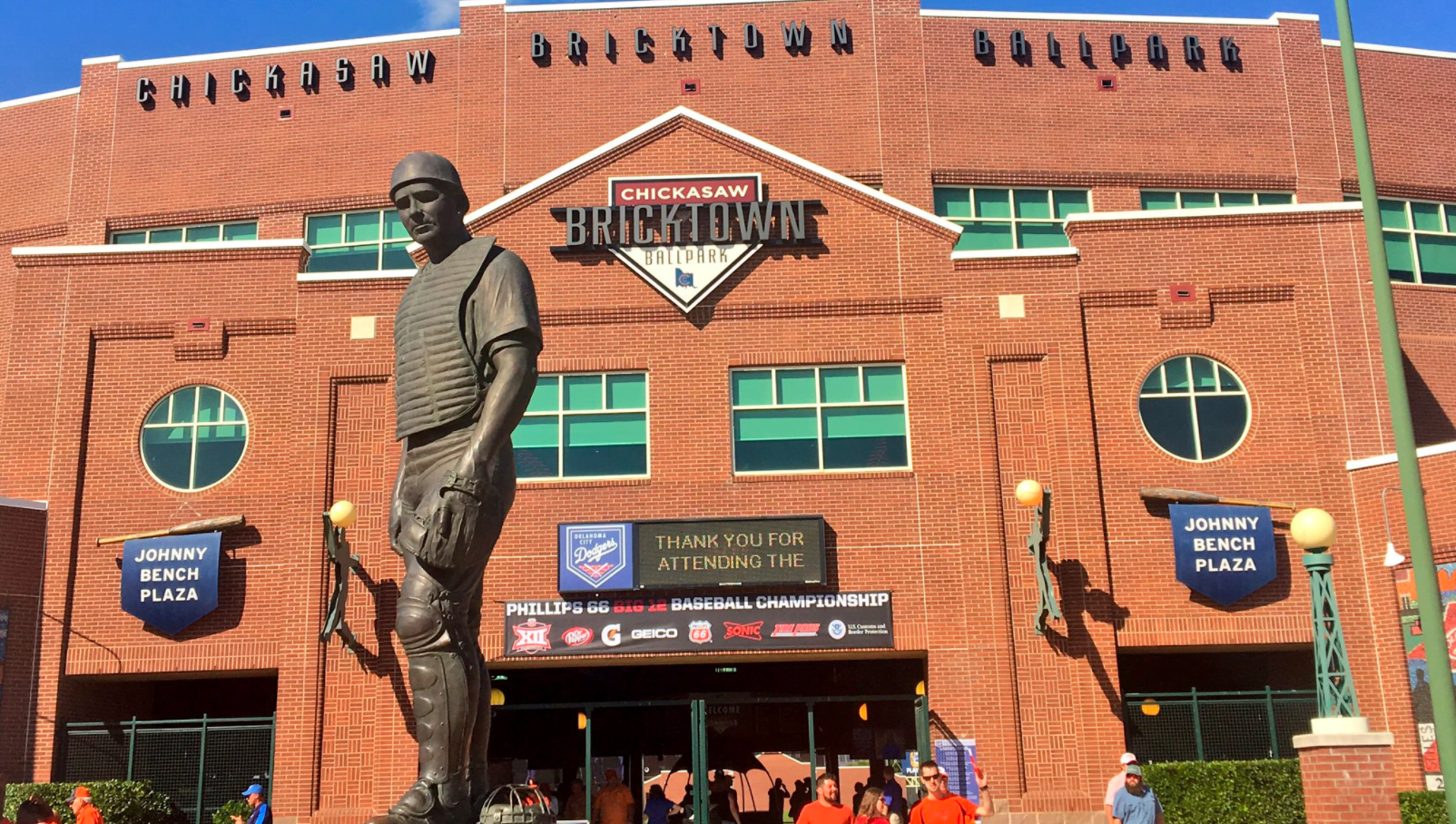 Oklahoma State held on in another nail-biter on Sunday in the Big 12 title game, beat Texas 6-5 and won their second-ever Big 12 Tournament championship (and first since 2004!) In doing so, they became the first No. 8 seed in Big 12 Tournament history to take home the crown.

“It was an unbelievable performance by these kids,” Josh Holliday said after the win. “The kids at the table had a huge part in today’s game, but the whole group should be recognized for the way they pulled together as a team.”

It was a drama-filled affair from the opening pitch. After the Cowboys loaded the bases in the first inning, Bryce Fischer went up 3-0 in the count before Longhorn starter Morgan Cooper was able to punch him out. Once again, the Cowboys left three men stranded, something that had become a habit this weekend. Incredibly, it never really came back to bite them.

With two outs, Cowboy freshman pitcher C.J. Varela hit Travis Jones with a pitch. Jones stole second and the Longhorns rattled off three-straight base hits, taking a 2-0 lead into the second.

Cooper fell into stride, rolling to a 1-2-3 second inning. Across the field, things weren’t going as smoothly for Varela. Rob Walton went to Blake Battenfield after Varela gave up three hits and two runs. With what should have been a fly-out, a Jon Littell error saw runners advance.

Again in the third, Ryan Cash led off with a single to right. This time Garrett McCain paid it off with a double RBI to cut the lead to 2-1. A sac fly from Colin Simpson got McCain to third base but Morgan Cooper escaped with a controversial third strike on Ryan Sluder which drew protests from the first-base dugout and Josh Holliday in particular.

In the bottom of the third, Battenfield gave up a double on a miss off the left field wall and a run off a line drive to right field that just missed the outstretched paw of Ryan Cash.

Oklahoma State had trouble finishing innings. The Longhorns were 8 of 16 with two outs, including four RBIs.  The Longhorns first three runs came off the bats of legacy. The first-inning two-run RBI was hit by Kacy Clemens. The third-inning run came of a Kody Clemens hit. Both sons of Roger Clemens.

Connor Mayes took over on the Texas mound in the fourth but couldn’t make it to two outs before loading the bases and heading to the dugout. David Pierce went with Chase Shugart to try and get out of  jam. But Ryan Cash came up big again. This time with a two-run single to knot it up at 3-3.

“Fabulous,” Holliday gushed of Cash. “Ryan Cash was awesome. Little man woke up and came to play today. That’s all there is to it.”

Garrett McCain followed that up with his own RBI to put the Cowboys up 4-3.

In the bottom of the fourth, Walton went from one Battenfield to the younger, bringing in Peyton Battenfield. But the star of the inning was Ryan Sluder who had three-straight pop outs to send to send it to the fifth.

Get that man a mask because Ryan Sluder is committing robberies in CF! 2 Web Gems and all three outs for #okstate CFer in B4! #SCTop10 pic.twitter.com/lxiAravKML

Sluder continued to make his presence known with a single in the top of the fifth. Bryce Fischer singled as well on Texas pitcher Jake McKenzie. But McKenzie was able to leave them both stranded with a strikeout of Dustin Williams.

The bottom of the fifth saw the Cowboys continue through their bullpen to go to Jonathan Heasely. After an out and two walks, Walton continued beating a path from the dugout to the infield. Tyler Buffett took over with one out and runners on first and second. He walked Bret Boswell to load the bases. But Garrett Benge came up with a huge unassisted double play to get the Cowboys out of the fifth unscathed.

It takes two! @GBenge7 snags a line drive and dives to tag 3rd base to complete a double play and end the 5th inning! #okstate leade 4-3! pic.twitter.com/SIlSBvjYxg

McCain continued his big weekend with a RBI double into center field extending the lead to 5-3. In the bottom of the sixth, Texas got runners in scoring position but Buffett was able to get out of trouble again, holding onto the 5-3 lead heading into the seventh.

Bryce Fischer’s solo home run in the seventh pushed the Cowboy lead to 6-3. After one out, Walton subbed out Buffett for Cole Hearrean who threw just one pitch, a base hit to put runners on first and second. Trey Cobb tried his hand but gave up two RBI singles.

Texas closer Beau Ridgeway made things uncomfortable for OSU fans at “The Brick” and at home alike with a 1-2-3 inning in which he retired both Cash and McCain — each for the first time in the game.

The Cowboys leaned on Carson Teel for the second time in as many games and the left-handed sophomore didn’t disappoint. Teel pitched two innings, giving up two hits and no runs. Freshman shortstop Cameron Dobbs had an up and down week but fittingly secured the win on a pop out by David Hamilton.

OSU defeats Texas and gets into the NCAA tournament. #OSUCowboys #Big12 pic.twitter.com/B5rVLCYrwc

Head coach Josh Holliday got choked up after his 200th career win. He talked about the miraculous run and what it was like to be the first 8-seed to hoist that trophy.

“I’m speechless,” said Holliday. “To see it finally come together for so many of them … it’s been a tough run. The commitment to OSU baseball by kids like Buffett and Cobb, all you want in your heart is for them to have a good experience. It’s why you coach. I don’t have a whole lot else to say other than that’s a courageous bunch of kids.

“I’m very humbled and in awe of the kids right now.”

• Oklahoma State’s RPI rose 13 spots to No. 44 coming into Sunday. There was talk as to whether the Cowboys had a case at an NCAA bid even if they lost today. They have the No. 2 strength of schedule in the country. With today’s win they gain an automatic bid. More baseball! The NCAA field will be announced on Monday.

• McCain got caught trying to steal a base for the first time this season. He was 19 of 19 on stolen bases before today.

• The wind may have robbed us of what seemed like six home runs between the two teams.

• Oklahoma State started 0 for 6 with runners in scoring position but took advantage of two out of the next three.

• Freshman Ryan Cash (an all-name nominee, to be sure) had a career-high four hits. Went 4 of 5 with two RBIs and his first double at Oklahoma State.

• Not to be outdone, first-team All-Big 12 honoree Garrett McCain earned his Most Outstanding Player of the Tournament award with another great game. McCain went 3 for 4 with three RBIs and two doubles.