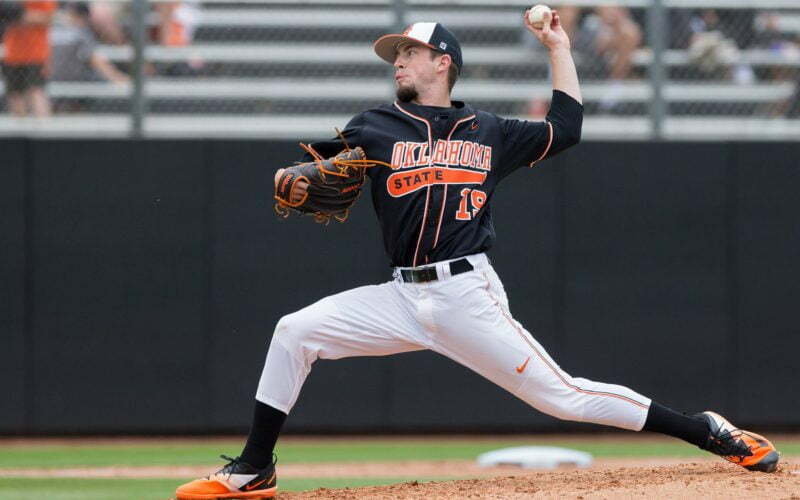 OKLAHOMA CITY — After taking Friday off in Oklahoma City, the Cowboys were back in action for the early 9:00 a.m. game against West Virginia in the Big 12 Tournament semifinal.

There was a lot of drama early but without any runs as Oklahoma State left eight runners on base through the first four innings. A lot of credit is due to some gutsy pitching by West Virginia’s freshman right-hander, Kade Stroud.

Stroud lasted  career-high 115 pitches without a run. His five and two-third innings and seven strikeouts were also career highs. The freshman right-hander showed a knack for both getting himself into sticky situations and for getting himself out. In the third inning, he gave up two-straight walks before retiring Garrett Benge on a ground out.

The Mountaineers finally broke the seal in the bottom of the fourth with a sac fly to right field leading to a Darius Hill score.

Lienhard and Stroud traded off 1-2-3 innings in the fifth. Cowboy freshman Cade Cabiness hit a single to get on base at the top of the sixth, ending a three-inning hitting drought for the Cowboys. It was only the third hit off of Stroud all day.

With two outs, the Mountaineers went to their bullpen. The move seemed to bring the Cowboys’ bats to life. After their freshman gave up zero runs and three hits in five and two-third innings, Jackson Sigman gave up a two-out walk and three runs to just two batters.

With two on and two outs and a going full count, Ryan Cash lasted 13 pitches before walking and loading the bases to give Garrett McCain a chance. The Big 12’s leading hitter took advantage. McCain sent one deep into left field for a three-run double to put the Cowboys on the board.

G-Mac getting it done! With the bases FOC, @GarrettMcCain clears them with a double to put #okstate up 3-1 in T6! #Big12BSB pic.twitter.com/AOlgwbDhx0

The Mountaineers would waste no time getting the tying run into scoring position with one out on a sac bunt by Cole Austin.

With West Virginia bearing down, Rob Walton went to left-hander Cole Hearrean to face left-handed batter Jackson Cramer. Hearrean fell behind 2-0 but secured a huge strikeout on three breaking balls. Unfortunately, a wild pitch allowed the Mountaineers to score and pull within one.

When the Mountaineers made a switch to insert right-hander Isaiah Kearns into the lineup, Walton went to his right-hander Jake Cowan who protected the Cowboys’ 3-2 lead to get them to the seventh.

Once again, the Cowboys left a runner in scoring position. After a two-out walk of Ryan Sluder and then a stolen base, Shane Ennis dealt Cade Cabiness his second strikeout to end the bring on the seventh-inning stretch.

Rob Walton went to his senior closer, Trey Cobb in the seventh who delivered two strikeouts and a 1-2-3 inning.

Trey Cobb pitched a good inning and a third giving up just one hit and no runs. Walton subbed in left-handed closer Carson Teel for Cobb in the bottom of the eighth to face up against West Virginia’s left-handed big-play threat, Cramer. Cramer was popped out by Garrett McCain to end the inning.

Cameron Dobbs missed on a fluky right field attempt that should have secured the second out. Instead it put Kevin Brophy in scoring position for the Mountaineers. Jimmy Galusky hit Brophy in with an RBI single, tying the game 3-3. Carson Teel stood fast striking out Kyle Gray to keep the Cowboys alive and force extra innings.

In the top of the 10th, pinch hitter Bryce Fischer doubled and Ryan Cash got hit by a pitch, sending Garrett McCain back to the plate. The All-Big 12 outfielder delivered again with an RBI double to put OSU back up 4-3.

Momma there goes that man again! @GarrettMcCain puts the Cowboys back on top with an RBI single in T10! #okstate pic.twitter.com/cutHObWSSN

After an intention walk of Colin Simpson, the Cowboys had two outs and the bases loaded when Dustin Williams came to the plate. Once again, the Cowboys left three stranded unable to put the game away.

Teel retired two batters before an error on a grounder sent Cole Austin into scoring position and brought West Virginia’s ninth-inning hero from Friday, Jackson Cramer, to the plate. Cramer connected for another deep fly towards the right field wall but once again a back-pedaling Garrett McCain was able to make the play, sending the Cowboys to their third Big 12 Tournament final.

• The Cowboys were led by All-Big 12 first-team selection Garrett McCain. In five at bats, McCain had three hits and four RBIs. McCain also had a huge game defensively including the final out to secure the win.

• It was good crowd for a toasty morning game in Bricktown. The non-Oklahomans looked a little nervous when the game stopped for the obligatory Saturday noon tornado siren testing.

• The Cowboys’ bullpen showed up and Rob Walton was masterful with his subbing. Getting a good inning from senior Trey Cobb and then opting to go with his left-hander, Carson Teel who kept the Cowboys alive. The two combined to allow just three hits and one run in the final four innings.

• Oklahoma State is the first 8-seed to start out 3-0 in Big 12 Tournament history.

• The Cowboys squandered multiple opportunities to put the pesky Mountaineers away, leaving 16 runners on base in 10 innings and twice leaving the bases loaded. Give credit to the depleted but tough pitching staff of West Virginia for getting some key outs.

The Cowboys are now just one win away from a Big 12 Tournament championship and an improbable NCAA berth. They will face the winner of Texas and TCU at 1:00 p.m. on Sunday in the Big 12 Championship final.