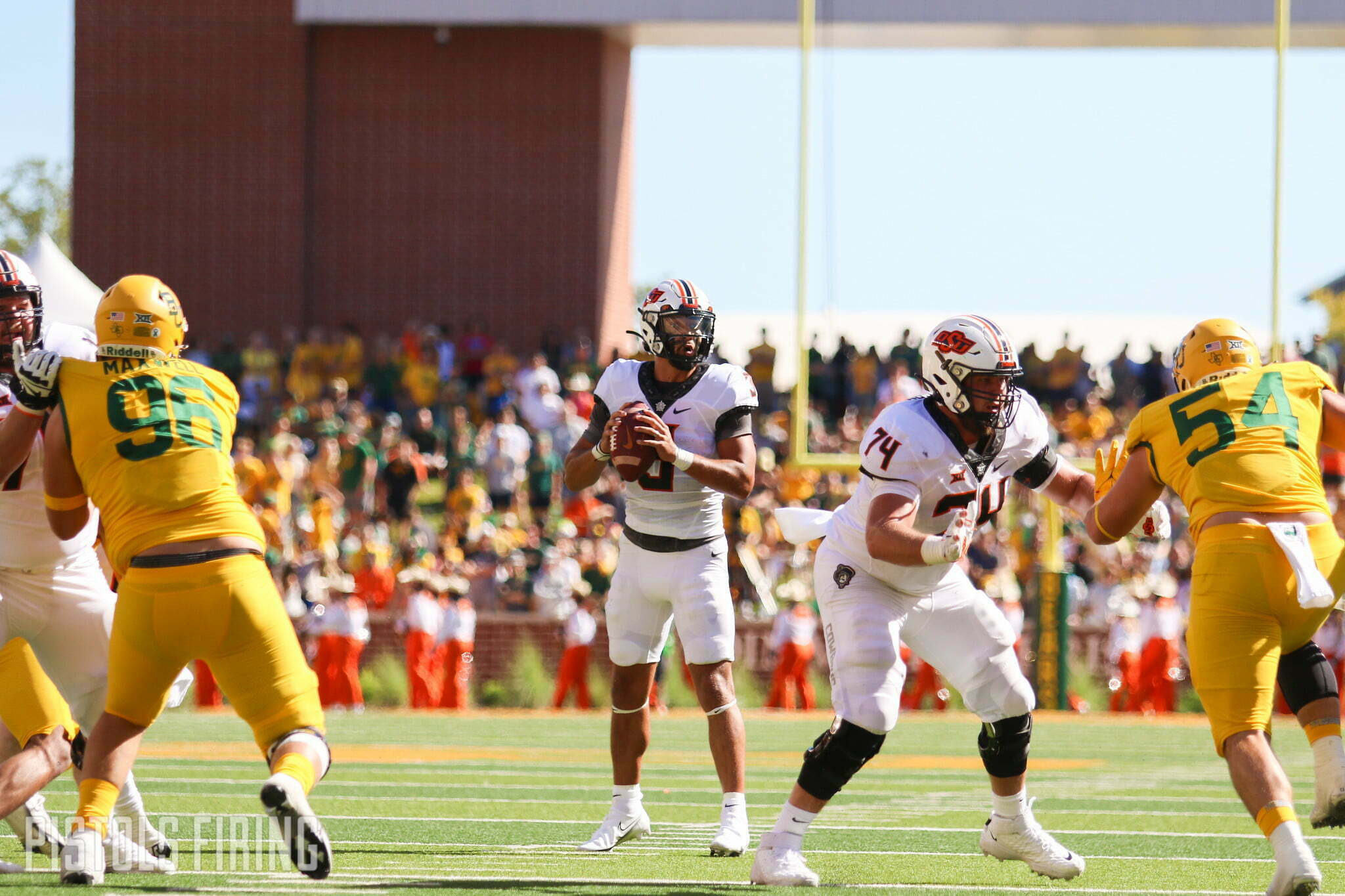 STILLWATER — In two games against Baylor last season, Spencer Sanders was sacked three times and hurried on eight other occasions. In Waco on Saturday, Sanders was hurried twice and didn’t hit the scorching turf unless he was on one of his 14 rush attempts.

When Oklahoma State beat Baylor 36-25 this past weekend, it avenged a lot of things — most notably a Big 12 championship defeat Arlington. But, it also avenged an offensive line that was put under a microscope and took shots of criticism to the shins all of last season.

The Cowboys were a yard away from a Big 12 title nine months ago, but with seven fourth-quarter snaps from Baylor’s 2-yard line or closer, OSU walked away with only a single field goal. OSU was tested in short-yardage scenarios early and often in Waco with different results.

The first instance came on the Cowboys’ opening drive. OSU had a 4th-and-1 on the Baylor 15, and Mike Gundy wanted to make a point instead of settling for an early 3. Spencer Sanders plunged forward on a quarterback sneak to extend the drive that ended in a touchdown.

“We went into this game since last year’s championship game and said, ‘When we get close to the goal-line or we get in short-yardage, I want our players to know that we can convert it,’” Gundy said. “Because we didn’t do it in the championship game. We didn’t coach them well enough. And that’s my fault, and the offensive coaches. And I said, ‘When we get in this situation they need to know whether [Siaki Ika] is in the game or not, we’re gonna sneak the ball, we’re gonna run the ball to convert.’ Otherwise, we have a hard time winning.”

Then in the second quarter, the Cowboys got back to the Baylor 1 for the first time in nine grueling months. Game-wrecking defensive tackle Siaki Ika invited the Pokes back to his playground, and it took only one play for the Cowboys’ O-line to push the Bears back and score.

The Cowboys got back to the 1-yard line in the third quarter and further proved their capabilities, again scoring on one play.

“They took a lot of criticism last year at the end of the season,” said OSU defensive tackle Brendon Evers, who practices against OSU’s O-line every day. “And pressure makes diamonds. … I wouldn’t expect anything less because I saw what they put in this offseason.”

In the two games last year, OSU ran for 3.4 yards a carry against Baylor. The Pokes ran for 3.6 this past Saturday. That’s not a huge difference, but the Cowboys mustered only 1.8 yards a rush in the title game.

There were plenty of caveats to that game in Arlington in regards to the Cowboys’ health. OSU was without then-starting center Danny Godlevske and then-starting running back Jaylen Warren. But it’s a new-look group on OSU’s offensive front.