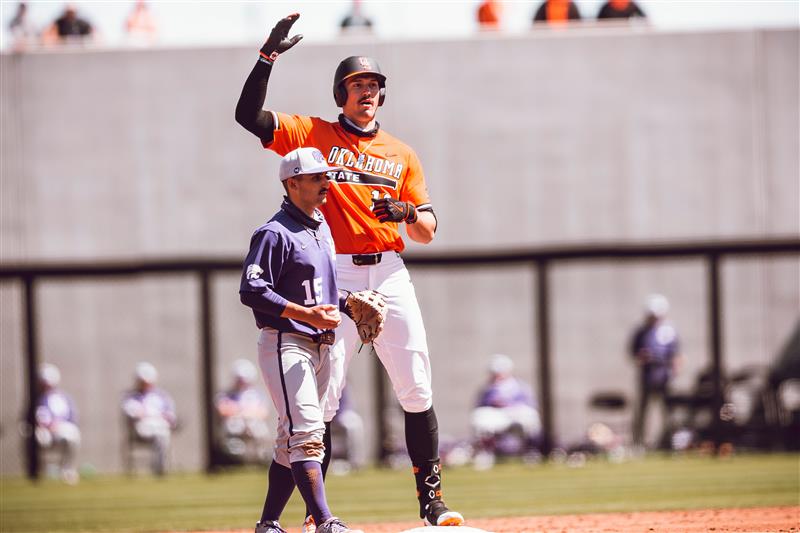 After two tough weekends against the nation’s elite, the Cowboys took some frustrations out on Kansas State.

Oklahoma State beat K-State 8-2 on Sunday to sweep the teams’ Big 12 series. The Pokes scored 26 runs the past three days. That comes after back-to-back weekends where OSU played No. 2 Vanderbilt and No. 4 Texas Tech.

“I think the players are getting used to being challenged,” OSU coach Josh Holliday said. “It forces them as hitters and as an offense to make adjustments and be more well-rounded if they’re gonna be successful.

“Probably the sooner you enter the crisis mode where you lose a few games and you’re forced to make adjustments, the sooner you can get to the very best version of yourself vs. cruising and thinking you have it figured out only then to realize down the road that you’re not as good as you think. We were given a wakeup call, or a reality check, early in the season that, hopefully, will serve us well.”

It was a nice game for Carson McCusker in his third game back from a back injury. He went 2-for-4 with two RBIs and a run scored. Through three games this season, he has a .333 batting average.

Christian Encarnacion-Strand also had his eighth multi-hit game of the season, as he went 2-for-4 with two runs scored and one RBI. The RBI came off his team-leading eighth home run of the year.

Justin Wrobleski got the start on the bump and had a no-hitter going through seven (despite giving up a run in the third). The no-hitter was broken when Zach Kokoska hit a home run in the seventh. Wrobleski finished the day having pitched seven innings where he gave up two runs on the one hit. He struck out nine and walked four.

O’Brate will host its first Bedlam this week, with Oklahoma coming to Stillwater on Tuesday.

OSU’s first four weekend series had some combination of Parker Scott, Justin Wrobleski and Bryce Osmond starting on the mound for the Cowboys, but that changed this weekend.

Freshman right-hander Justin Campbell started Saturday’s game and Wrobleski, who had primarily started on Saturdays, moved to Sunday. Osmond was the odd man out.

Like with outfielders, it’s a good problem for Holliday to have that he has four guys who could start on the weekend.

Campbell, who was also the Cowboys’ designated hitter Sunday, dealt while on the mound Saturday. He threw seven innings where he allowed two unearned runs and struck out 11.

Osmund is an exciting prospect, but the freshman right-hander has struggled to a 5.55 ERA in five starts this season. It’s important to note that the bulk of the runs Osmund has allowed this season came against Vanderbilt and Texas Tech, two Top-5 teams.

Campbell’s 0.35 ERA is great, but he didn’t pitch against Vandy and threw just two innings in relief against Tech.

“All four of our starting pitchers have been, at times, fantastic,” Holliday said. “Whether it’s having one of them in the bullpen on the weekend to increase our depth or keeping all of them in the rotation to stabilize the games, both strategies are important. In this particular run of games, this is the choice we made.”

Encarnacion-Strand is good for a home run about every weekend series.

His home run Sunday was his eighth of the year and second against K-State this weekend. The junior college transfer has been powerful and consistent for the Pokes, as his .330 batting average ranks first among Cowboys with at least 13 at-bats. He is hitting .0.522 through to Big 12 series.

He nearly hit a second home run in the seventh Sunday. He ripped another ball to left field, but K-State left fielder Jordan Maxson caught it against the wall.