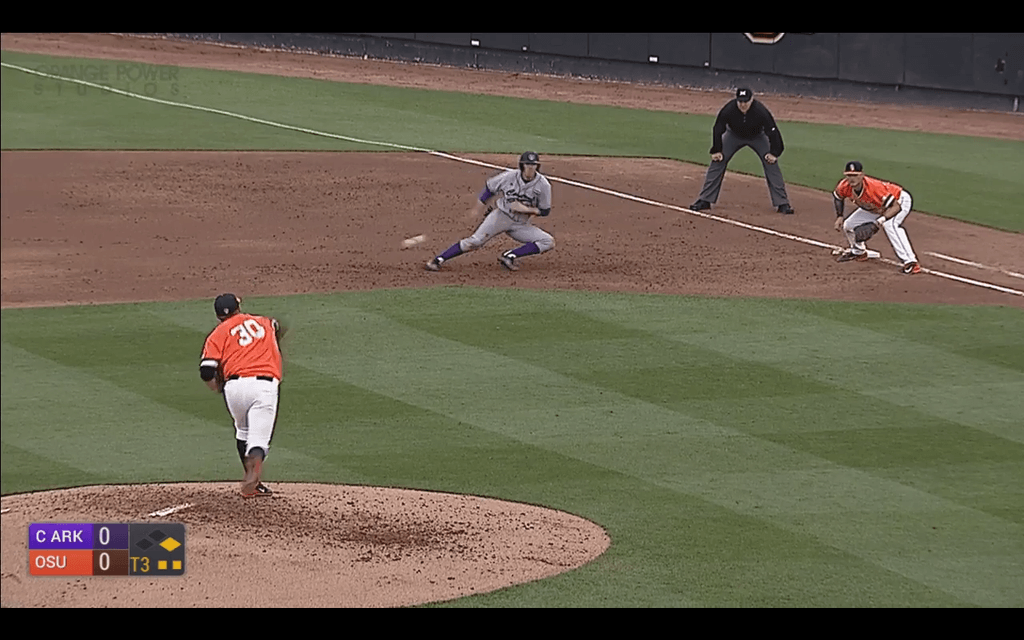 Welcome, disgruntled basketball fans! You’re just in time to jump on the bandwagon and support a team with insanely talented players and a coach who can count!

Oh, and if that’s not enough: OSU just took two of three from the best team in the nation. Here’s what you missed with Cowboy baseball last week:

Last week’s midweek opponent presented a much better challenge than Alcorn State the week before, but that wasn’t a problem for the Cowboys.

Remey Reed, who started his Cowboy career with a 9.1-inning scoreless streak, got his first start of the season and made a great impression. He pitched six innings, giving up one earned run on three hits.

His run support came from Gage Green and Garrett McCain, who both went 2-4 with an RBI. Corey Hassel also knocked in a run as OSU pushed its win streak to a season-best six games.

This top-25 matchup drew a lot of national attention, and Holliday & Co. made a strong statement to the rest of Division I that this team is reloading, not rebuilding after last season’s loss in the Super Regionals.

Friday’s game also spoke to the resiliency that Holliday has installed in this program since taking over.

TCU took an early 2-0 lead in the 1st, and most people thought that would be enough for the best pitching staff in the nation. OSU rallied, taking the lead in the 6th and again in the 8th.

Down to its last two outs, TCU hit a triple to tie the game and send it to extras. But in the 12th, Dustin Williams hit a two-out solo home run that proved to be the difference as OSU pulled off the upset.

One other positive was the return of Donnie Walton (more on that tomorrow).

Reigning Big 12 Pitcher of the Year Preston Morrison took the mound for TCU on Saturday and showed why he’s projected to be a first-round draft pick in June.

He struck out nine Cowboys en route to his fifth win of the season. His only blemish was allowing his first home run of the season, again off the bat of Dustin Williams.

It wasn’t enough though, and OSU’s seven-game win streak came to an end.

Michael Freeman started for the Cowboys on Sunday, looking for revenge after last year’s loss in the conference title game.

That was his first start for OSU, and the Horned Frogs tagged him for five runs on their way to lifting the trophy. The day belonged to Freeman, though.

The senior continued his breakout season with his first complete game, striking out nine while allowing five hits. The Cowboys took advantage of two TCU errors in the 3rd to lead 6-0, and the win gives OSU eight straight conference series wins dating back to last season.

Offensive Player of the Week
Dustin Williams, Soph. 1B

It was a breakout week for Williams, who hit .313 (5-16) and recorded a hit in each of the four games. He made the most of his hits though, blasting two home runs – including Friday night’s game winner in extra innings – and knocked in three runs.

He also drew three walks and scored four runs this week. His power and timely hits were a huge benefit to OSU’s successful week.

What a season he’s having so far! As if March hasn’t been impressive enough for Freeman already, he took the mound for the rubber match against the best team in the land and kept TCU in check all game.

I fully expect this performance to earn Freeman a Big 12 Pitcher of the Week award, and don’t be surprised if his name begins to appear on midseason award watch lists.

No better time to jump on the bandwagon!

Turning heads on a national level.

His return is a huge boost to the lineup.

Donnie Walton returns to #okstate lineup as he enters game at SS in b8. Had missed last 18 games after wrist surgery. Chappell moves to 3B

I love my team! Congrats @OSUBaseball taking 2 of 3 at #1 TCU! Freeman… Wow! Good to have Donnie Baseball back! @DWalt05 #OKState proud!