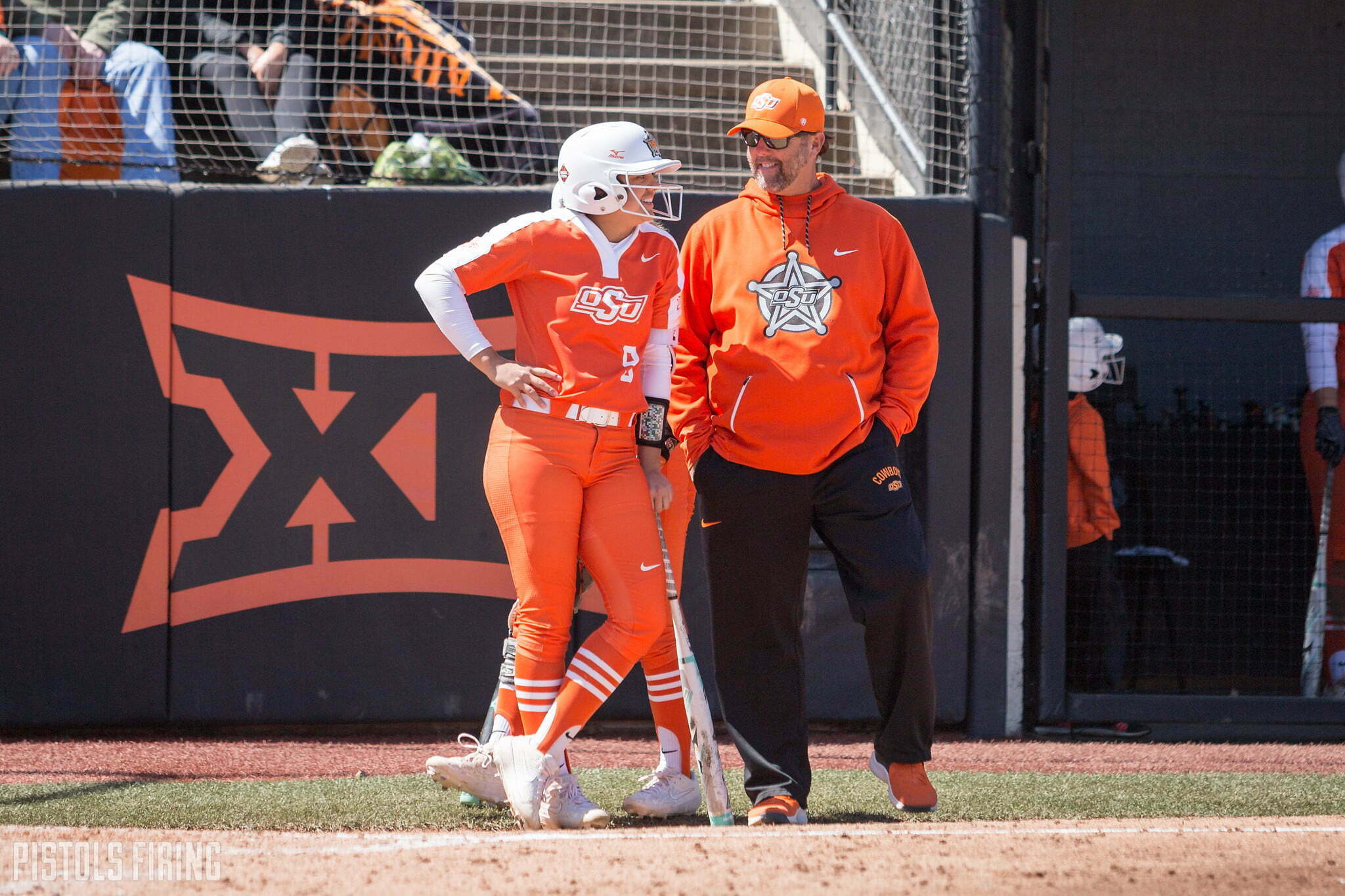 STILLWATER — The Sooners are on another level.

The top-ranked Oklahoma softball team completed its Bedlam sweep on Sunday in Cowgirl Stadium. The Sooners not only swept No. 12 OSU, they swept the entire Big 12, finishing the regular season 18-0 in conference play. Here’s a recap of the Bedlam series’ final two games.

After getting shutout in Norman on Saturday night, the Cowgirls scored their first run of the series in the first game Sunday. That’s all they got in that game, though.

The top-ranked Sooners won the series’ second game 7-1. OU had a 4-0 lead in the fourth inning when Samantha Show, who transferred from Texas A&M for her senior season, finally got the Cowgirls on the board this weekend with a solo home run off the scoreboard in right field. The home run was Show’s 16th of the season, breaking the OSU single-season record.

“Coach G made it clear to me when I came here that I wasn’t going to break any records,” Show said. “So, I didn’t come in here thinking that was even possible, so it was really cool.

“I forgot what week it was, but someone was like, ‘Oh, you’re so close to the record,’ and I was like, ‘What record?’ I had no idea. It was pretty cool to do that at home at least, to have our fans here supporting us.”

OU outhit the Cowgirls 12-2, and nine OSU batters were struck out.

The Sooners started their scoring early. In the first inning, Caleigh Clifton laid down a sac bunt that scored Sydney Romero. Romero, the Sooners’ lead-off hitter, finished the game 2-for-4 with two RBIs, two runs scored and a walk drawn. In the third inning, Romero hit a two-run home run to left, part of a three-run inning for OU.

The Sooners got some unneeded insurance in the sixth. Fale Aviu singled up the middle with the bases loaded, scoring Grace Lyons and Audrie LaValley. OU’s final run of the game came in the seventh, when a Lynnsie Elam groundout led to Nicole Mendes crossing the plate.

The Cowgirls started the game in a tough position. After Rylee Bayless had back-to-back impressive catches in right field, the Sooners scored three, two-out runs. The scoring started when Jocelyn Alo smacked a ball over the left-field fence, a two-run shot. Grace Green was OU’s next batter, and she drilled home run to left, as well.

The Cowgirls got a run back in the second inning when freshman Chyenne Factor hit her seventh home run of the season. However, OU added a run in the third and two in the seventh while stifling any attempted OSU offense.

The Cowgirls finished the series with six hits and 31 total strikeouts.

“Not the outcome we hoped for,” OSU coach Kenny Gajewski said. “Probably hope’s the wrong word. If you hope, you’re setting yourself up for some tough things. But, I just felt like we’d play a little bit better than what we did.”

The Cowgirls finished the regular season 37-14 overall and 13-5 in conference play, good enough for a second-place finish in the Big 12.

OSU will next be in action at the Big 12 Championship in Oklahoma City next Friday. The Cowgirls are in a pool with third-seeded Texas and fifth seeded Iowa State. Barring a major upset, the winner of that pool will get another shot at Oklahoma.

“We were able to adjust, but it’s taking us (time),” Gajewski said. “We’re immature at times. We’re in the process of getting to that point. We’re not as talented as (Oklahoma), but we’re also not as tough. What (OU coach) Patty (Gasso) has done, is she’s got the best players, and they’re the toughest in the country. That’s not normal. A lot of times, you have some talent, and that overrides things. Their toughness overrides their talent, and they’re already some of the best players in the country.

“When you’re not as talented, you gotta be tougher. That’s not saying that we’re not good. Don’t get me wrong. There at a level that’s here with one or two schools. Maybe UCLA. That’s it. Then it’s the next 15, and I think we’re in that next 15. I think we’ve shown that and proven that and earned that. But that gap between those schools and that next 13 or 14 teams, it’s a big gap. So, if you’re not tougher than what they are or can’t match that toughness, you’ve got no shot.”