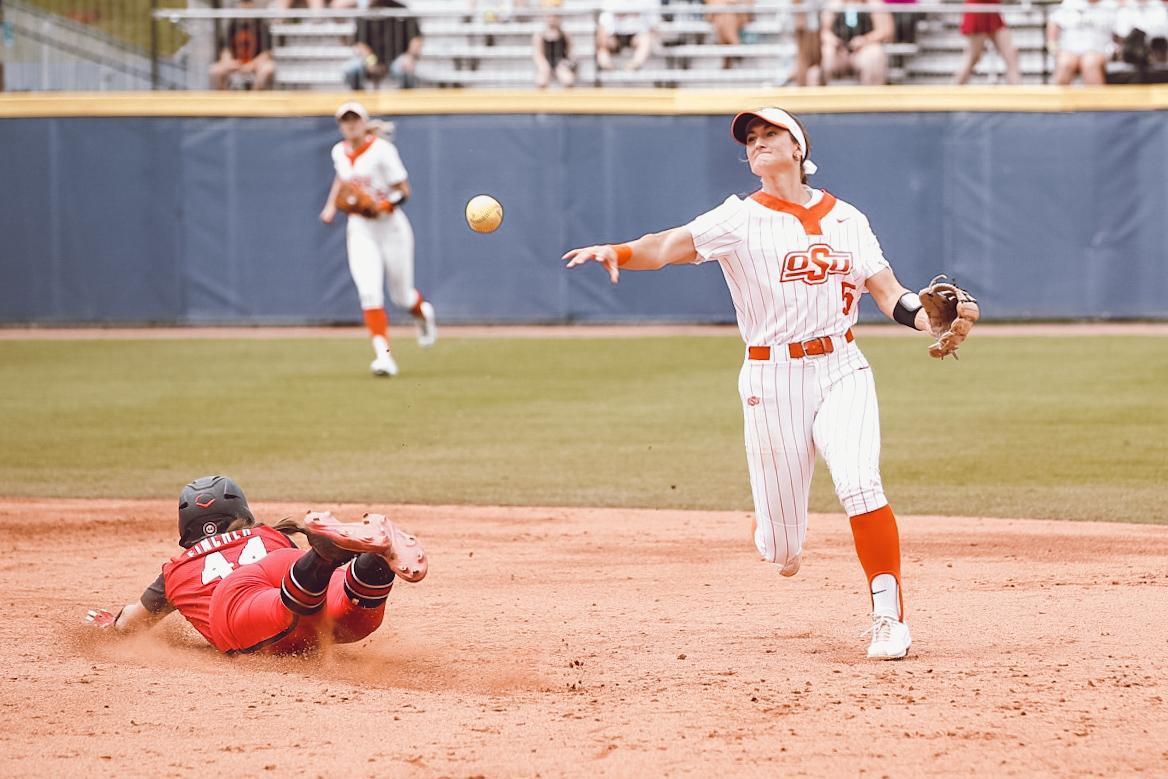 OKLAHOMA CITY — The Cowgirls made things interesting Thursday in the final frame, but a late insurance run advanced them in the Women’s College World Series winner’s bracket.

Oklahoma State topped Georgia 3-2 on Thursday at Hall of Fame Stadium after a dicey top of the seventh. Georgia shortstop Ellie Armistead hit a one-out double to left-center that cut OSU’s lead to a sole run and put runners on second and third.

OSU pitcher Carrie Eberle was able to maneuver out of the jam with militaristic precision. She forced an infield pop up that held the runners and forced a dribbler that Sydney Pennington was able to get to and record the final out with a throw to first.

An insurance run in the sixth ended up being a crucial score for OSU. Kiley Naomi hit a leadoff single in that frame. Chyenne Factor then moved Naomi to second with a sacrifice bunt, and Alysen Febrey, a transfer from Georgia, singled up the middle to score Naomi.

Factor didn’t record a hit in the Cowgirls’ Super Regional series, but she came up big in sending the Cowgirls on Thursday.

With freshman Avery Hobson on first and two outs, Factor, a junior from Yukon, crushed a ball to straightaway center to give OSU a 2-0 lead. It was her sixth home run of the year, a small figure compared to most of OSU’s hard-hitting lineup.

“It’s been no secret, I haven’t been having very good at-bats through Supers,” Factor said. “My first at-bat wasn’t very good. That pitch, it was kind of up if I remember correctly. I just decided to swing and not be defensive, and good things happen.”

Eberle, the Cowgirls’ ace — who is an All-American and earned Big 12 Pitcher of the Year honors — got the start in the circle. She proved why she carried so many distinctions, throwing all seven innings where she allowed the two runs off seven hits while striking out two and walking one.

“I mean, it’s what we see every day out of Carrie,” OSU coach Kenny Gajewski. “She’s given up three or four runs only twice this whole year. I’m not surprised. We had a couple unfortunate plays behind her. We had some really good plays behind her, as well.

“Carrie is just Carrie. She’s just a grinder. She just never gives in. I’m just so thankful that she’s on our side. It’s really cool to see her perform.”

Eberle got in a little trouble in the fifth inning. A single and a HBP put two Georgia runners on with just one out. Payden Bordeau then squeezed a ball through Alysen Febrey and Karli Petty on the right side. A charging Hayley Busby, known more for her offense, fielded the ball just past the dirt in right and rifled a ball to the plate to get Georgia’s lead runner out at home.

“The momentum really could have shifted there,” Eberle said. “But she shut it down. That’s what you need, what you’re asking for from her.”

Eberle was able to force a groundout to short to get out of the inning.

Busby nearly lasered another Georgia runner down in the sixth, but obstruction was called on OSU catcher Reagan Wright at the plate to score Georgia’s first run of the day.

A strength of Eberle’s game is keeping the ball on the ground, which plays beautifully into OSU’s electric infield defense.

OSU turned a 5-4-3 double-play in the first and had a 4-6-3 double-play in fourth. The latter was probably more impressive. Karli Petty fielded a grounder and made a backhand toss to Naomi, who calmly scooted across the bag and ripped a throw to first.

The Cowgirls’ win came off the heels of a monumental upset as James Madison knocked off No. 1 seed Oklahoma 4-3 in eight innings. The Dukes had to beat No. 9 Tennessee in their Regional and No. 8 Missouri in their Super Regional to even make it to OKC.

So, what was once thought to be a Bedlam battle in the winner’s bracket turns now into OSU matching up with James Madison at 6 p.m. Friday. OU and Georgia will play in an elimination game at 11 a.m. Saturday.