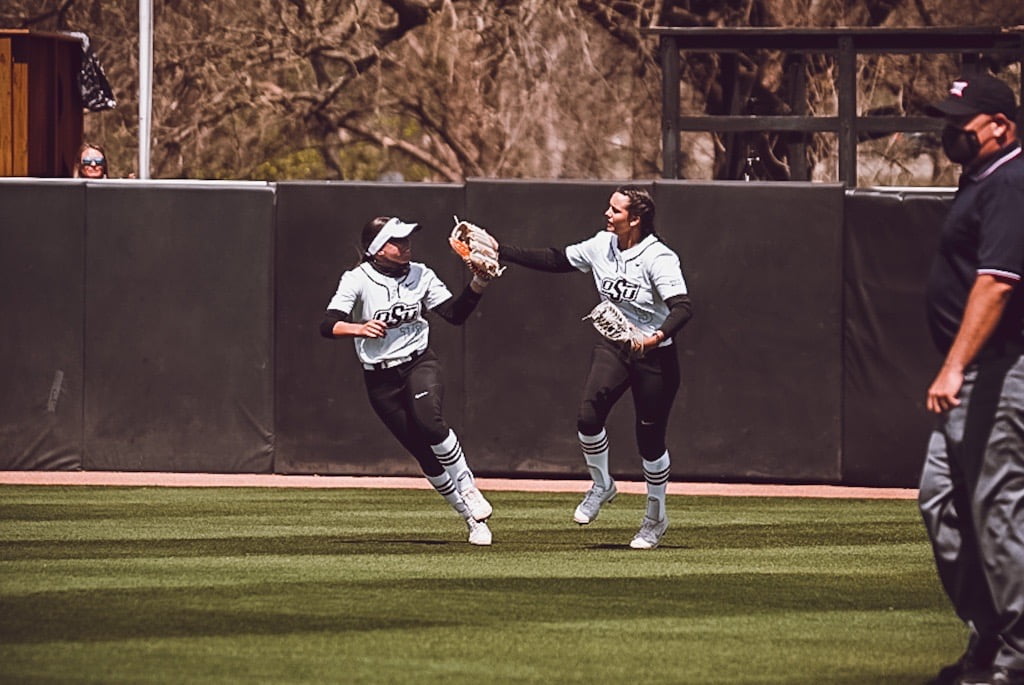 STILLWATER — It took extra innings for the Cowgirls on Saturday, but the result was still the same.

Oklahoma State beat Iowa State 2-1 in eight innings after a walk-off single from Hayley Busby scored Kiley Naomi. It made for a Cowgirl sweep against the Cyclones, and it was the second time this weekend OSU walked off, after Naomi hit a seventh-inning home run Thursday.

On Saturday, Busby, who took a ball off her foot in her previous at-bat, ripped a ball down the first-base line. Naomi scored from second after getting on with and infield single and advancing on a fielder’s choice.

“It’s gratifying to win the series, even more to sweep,” OSU coach Kenny Gajewski said. “Sweeps are hard. They’re not easy to get. I loved the way our girls answered the challenge.”

It was a tight game throughout. OSU senior pitcher Carrie Eberle pitched the whole eight innings where she gave up the one run on seven hits while striking out eight and walking three. She ended the day having thrown 163 pitches.

“Definitely tired,” Eberle said. “Felt like I was maybe running out of gas a little bit toward the end, but just had to stay tough and keep throwing in there and trusting my defense.”

Eberle was great at getting outs when she needed them the most, as she left nine Cyclone runners on base. For reference, the Cowgirls had just five hits Saturday and left five runners on base.

It was a day that invited home runs, as the wind was blowing toward center field.

Alysen Febrey hit her 10th home run of the year in her first plate appearance Saturday, going opposite field to left.

Iowa State’s Skyler Ramos had two strikes against her in the bottom of the fifth. A chant of “Sit her down” was echoing around Cowgirl Stadium before Ramos hit a home run to left-center.

She was stoked to say the least, hollering at the fans past the left-field fence, and she blew a kiss to the OSU dugout as she rounded third.

Ramos got hit the next time up, but it did seem unintentional because it came on a 2-2 count with two outs in the seventh inning.

Ramos was one of two Cyclones on in the seventh inning with two outs. Sami Williams, who has already hit 15 home runs this season, then popped a ball up to straightaway center field that got caught up in the wind. Chyenne Factor caught the ball running through the warning track before crashing into the wall saving at least a pair of runs if not a three-run home run.

“The wind was blowing out like crazy today,” Factor said. “It just kept carrying, and I was like, ‘Oh, God. I gotta be getting close to the fence.’ Then it finally came down.”

The victory puts OSU at 29-5 this season and 5-1 through two Big 12 series. The Cowgirls will travel to Lubbock to play Texas Tech next weekend.