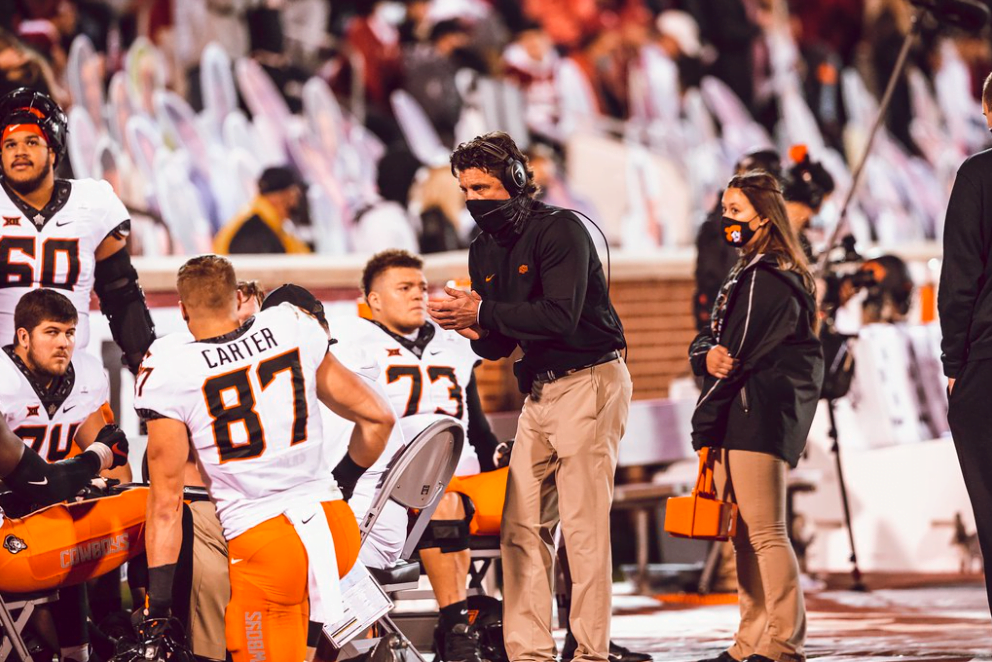 If we learn more about ourselves in failure than in success, then Mike Gundy, his coaches and his team have plenty to learn from Saturday night’s rout in Norman.

After a night to digest that huge crimson pill, here’s what I was able to absorb about this Cowboy squad from that one game.

1. There’s a Marked Difference in Talent and Depth

As much skill talent as OSU has, and as good as its coaches are at developing the two- and three-stars into four-star producers, there is still a vast difference in the talent Mike Gundy has to work with and the cache of dudes at Lincoln Riley’s disposal.

That disparity shows itself most often in the trenches and in depth at the skill position, or lack thereof. Both were issues for the Cowboys in Norman. We’ll get to the line play below, but a qualifier or two about the position players.

Few teams can lose their starting quarterback for two-plus quarters without missing a beat, especially if their No. 2 is a true freshman. Even fewer can sustain that and a hobbled All-American running back while a defense is able to scheme around your all-star wide receiver.

OU may not have record-setters at both running back and wideout, but it has a handful of guys that could start at 90 percent of FBS schools.

After the game Mike Gundy was asked if bringing down the type of athletes the Sooners field was harder than other teams, they’ve faced. He admitted that Riley has “good skill.”

In short, “It was a little more difficult today than what it has been, yes.”

Whether you want to admit it or not, talent matters. Recruiting matters. OU’s 2020 roster is ranked ninth in composite talent by 247Sports, boasting five five-stars and 45 four-stars. Oklahoma State lands at No. 42 nationally with zero five-stars and seven four-stars. That adds up to a very thin margin for error when the two teams square off.

2. A Reality Check for OSU’s O-Line

OSU’s injury-sparse offensive line was overwhelmed by the Sooners defensive front from the kickoff to the final whistle. There are plenty of reasons for this, namely a drawn-out game of “musical chairs” that has lasted all season, and then the loss of its best player, Teven Jenkins, in the first half.

The Sooners came in leading the Big 12 in sacks, and that front feasted on a hampered, out-of-position Cowboy line. The Sooners added to that lead, adding four more QB takedowns — including the suplex that landed Spencer Sanders on the sideline.

The Cowboys front had even less success opening running lanes for the likes of Chuba Hubbard and LD Brown. OSU’s 78 rushing yards were its lowest since the Central Michigan loss in 2016, and the Cowboys mustered just 2.8 yards per carry. That’s not going to get it done against a team that scored on its first five drives.

Minutes before kickoff, it was announced that OSU’s consistent sophomore kicker Alex Hale was injured in pregame warmups. That left the Cowboys in an uneasy position, trusting an untested walk-on freshman in a game that was decided between the goalposts in Norman in recent history.

But Brady Pohl was perfect, nailing field goals from 37 and 38 yards on the big stage and his only PAT. If the Cowboys are without their Aussie kicker moving forward, Pohl looks promising.

4. OSU’s 2020 Offense Has Been a Disappointment

Through seven games, we’ve seen enough to know that Oklahoma State does not have the offense to win a Big 12 title this year. It’s a disheartening realization, especially since it finally has a defense that could.

Every team has dealt with injuries and every team has faced the weird world of COVID so far. But at some point it matters what you put on the field and on the scoreboard.

Yes, the Cowboys have talent but regardless of the excuses or qualifiers, this unit has been a letdown this season, especially with how good its defense has been for most of the year. Imagine OSU with this defense in 2017.

5. Mike Gundy Does Have a Bedlam Problem

Okay, I didn’t learn this last night, but I’m viewing it from a different angle.

Leading up to this game, Gundy did his best in Zoom calls to dismiss the notion of this being anything more than just another game. He didn’t play into the rivalry routine, at least not publicly. But can you blame him?

Conversely, Lincoln Riley talked up the in-state clash and the unpredictability of a fierce rivalry. You can afford to be that gracious a host when you coming 3-0 against your guest.

It’s not a stretch to say that Gundy knows Bedlam better than anyone, in a way few ever will. He’s been a part of it as either a player, assistant or head coach for the majority of this life and has suffered far more defeat than victory.

Each coaching decision carries that much more weight. Every third-down choice is scrutinized as arm-chair head coaches turn into arm-chair psychiatrists. And that’s fair game. It comes with the territory and should be expected when you make $4 million per year on a rolling lifetime contract.

If we could view this game on its own, without the lopsided history and baked-in Squinky references, it would be easy to reconcile Saturday’s results given some of the OSU issues mentioned above and the play of the surging Sooners who are closer to full strength than they have been all year.

But we can’t and Gundy will never have that luxury, partly due to his failures in past Bedlams and partly because of the unequivocally tough position any head coach faces when playing second in-state fiddle to a juggernaut. That’s neither meant to be an excuse or an indictment. It’s just Gundy’s reality, and it doesn’t appear likely to change any time soon.