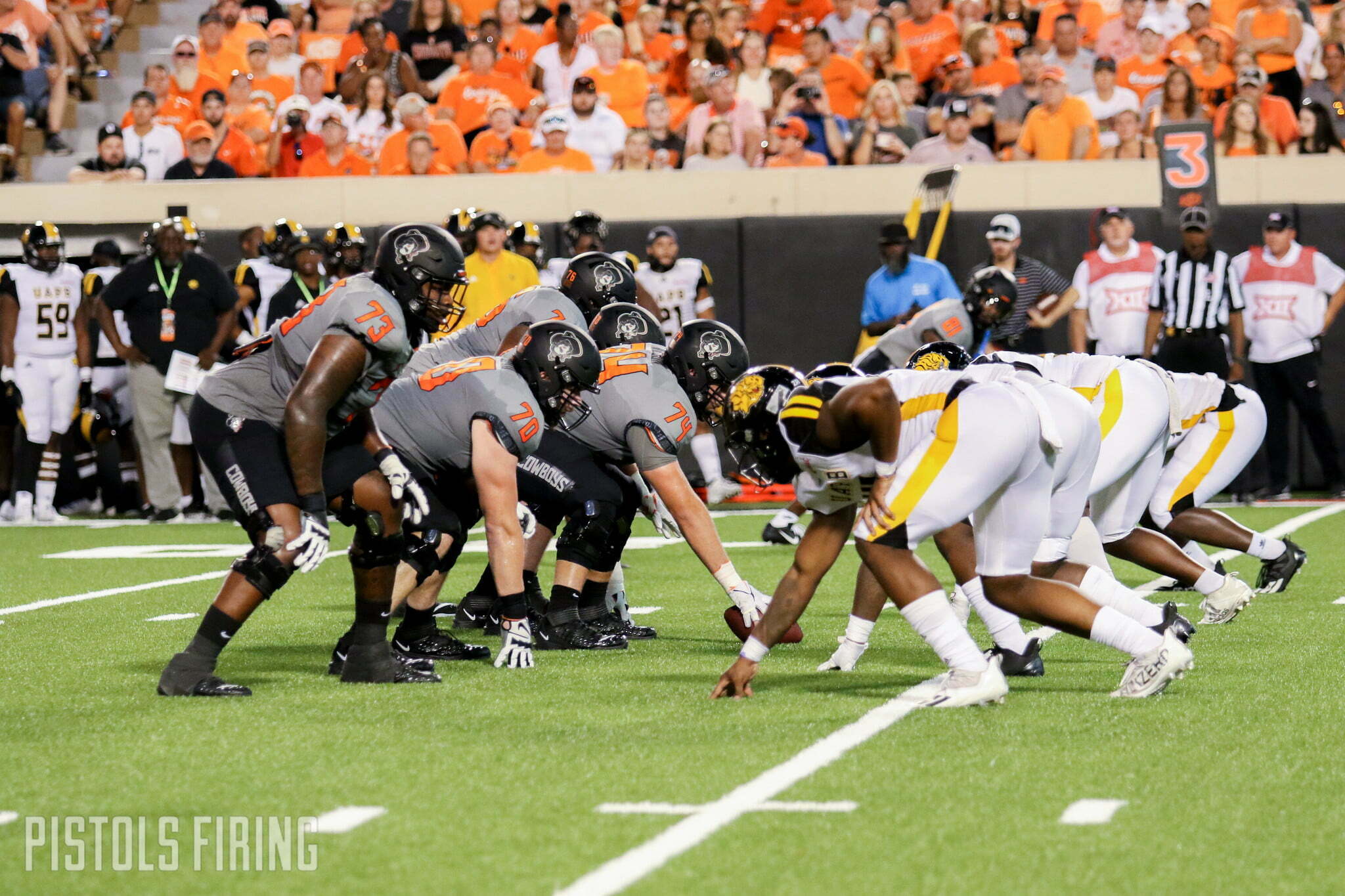 Oklahoma State handled its business against an inferior opponent and did so without reason for consternation. The Pokes put their foot on the gas and left the Golden Lions in the dust. Other than a couple of turnovers, there wasn’t much to gripe about. UAPB’s one score came off of an interception and a shortened field.

We got to see three quarterbacks, and Mike Gundy got to rest his starters and give his young players some valuable reps. The 1s looked good. The 2s looked good, and the 3s and 4s looked good for the most part.

There were lots of deep balls, a trick play and a pair of special teams scores. I’m not sure that there is a ton we can glean from this one other than the fact that OSU did what it was supposed to. What else could you ask for?

Here’s a look at my scribblings from throughout the Cowboys’ big win.

• First off, those unis are 🤏. I am unabashedly team gray-jersey, and this is the best way to use them in terms of a color scheme. It’s a shame that it’s only the third time we’ve ever seen B-G-B.

• Sanders goes for deep on the first play, but the ball was underthrown to Braydon Johnson. The UAPB defender ran over Johnson who had to come back for it and, drawing a P.I. My name is Spencer Sanders and things just work out for me.

• Sanders found Brennan Presley for 36 yards and then went back to Johnson again for a 24-yard score. That was fast. OSU up 7-zip after two official pass attempts from Sanders.

• Let me correct that. My name is Spencer Sanders, and I make things work out for me.

• How expensive are jersey letters? That’s always bothered me. These FCS schools land a pretty paycheck for playing in Stillwater. You can’t put their names on the back? Go nuts.

• With less than four minutes off the clock, OSU is up 14-0. This could get out of hand quick.

• Kayvon Britten with some tough running, picking up 15 yards. The Cowboys have shown a propensity to give up chunk plays this year. We’ll see if that trend continues today.

• Nick Martin runs into the kicker but UAPB, would rather just go with the punt as it sits. The penalty would have still made it fourth-and-6. He’s earned a reputation for violence on the field. It seems that even carries over to kickers.

• The Cowboys go three-and-out, but worst of all Spencer Sanders comes up limping a bit. If OSU can get to 21-0 I’m 100 percent fine with putting No. 3 on ice.

• But the Golden Lions turn in their own three-and-out.

• The Cowboys cruise down the field this time. Sanders is a cool 9-for-11 for 149 yards and two TDs. That’s a pretty tight stat line.

• And now UAPB gets a roughing-the-kicker call. This game has everything.

• And OSU squib kicks and recovers. Now this game really has everything.

• Sanders is slicing them up and spreading it out. The Cowboys march back down the field and Brennan Presley joins the touchdown party. Braydon Johnson has two and John Paul Richardson has one. OSU 35-0.

• Sanders came in T-1st in points responsible for. I think he might find himself in lone first place by the end of this one.

• After getting OSU out of its own endzone, Dominic Richardson fumbled it in the scrum, and the Golden Lions take over at the OSU 22-yard line. That’s the second time Richardson has put the ball on the ground in as many weeks.

• And that’s three consecutive incompletions for Skyler Perry, and the Golden Lions will kick it from 39 yards and might just get on the board.

• Nope. Another special teams scoop-and-score. This one thanks to Sione Asi and Korie Black — 42-nothin with still 11 minutes left in the second. UAPB comes up empty-handed after that strip at the edge of the red zone.

• Nick Martin just destroyed a UAPB receiver and stopped him in his tracks. That play helped stall the drive.

• This would normally be a game in which I drill down and clip every nice block by a Cowboy back, but ESPN+, so…

• Ugh, so Gunnar’s first career interception goes to UAPB after Braylin Presley can’t hold onto it. UAPB will take over at the OSU 23.

• The Golden Lions take advantage of the short field and score on a third-and-2 from the 15. Raequan Prince snatched the ball from over Ray Gay’s head and then caught it against his own helmet. There will be no shutout. 42-7, Pokes.

• Gunnar had a nice scramble for 11 yards for the first down, but it gets called back for a Joe Michalski holding call. No. 12 has a little pep in his step, though.

• Stephon Johnson Jr. all over this drive. Good to see the young guys getting some reps.

• Gunnar finds Talyn Shettron in the corned of the end zone. First career TDs for both of them (hopefully of many). 49-7, OSU.

• The Cowboys take a 42-point lead into halftime.

• The Cowboys somehow recorded their first sack of the game in the third quarter when Ben Kopenski dropped Perry for a six-yard loss.

• And two plays later, Kopenski does it again. This time he drops Perry for a five-yard loss. That’s two sacks in three snaps. He had a total of one sack in his career before Saturday.

• Gunnar Gundy took off with an eye on the imaginary yellow line and then gave the defender a head-fake that didn’t work. He got drilled by a UAPB defender.

• And Gunnar takes off again and picks up 11 yards and a first down. His helmet got peeled off and that adds 15 more yards.

• Lol, Gunnar tipped a high snap and then tried to flip to his receiver. That was definitely going to be six going the other way had the UAPB cover man hauled it in.

• Cale Cabiness, of Cale Cabiness fame, just took a short pass, turned up field and then made three Golden Lions miss before diving into the end zone. Pokes up 56-7 early in the third.

• The ESPN crew just called Ollie Gordon “the excitable freshman.” I like it.

• UAPB’s second-string QB Jalen Macon found Kenhi Lewis for a 38-yard touchdown that looks like it will get called back. Lewis stepped out of bounds inside the 15.

• And we’ve got a Garret Rangel sighting. He rushed twice and threw one pass before the Cowboys went three-and-out. We’ll see if he gets another chance to put something on tape.

• The Cowboys did lose the turnover battle 2-zip, which is not ideal. Gunnar’s pick was off of Braylin Presley’s hands. Also, he attempted his first pass in college on that same series. Good game for him, I’d say. The Dominic Richardson drop was his second in as many games which is a tad bit more concerning.

• But the Cowboys thumped ’em and get to go into an off week without a ton to complain about. We’ll see you in Waco.