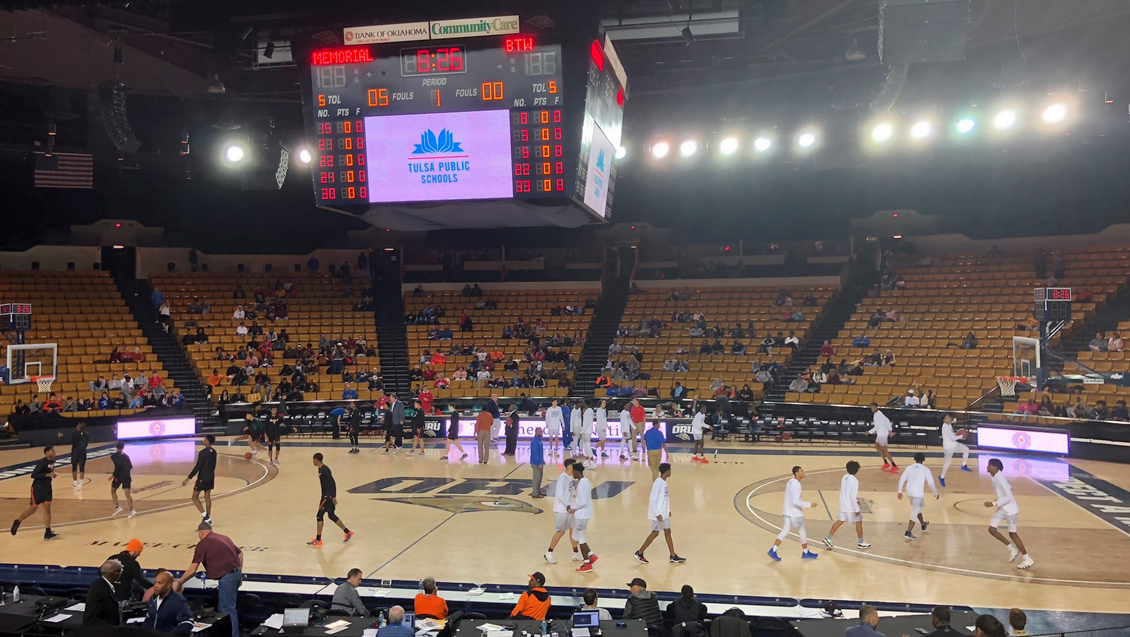 As Oklahoma State fans across the state were jumping up and down with glee watching Alabama put a thorough beatdown on OU on Saturday night, three of the best basketball prospects in the state were on the hardwood at the same time in the Tournament of Champions title game.

All three should be names OSU fans are intimately familiar with: OSU signees Kalib and Keylan Boone out of Tulsa Memorial, and OSU target Bryce Thompson, a 2020 recruit, from Booker T. Washington.

Because the Mabee Center is just down the road, I decided to take a gander. Here’s notes from what I witnessed.

• Oklahoma State sent its entire coaching staff to watch the game, which definitely was planned to likely try and make a good impression with Bryce Thompson, a top-100 talent who is a top priority for OSU. That includes Mike Boynton, John Cooper (and his son), David Kontaxis, and Scott Sutton. Arkansas coach Mike Anderson and an assistant were also courtside.

• Big Country was also in attendance! The Muldrow girls played in the game before Tulsa Memorial-Booker T., so he was there to watch. He has children who have attended Muldrow.

• Bryce Thompson is an absolute monster. He had a game-high 25 points, and after watching him, I’m convinced he could play big minutes for OSU … like right now. Can create his own shot, create for others, and is ? hitting buckets off the dribble. Super smooth.

• Not a complaint but a random observation with Bryce: He shoots (and makes) a lot of long 2s. Imagine that will change when he gets to college, but hard to knock because it feels like he makes them all.

• Keylan got about as many touches as Blake Jarwin in a big game at OSU, which definitely felt a bit off, but he made good on his opportunities. Finished with 15 points, had several opportunities to give Memorial a fighting shot in the closing minutes.

• Keylan’s handle is probably the biggest area I feel he can improve in. To that end, unleashing the next level of his game is probably hitting shots off the dribble with more consistency. He and Bryce need to hook up for some offseason work.

• The only player who did more with less than Keylan was Kalib. Unlike Keylan, who plays on the perimeter, Kalib plays down low and relies solely on other players getting him the ball. Still, he had 14 points and by my count, 5 blocks (including a two-swat possession in which he swatted Bryce Thompson into the bleachers).

• Kalib Boone finishes everything around the rim. He’s going to end up shooting something insanely efficient like 96 percent at OSU. Every time he gets the ball within spitting distance I feel like he’s scoring.

• Speaking of … Kalib is officially my vote as the most plug-and-play ready freshman next year. Everything he does well is immediately translatable — he runs the floor, protects the rim at an elite level, and can finish lobs/clean up around the rim. Maybe not the starter at center from day one, but find it difficult to see him not earning some sort of rotational role.

• Mike Boynton wore the interlocking OS flatbill. It is a v, v good look for him. Easily the most swaggy coach courtside on Saturday night.

• With Booker T. trying to essentially play keepaway with a lead down the stretch, Kalib Boone was battling foul trouble. Which stunk. But I liked what I saw from Keylan — attacking the rim, trying to get his shot and get his team back into it — when the Chargers needed a spark.

• Trey Phipps, a TU commit, was shut out in the first half. Then exploded with three big 3s in the second half to give Booker T. new life. Really solid player. Probably not a Power Five prospect because of his size and limits athletically, but going to be great for Frank Haith and Co. Good shooter.

• I also really liked what I saw from Bryce Thompson in crunch time. Didn’t try to take over, stayed within himself, made the smart plays/passes without being too aggressive and costing his team. Was the best prospect on the court.