And because I love Jimmie Trammel too. This is great from Cezar: “I live for these moments.” (Tulsa World)

Gina with a good feature on the unlikely rise of Alex Elkins. Includes this gem from Gundy: “He’s kind of a lost art. The old-fashioned tough guy.” (NewsOK)

Weeden and Blackmon are finalists for college football’s player of the year award (not the Heisman). (CBS Sports)

Bill Haisten notes that OSU has led for 288 of a possible 300 second half minutes this year. (Tulsa World)

It’s scary how many of these guys OSU gets in-state. (okstate.com)

I said on Twitter last night that we can’t keep calling him “Hail Cezar”, that’s way too easy. The Mexican Assassin is nice, and OMGuerrero isn’t that bad either in print, terrible to say out loud though. (CRFF)

Olin Buchanan with a great point here: usually you don’t want to be the guy who follows the legend. At OSU, you do. (Rivals)

Not to go all buzzkill here, but it was UTSA, let’s just remember that. (NewsOK)

Ten Cowboys have interceptions. No other Big 12 team has more than seven. (ESPN)

Really interesting article by KC Joyner for those who have ESPN Insider. He looks at which team creates a title game problem for other teams. (hint: LSU and Bama would struggle with OSU). (ESPN Insider)

Berry Tramel says Brandon Weeden has a good arm. Really taking some chances with the posts these days, eh? (NewsOK)

So the Landry Jones getting his tires stolen prank wasn’t actually a prank. (NewsOK)

Sarah Palin says we need to “hang [Jerry Sandusky] from the highest tree.” Still not totally sure why we have a faux presidential candidate weighing in on a college football scandal here. (Dr. Saturday) 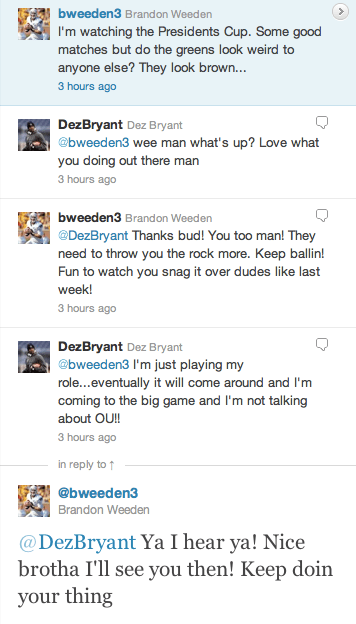 Credit to the guys over at Orange Power on this one, it’s pretty good:

Finally, here’s the Cezar video if you missed it from my earlier post.