OSU Tulsa kickoff at 9 PM on Fox Sports. At least I don’t have deadlines for my game stories? (NewsOK)

Interesting breakdown of schools that made money on their athletic programs in 2009-2010. OSU was one of those schools. (CBS Sports)

Is wrestling on the rise as a major collegiate sport? (Tulsa World)

This is my favorite piece from the Blackmon Q&A yesterday:

Q Connor Murphy: Can you be anymore awesome?
A Weeden2Blackmon: not sure wat ur askin lol

You can read the entire transcript here. It’s kind of strange to see such raw dialogue on OSU’s web site. It’s (presumably) unedited considering there’s a misspelling in literally every question and/or answer. For whatever reason though I kind of like it, seems to make the entire thing more real. Also, we learn Blackmon really really really loves bacon.

Rickie Fowler is wearing an orange bracelet to support a scholarship named for a Virginia girl who died in a car accident. (Fox Sports)

Esquire has some advice for Peter Uihlein and Rickie Fowler and their respective U.S. Open outfits. 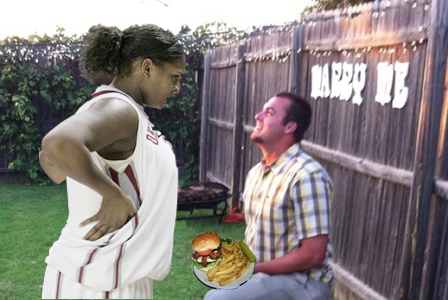 Great picture of Peter Uihlein and Louis Oosthuizen after Uihlein holed out on #5 yesterday.