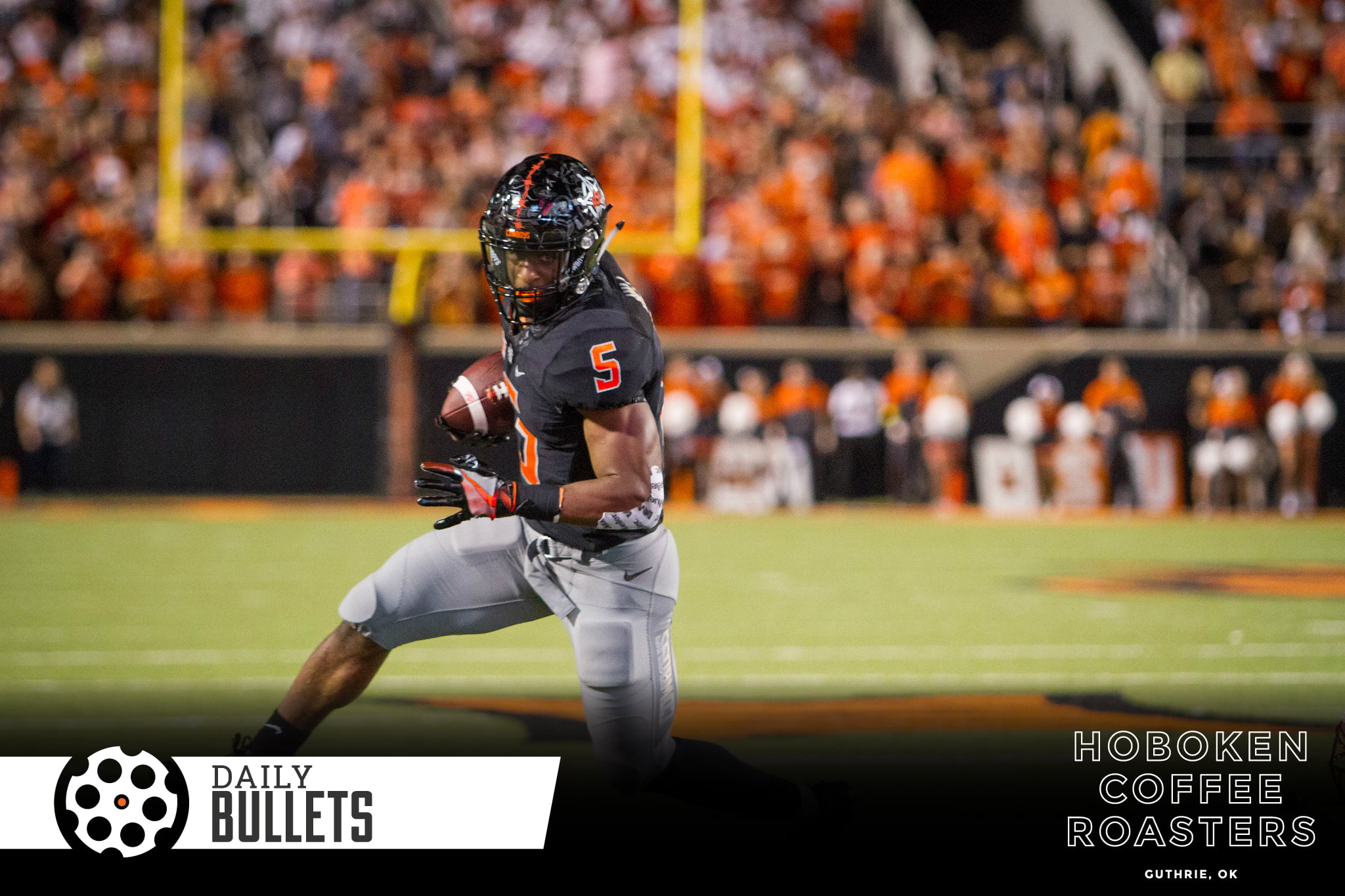 Happy birthday to Aunt Bullets – as hyped up as having a boy first is, there’s immense value in having a loving old sister. At least when you have one like I do, happy birthday Sis.

• Kyle Cox digs the Justice Hill-to-Baltimore pick so much that he laid down an interesting take.

Baltimore added Pro Bowler rusher Mark Ingram during the offseason, and returns productive second-year back Gus Edwards, but Hill should vie for a role as a change-of-pace back and I think he will see the field a lot, and early.

In fact, I’m doubling down on my bold prediction from before the draft. I said that by season’s end Justice would have more career TDs than his former teammates Mason Rudolph, James Washington and Marcell Ateman combined despite their two years in the league. [PFB]

That all hinges on how much action Washington gets in the Steelers’ offense with lead man Antonio Brown heading west. It’s unlikely if he gets the No. 2 role behind Juju Smith-Schuster but I don’t think it’s a crazy take on Cox’s part either.

• Gundy has been hammering his squad about the details this spring.

I think that’s one thing he’s really going to harp on this season is to make sure he’s holding us accountable and making sure things don’t slide,” said Wallace.

In Gundy’s view, letting things slide was the primary reason Oklahoma State was so undisciplined at times on the field last fall.

“I didn’t know that’s what was going on, or I would have fixed it,” said Gundy. “We’ve cleaned all that up. We’re on track now in my opinion.” [The Athletic]

Football’s a game of inches and Gundy’s 2018 squad was unlike those before it – putting lots of inches in front of themselves with penalties and undisciplined errors. It doesn’t appear that’ll be the case again.

• Here’s a fact that’s easy to overlook when you consider the dropoff from 2017 to 2018 Cowboy Football.

Last year Oklahoma State had James Washington, Mason Rudolph, Tre Flowers, and Marcell Ateman go in the draft and all four made teams. On top of that Chris Lacy, Zach Crabtree, and Brad Lundblade made it on NFL rosters either active, injured reserve, or practice squad. That is seven NFL contributions in one cycle, the difference between a 10-3 season and a 7-6.  [GoPokes]

It’s crazy to me that OSU could have won nine or ten games after losing those names. That seems to be the definition of reloading and not rebuilding.

• Enjoyed watching the clip from Saturday watching Justice Hill get picked and the commentators talking about his impact:

• Congrats to the Cowgirls on hosting a fifth-straight regional.

For a fifth-consecutive year, Stillwater is home to an NCAA Women's Tennis Regional! https://t.co/yXFYNcUE1m pic.twitter.com/SxBOYSDXe4

• After forgetting my elderly neighbor’s name five times, I decided to read about how to become a name wizard

• Loved this quote pulled from this faith-based review of David Brooks’ new book:

Students are taught to engage in critical thinking, to doubt, to distance, to take things apart, but they are given almost no instruction on how to attach to things, how to admire, to swear loyalty to, to copy and serve. The universities, like the rest of society, are information rich and meaning poor. [TGC]

This New Yorker piece had some great stuff on Brooks’ story and current stances, his stuff is always so thoughtful.

This highlight is an Air Congo swat away from perfect.

NBA fans were robbed of what could have been the greatest team, ever. pic.twitter.com/qw221APyMT