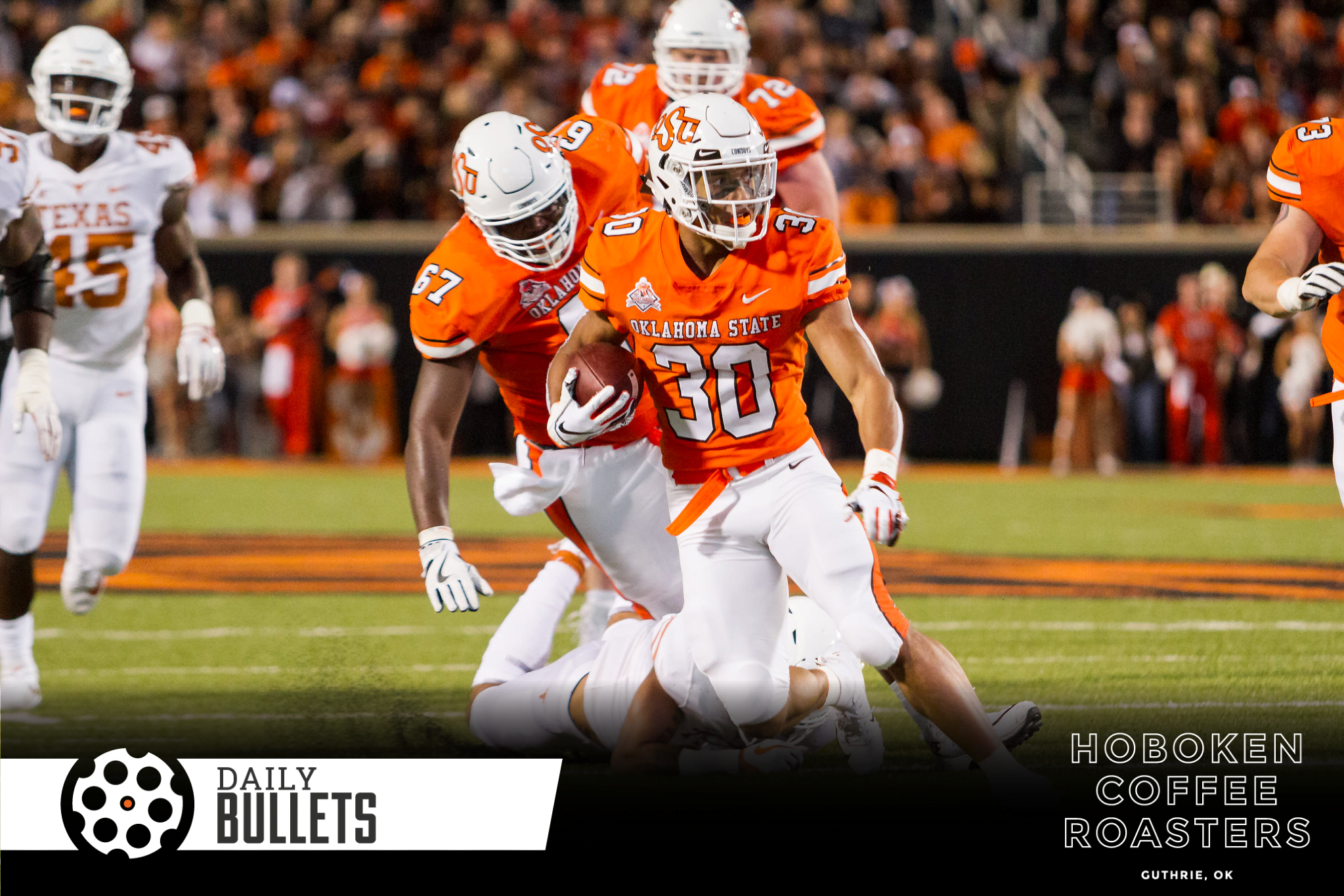 Don’t forget, we’re offering three free months to PFB+ if you use the code MONTHLYMULLET on a monthly plan right here.

• Herbstreit shows some love for the Pokes?

Herbstreit had a lot of love flowing toward an OSU he didn’t graduate from and that doesn’t have the word “The” in front of it. Tylan Wallace was one of his three finalists for “Most Exciting Player” and even though, Purdue’s Rondale Moore won it and I can’t argue with that. I love that Tylan got the shout out from college football’s number one television analyst.

The very next category was “Breakout Player” and even though Alabama linebacker Dylan Moses was the winner, Herbstreit sounded like his favorite in the category was Oklahoma State running back Chuba Hubbard. He poured on the compliments for the Cowboys Canadian speedster that can also play like a bull. [Go Pokes]

I’m always bemused by how much importance we place on what Kirk Herbstreit or Joel Klatt thinks about so and so. They’re just … people who watch a lot of football. Before diving into this industry, I used to have a disproportionate sense of how much stuff “experts” knew about. It’s not insignificant, but it’s not as significant as we make it out to be.

• I enjoyed this from Bill Haisten taking a look at the ridiculous numbers from the last decade of QBs in Stillwater (and Norman).

In 20 seasons during the ’60s and ’70s, OSU tossed 116 touchdown passes. In 2010-18, as Brandon Weeden and Mason Rudolph broke all program records, and as QBs like Clint Chelf and Taylor Cornelius developed to a point at which they could post impressive yardage figures, there were 289 touchdown passes. [Tulsa World]

That’s an amazing stat, but this one was even better.

This is among the reasons why Bob Stoops was hired in December 1998: During the 1998 season, no Oklahoma receiver had more than 14 catches.

Since Week 5 of the 2008 season, Oklahoma State has been nationally ranked for 99 of 139 games. That’s why Cowboys fans shouldn’t feel insulted by the lack of a 2019 preseason ranking or that Oklahoma State totaled only three voting points and is the 43rd team overall on the voting list. Oklahoma State usually finds a way.

Being ignored in August means nothing. Being relevant and ranked in November — that’s the goal. [Tulsa World]

“It’s been going good,” Jacobs said about his recruiting process. “It’s going smooth. There’s colleges in my ear and it’s been certain colleges that still stick around like Ok State, they’ve been in my ear heavily. So, I appreciate that. Man, coach [John] Wozniak hits me up almost every other day, if not every day. And coach Gundy hits me up the same way.” [Go Pokes]

I’m happy to cover a team that “surprises” every year when it’s 8-2 with two games left and everybody is looking around like, wait, what?

• Need a Marshall-after-dark thread to pub some of his Slack comments on OSU’s basketball recruiting. What feel like mega-longshots in football don’t as much in hoops. Time will tell though.

• Berry on OSU and OU’s place in the history of CFB.

• Seth breaks down OSU’s success in wrestling by each athletic director’s era.

• Heard from several folks who were there that this event was a blast.

Thanks to the Cowboy family for all you do for our student-athletes and for attending the POSSE auction. Had a great time celebrating the 1995 @OSUCowboyGolf Champs! #okstate #GoPokes pic.twitter.com/pb70kX60of

• Zero surprises here, but Viktor leads on the KFT.

• Faith-based productivity tips. These are good!

• The Adults in the Room — whoo boy, that’s some heat.

• On what it was like to be a writer on Friends.