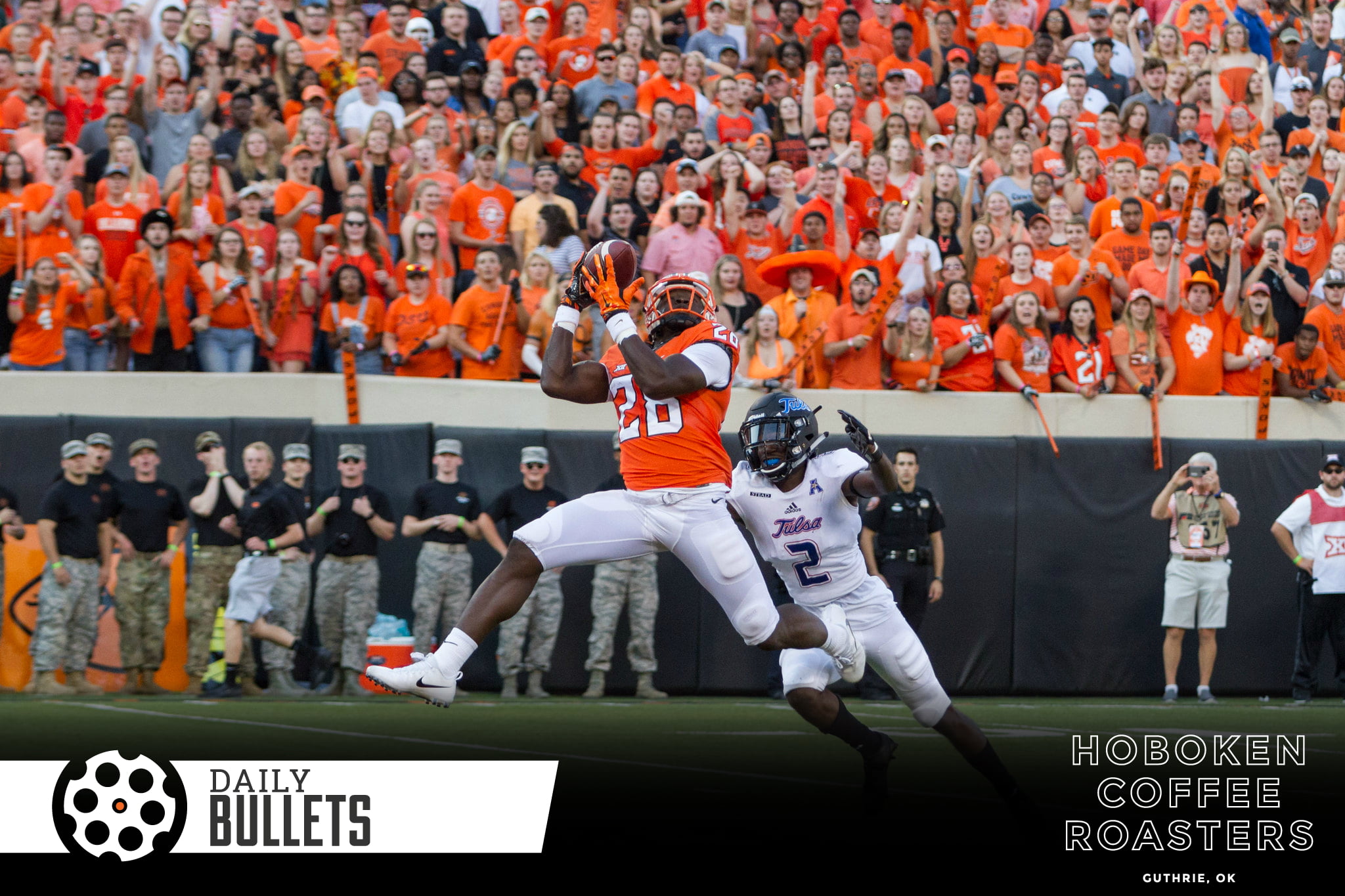 It’s incredible that outside of some Bill Haisten comments in the winter, nobody has been able to pry any information about who’s leading in this QB race.

• With what we can compare to this point in Tylan Wallace’s career – is he better than James Washington (was)? Kasey Dunn weighs in on the differences.

“Tylan is a better route-runner,” said Dunn. “He’s got equal ball skill. That includes downfield. James just had this explosiveness, power that was unmatched. He was so strong to the ball.

“Tylan is a better route runner. James was better down the field making that longer ball play. Tylan makes some great ones down the field too. James just had this ability because he weighed 220 to hold his line and outmuscle a guy for it. Tylan is more finesse down the field.” [PFB]

Washington had other-worldly ball tracking – out-of-this-world ball tracking. They both are deep ball specialists that found themselves as the best in college football at what they do. Per Dunn, they just accomplished this differently.

• Jim Knowles is predicting four of the incoming freshman will see some solid action this fall – and it’s no surprise that three of them will play in the unproven front six of the defense.

Oklahoma State defensive coordinator Jim Knowles could see as many as four true freshmen working their way onto the field this season.

• This is one of the more comical aspects of Cowboy Football – how different is life as a 29-year-old freshman than as an 18-year-old freshman? Cowboy punter Tom Hutton is uniquely qualified to share about one end of that spectrum.

“I think he’s doing well,” said Gundy. “He’s married and his wife’s here. She said that bed check was kind of weird at the end of the day, so I said that we probably don’t need to bed check Tom anymore. He’s 29 and he’s worked five years at a paper mill for 10 hours a day, so he somewhat understands going to bed at night. [GoPokes]

Having been both 18 and 29 – but being a freshman at 18 – it’s truly difficult to imagine how different that experience would be.

Going back to the topic at hand – apparently, Gundy forgot to tell Hutton about the change in policy.

This is the first I’ve heard of it, but I’m not complaining! 😂

“When a quarterback scrambles, it becomes a completely different play. It’s what we call a scramble drill,” Knowles said. “Certain guys in the back have to pull their trigger to stop the quarterback. Other guys have to what I call ‘plaster.’ There’s no more zone or anything. You’ve got to plaster on a receiver and take him.” [TulsaWorld]

I don’t know how to compare Spencer Sanders and Dru Brown to Taylor Cornelius and his scrambling capabilities – he was a sneaky good scrambler, sort of a taller and lankier Clint Chelf. But I do anticipate a little more mobility from better quickness, that’ll be fun to watch.

• I could go for a Trey Reeves-version of this non-conference schedule release. A farm boy from Gans could surely rustle up something similarly impressive.

• It’s early in summer camp but Mason Rudolph is in third on the depth chart and James Washington has slotted in behind Juju Smith-Schuster as opposed to across from him – we’ll see how it goes.

-Ryan Switzer ahead of Eli Rogers at WR
-Josh Dobbs listed as No. 2 QB despite good moments from Mason Rudolph at camp
-Devin Bush a backup ILB but will play a lot. pic.twitter.com/Exho91Jp47

• This on speed in the workplace was interesting

• What the Utah Jazz did this off-season was fascinating

• I’m rereading the Harry Potter’s this summer (total nerd) but it’s been super fun. Finished book two earlier this week and it’s been a treat.